Thank You For Your Service

Award-winning Film about Veterans and PTSD will have its Wisconsin premiere at the Barrymore Theatre in Madison Wisconsin on Tuesday, October 25, 2016 at 7pm.

The Madison Arts Commission is pleased to support Housing Initiative’s presentation of the Wisconsin premiere of the film “Thank You For Your Service,” a film by Tom Donahue. Collaborating partners include: NAMI Dane County, Dryhootch, Wisconsin Veterans Museum, Catholic Charities, and Veterans for Peace.

The screening will be followed by a discussion moderated by Dean Loumos, executive director of Housing Initiatives that will highlight how the issues raised in the film relate to members of our local community and the crisis of homelessness in Madison.

Mayor Paul Soglin states, “Housing Initiatives and the many great partners they have brought together to program this powerful documentary and discussion are doing critical work to care for our veterans. I hope Madison residents take this opportunity to go to learn more about these important issues and the organizations that are working to address them.”

“I’m a big believer in the power of art to catalyze important community conversations such as: What is our responsibility to those in our community who put their lives on the line for our country? & What is our community doing in response to the crisis of homelessness in our veteran population?” says Madison Arts Program Administrator Karin Wolf. “Film is an incredible medium to help us begin to understand the often invisible wounds that these soldiers have suffered and are suffering still.”

Proceeds from the event will be donated to Catholic Charities for the operation of a new day shelter for our homeless neighbors.

For over 20 years, Housing Initiatives has ended homelessness for 600 men, women, and veterans who suffer from a mental illness by providing them with a permanent home and supportive services to help them lead a healthier life. The Madison Arts Commission supports artistic activities and initiates cultural programs that integrate, support, and advance arts and culture as an essential part of life in Madison. 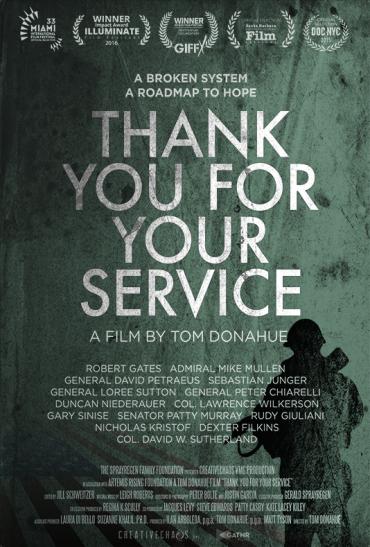