In his mural proposal to the Madison Arts Commission, artist and organizer Henrique Nardi wrote, “In 2014, right after moving from São Paulo to Wisconsin, I learned that Otis Redding, ‘the king of the soul singers,’ died in a tragic plane crash in Madison.” He added, “I believe that having a public artwork about Otis Redding in Madison is a great excuse to reconnect the city to this great American soul artist in an uplifting way while honoring his musical legacy. It is also worth pointing out the favorable timing for this homage: 2016 is the year Otis Redding would be 75 years old, and 2017 will mark the 50th anniversary of his death.”

The Madison Arts Commission reviewed Nardi’s request at their October 2016 meeting and unanimously agreed with the Brazilian graphic designer and letterpress printer and UW Art Department design professor who moved to the Eastside of Madison in 2014.

“We are excited to have two members of the internationally known Brazilian collective Criatipos collaborating with a local artist to create of Criatipos’ signature works of art for Madison,” Criatiposs tates Madison Arts Commission Chair Barbara Schrank. “This homage to Otis Redding is special because in honoring Redding’s legacy here in Madison, Try a Little Tenderness offers a timely and inspiring message. We were all taken with the artists’ vibrant lettering style.”

Lynn Lee, MNA President said, “When I heard of the proposed mural, I was happy to find a place for it in our neighborhood due to our proximity the original tragedy, we are a neighborhood known to value art and music, and after recent events and conflicts, it's a great message for all who live here to remember.”

The artists will be working on site at the Solidarity Realty building at 1148 Williamson Street beginning November 1, 2016. Visitors are invited to walk or ride by between 10am and 4pm to see the mural making in progress, but please don’t disturb the artists while they are working. Instead, people who want to meet and thank the team in person should show up at an informal and unofficial celebration on Thursday, November 3 at 8:00pm at the Weary Traveler Freehouse at 1201 Williamson St. (look for the poetry in the sidewalk in front of the Weary).

About Murals and Sidewalk Poetry in the Williamson St. Marquette Neighborhood:

Several years ago, prolific community muralist and neighborhood resident, Sharon Kilfoy, led an effort between the Marquette Neighborhood Association and the City to create a neighborhood public art plan that included both a Sidewalk Poetry Program and a desire to encourage more murals on privately owned businesses. Steadily, MNA has been working with the Madison Arts Commission to do just that. This summer, six more poems by Madison Poets Laureate, past and present, were installed along Jenny Street as part of the reconstruction of that street. Next week, the neighborhood will be adding another mural to their growing collection.

About the Madison Arts Commission:

The Madison Arts Commission (MAC) is a municipal commission that funds artistic activities and initiates cultural programs that integrate, support, and advance arts and culture as an essential part of life in Madison. MAC has been proudly supporting murals and other art in public places since 1977. 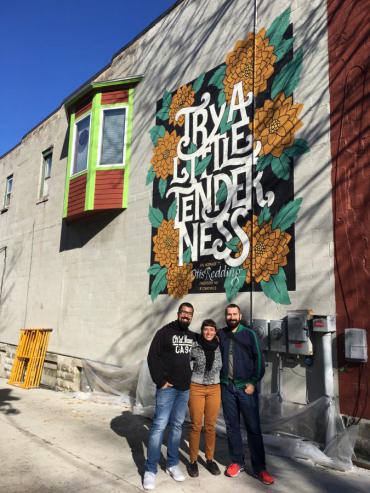 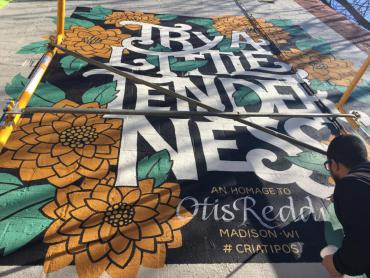