Water use in Madison drops for 6th straight year

Pumpage totals for 2020 are in, and they reveal a continued shift in the way Madison uses water. Twenty years ago, Madison Water Utility pumped more than 12.2 billion gallons of water to homes and businesses across the city—a record high. But a lot has changed since then. Last year, the utility pumped just 8.7 billion gallons, the lowest since 1966. It is the 6th straight year water use in the city has dropped.

The more than 28% decline in water use over the last two decades is caused by several factors, including more efficient toilets, showerheads, washing machines and dishwashers, wetter than normal summers, and the loss of industries like Oscar Mayer.

The COVID-19 shutdown last spring also had an impact on water use in 2020. UW Madison, the city’s largest water user, closed much of its campus on March 16. Eight days later Gov. Tony Evers issued the statewide Safer at Home Order. During the shutdown, water use in Madison dipped by about 2 million gallons a day.

What does this decline in water use mean for our city? First, it means a healthier aquifer, the sandstone geological formation below our feet that provides all of the city’s water. The U.S. Geological Survey has measured water levels in the aquifer below the isthmus for many decades. After a period of record drawdown in the late 1990s, we are now seeing the water highest levels since the mid-1950s. In the short-term, it can also mean increasing usage rates, as the city works to replace aging infrastructure, like mains, pumps, reservoirs and well facilities.

Madison Water Utility has been working hard to encourage conservation through its popular Toilet Rebate Program, which has saved more than a billion gallons of water since 2009. In 2014, the utility launched Wisconsin’s first online conservation tool that allows customers to track their weekly, daily and even hourly water use from a computer or smartphone.

It may seem counterintuitive for an organization that is completely funded by water sales to encourage people to use less. But we are stewards of this critical resource, and we all have a responsibility to protect it. Learn more about how to conserve by visiting MadisonWater.org/Sustainability. 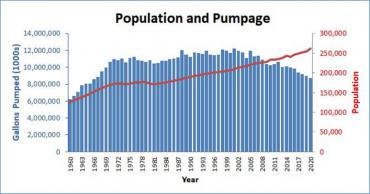