Madison BCycle and City of Madison Renew Operating Agreement Through 2030

Following 10 successful seasons of bike share, Madison BCycle and the City of Madison have renewed their operating agreement to continue operating the electric bike share program in Madison for another 10 years. The agreement includes an option for an additional 10-year renewal of operation after that.

“BCycle has become an important part of Madison’s transportation system over the last 10 years, and I’m delighted that we are renewing our contract with BCycle until 2030” said Madison Mayor, Satya Rhodes-Conway. “I’m looking forward to another decade of innovation in transportation, including integrating BCycle with the BRT system. Thanks to all the folks at Trek, BCycle and the City that have made this possible.”

Since its launch in 2011, Madison BCycle has generated more than one million rides, with more than 115,000 riders using the system to experience Madison as a commuter, resident, or visitor. The system has grown from 27 stations and 270 traditional pedal bikes to 50 stations and 300 electric pedal-assist bikes. Madison BCycle became the first bike share system in the country to convert to all e-bikes in June 2019, which sparked a 124 percent growth in ridership from 2018.

“In this changing and uncertain environment, we believe it’s more important than ever to create effective and adaptive bike infrastructure,” said Helen Bradley, General Manager of Madison BCycle. “We will continue to grow our station footprint and provide safe, accessible transportation by bike; renewing our operating agreement with the city is a very encouraging step in making that happen.”

Madison BCycle’s plans for the future include expanding the system down key transportation corridors like East Washington and South Park St. and into new neighborhoods. The program will add more electric bikes next year to help meet the demand for this mode of transportation.

About Madison BCycle
Madison BCycle launched in May 2011 and has since grown to include 50 stations and 300 bikes throughout Madison's downtown and surrounding areas. Riders can check out a BCycle at any B-station, ride to where they need to go, and park at the closest B-Station to their destination. Madison BCycle is one of many bike share programs revolutionizing the way people get around, including similar programs in Austin, Milwaukee, Los Angeles, Philadelphia, and more cities across the United States. Madison BCycle is owned and operated by BCycle LLC, a fully owned subsidiary of Wisconsin-based Trek Bicycle. Learn more at http://www.madisonbcycle.com.

About BCycle
Headquartered in Waterloo, WI, BCycle LLC develops and delivers best-in-class bike share systems and is committed to providing an environmentally sustainable transportation alternative for cities. BCycle believes that bike share is the bicycle’s role in public transit and is on a mission to change the world by getting more people on bikes. BCycle, a fully owned subsidiary of Trek Bicycle, partners with organizations across the country to deliver community-based bike share. For more information, visit www.bcycle.com. 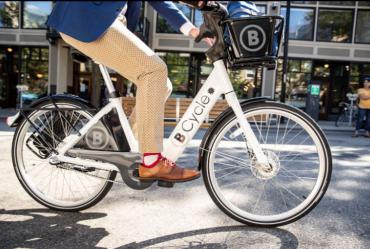