Sunday, November 20, 2022, marks World Day of Remembrance for Road Traffic Victims. The City will join community partners from the Vision Zero Task Force in honoring victims of traffic crashes, and their families, in Madison at a press conference on November 15 at 10:30 AM and through a display that will be set up through November 21.

“I know from personal experience how awful it is lose a loved one in a traffic crash,” said Mayor Satya Rhodes-Conway. “Those who died have families, children and friends, and in some instance were just children themselves. As we remember the people lost, we also renew our commitment to ending traffic fatalities through awareness and the thoughtful redesign of our streets to be safer for all users.”

In the last five years, 57 people were killed on streets throughout Madison in traffic crashes. The Madison World Day of Remembrance event intends to demonstrate the devastating impact that traffic deaths cause in Madison and that traffic safety stakeholders are taking action to make our streets safer.
The event signifies a greater urgency for Vision Zero Madison, as three people biking have been killed in Madison this year, when only four people biking have been killed in the last five years.

“It has been an awful year in terms of how many people were killed while biking,“ said Harald Kliems, president of bike advocacy group Madison Bikes. “Every death is one too many. We have a responsibility to remember those who died in traffic. And we have a responsibility to do everything to build a Vision Zero city: No more traffic deaths, no more serious injuries, no matter how you travel through our city.”

Traffic related deaths are preventable and the City of Madison and the Vision Zero Stakeholder Task Force want to highlight changes that will make our City safer – including lowering speed limits and re-designing roads that support those reduced speed limits as well as providing safe spaces for people walking and bicycling. Madison joins with many other cities across the United States and the globe in supporting changes to make travel safe.
The World Day of Remembrance is an international event, started in 2005, honoring the 1.35 million people killed and millions more injured on the world’s roads each year and organizing change to prevent such tragedies. 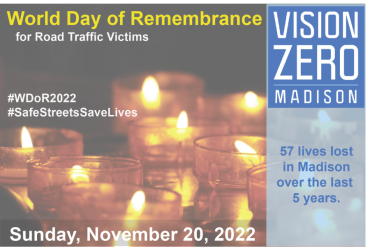