Madison Water Utility is exempting late payment fees until further notice. We recognize that for many of...

Water use in Madison hit an all-time high in 2001, when Madison Water Utility pumped 12.2 billion gallons of water from wells across the city. Since then, water use has dropped by more than 27 percent.
Madison Water Utility also tracks the annual per-capita water use of people living in single-family homes, and the change is even more dramatic. In the early 2000s, people in Madison used an average of 75 gallons per-person, per-day. Last year, that number was just 50.8 – a 32 percent drop and a new record low. It’s a full ten gallons per-person less than five years ago.

Madison Water Utility General Manager Tom Heikkinen points to a combination of factors for the drop – more efficient appliances and plumbing fixtures; the loss of industry in Madison, like Oscar Mayer, which had been the city’s biggest water user; and a decline in outdoor watering because of several unusually wet summers.

“I think the most surprising thing is the consistency of the trend, it’s almost always in the downward direction,” Heikkinen says. “50 gallons per-person per day on a residential use basis is something that is well below what the textbooks say that you need to plan for a water system. It was not really thought that we would be getting that low.”

The decline in water use translates into a healthier aquifer system. The city pulls its water from a natural aquifer formed by layers of sandstone deep below ground.

DeMorett, a hydrogeologist, notes that aquifer water levels in the center of the city were on a decline from the 1950s to the late 1990s, dropping to a record depth of more than 130 feet in 1998. But over the last 15 years, there’s been a turnaround.

“(The aquifer) is a resource that we’re really blessed to have. You don’t want to go from a surplus to a mining situation where you’re not replenishing it,” he says. “At the current pumping rates, it looks like we are sustainable. In fact, the aquifer levels are actually increasing. I think that’s the biggest thing. We want water for our future generations.”

In 2006, the city set a sustainability goal of a 20-percent drop in per-capita water use by 2020. Madison surpassed that goal last year. Madison Water Utility has been working hard to encourage conservation through its popular Toilet Rebate Program, which has saved a more than a billion gallons of water since 2009. And more than 12 thousand people are now tracking their daily water use online through the utility’s web-based conservation tool. 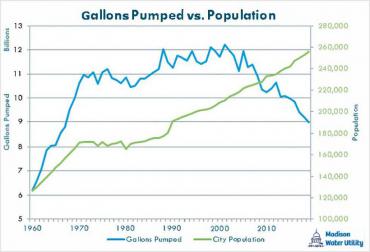