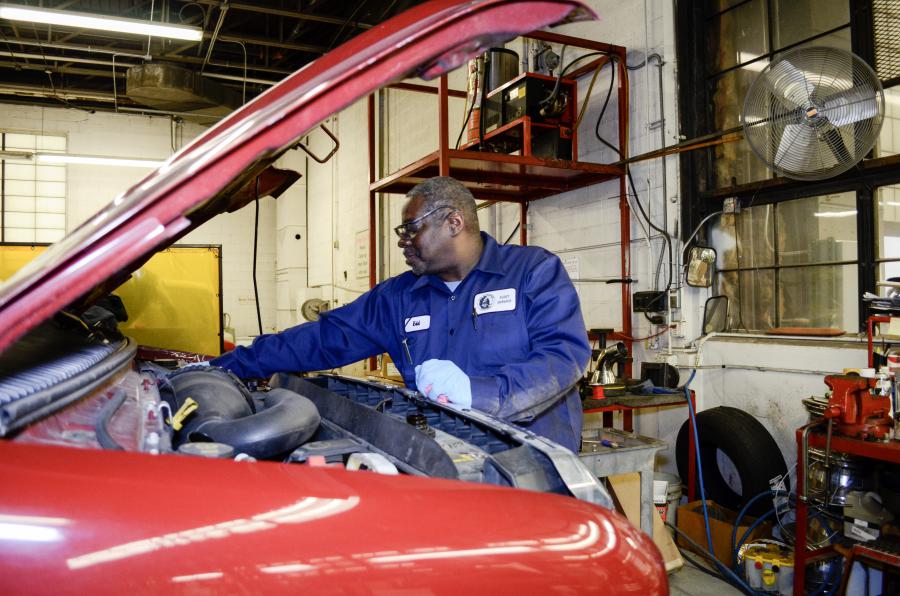 Edd Steele is one of the most cheerful technicians in Fleet Service. If you come to our First Street Garage and you hear someone laughing, there’s a good chance it will be Edd. Not only is he cheerful, he is always willing to assist. In fact, when I came here for my interview prior to being hired, he saw I was lost and, with a smile, helped me find the conference room.

Edd is mainly responsible for maintaining and repairing ambulances, large and small fire equipment, and every now and then he works on the air packs that the Fire Department uses. In other words, Edd is one of the mechanics in charge of making sure that the ambulances and fire trucks are operating correctly to keep Madison’s residents safe.

As a mechanic, he has worked in most Fleet locations including working for only 2 weeks in our Badger Road shop covering for another technician while they were on parental leave. Now, many members of the emergency response team know him. He remembers one time when an ambulance stopped at his neighbor’s house. He was outside doing some yard work, and they recognized him. They called him over and asked if he could help them fix a latch, which he happily helped with.

Another anecdote he fondly remembers was a time he was driving an ambulance to identify a noise when driven above a certain speed. As he was driving the ambulance with the EMTs, the ambulance was called to an emergency. The EMTs told him to drive to the location as it was important. So he got a chance to join a real emergency response. “They just told me, stay to the left and everyone will move”, he said as he recalled the story.

Edd is originally from Birmingham, Alabama. There he met his wife, Shree, and they have been married since he was 19. Together they decided to move to Madison in 1986. While in Madison he started working at a corn canning plant. He then moved to work at Woodman’s, and later joined the City by working as custodial staff for the Civic Center. It wasn’t until April 1988 that he joined Fleet. His career in Fleet started as a garage attendant, where his main responsibility was washing vehicles. He moved up the ladder and became a mechanic. Now he has 5 children and 5 grandchildren.

With over 31 years working for Fleet, he has seen many people come and go, yet he still enjoys working here. Edd is a great asset, and we’re happy to have him as part of our team and recognize him for Black History Month.

This content is free for use with credit to the City of Madison - Fleet Service and a link back to the original post.
Category: Our Team
Tags: Employee Profile, Team Fleet, #TeamCity, Black History Month