These geographic areas were determined by looking for areas of overlap across multiple sources, primarily the USDA indicators of low access and low income census tracts. This refers to the combination of high average distance to a grocery store with high rates of poverty by census tract. Low access to food outlets can also occur when physical barriers to a nearby outlet exist. This can be a man-made barrier, such as a road, or a natural barrier, such as a body of water. The USDA information can be viewed at the following website: http://healthyfoodaccess.org/get-started/research-your-community.This map (see below), specific to the City of Madison, overlaid American Community Survey data on a vehicle ownership, locations of existing retail outlets, and City of Madison Neighborhood Resource Team locations to refine or expand certain areas of focus.

Neighborhood Resource Teams (NRTs) are comprised of City staff who serve specified neighborhoods with a population range of 500-2,000. NRTs focus on an agenda created by the community which can range from better lighting and housing to youth recreation and transportation matters. In addition, the NRTs engage other government agencies and non-profits in an effort to ensure that services are delivered in a comprehensive manner covering transportation, health, housing, quality childcare, and education and job training. The mission of the Neighborhood Resources Teams is to encourage and enhance communication, coordination, and relationship-building among City staff, City departments, residents, and other stakeholders to promote equity and improve the quality of life for all residents of Madison's neighborhoods.

Census tracts tend to be too large in Dane County to accurately reflect neighborhood-level variation, so a qualitative assessment was done to exclude areas of affluence, green spaces, and industrial areas. This map is also a living document; it is not static. As new outlets arrive to neighborhoods, and others leave, areas will see improvements and decline in access to food and the map will be adjusted accordingly. To this end, there are now 3 versions of the Food Access Improvement map -- the original map, which was created and approved in the summer of 2015, the first update to the map, which was approved in January 2018, and now the 3rd version of the map - updated in December 2022.

It is important to note that this is not a map of food security. Food security is defined as the ability to obtain an adequately nutritious meal for all members of a household for each meal of the day. Food insecurity, or the lack of that consistent access, is a symptom of poverty. As such, the issue of food insecurity is extremely complex and requires a multifaceted approach to address underlying issues of poverty, such as housing, job access, education, transportation, and food access.

One strategy of the City of Madison to reduce food insecurity is to focus investment relating to food retail in areas that share factors of low income, poor access, low vehicle access, and others to concentrate on the areas of greatest need. By focusing on these geographical areas, the dollars invested have the opportunity to make the greatest impact and will assist the City in developing strategic plans and setting priority in food access investments. 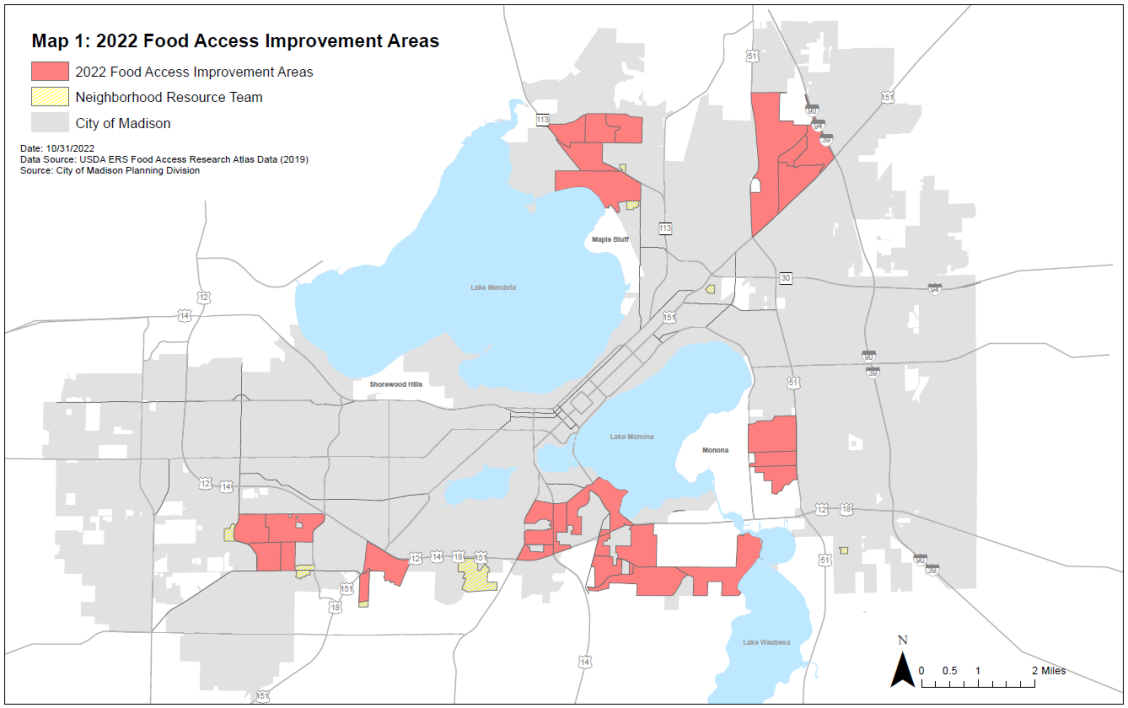