This Spring boaters may notice the boat launch at Olin Park has an improved look and feel.  During this past winter Parks staff worked to repair and replace the launch getting it ready for the busy summer season. 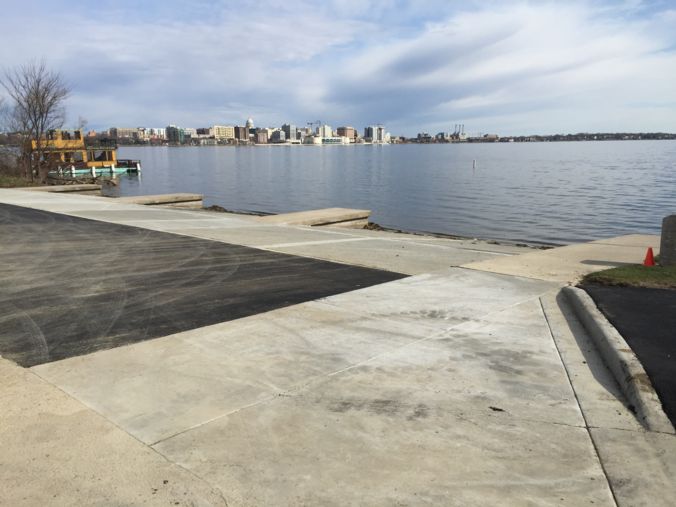 The launch has served Lake Monona boaters since its original construction in 1985. The launch in its current location was actually relocated from Wingra Creek as part of the 1985 project so that larger boats could be launched and avoid the shallow silty bottom of Wingra Creek.  This 1985 project was funded jointly through City of Madison Parks Division and the Wisconsin Department of Natural Resources.   The original boat launch in Wingra Creek remains to this day but is designated as a canoe and kayak launch.

Over time, the 1985 concrete ramps started showing signs of deterioration and had developed cracks and holes that were making it difficult for users to launch boats.  In addition, a scour hole had developed off the end of the concrete ramps in the lake bed.  Scour holes are formed when boaters "power load" their boats onto trailers and the jet of water emitted by the boat motor displaces lake-bottom sediment.  If this scour hole gets deep enough, trailers that are backed off the end of the concrete ramp can fall into the hole and which makes it difficult to remove.  Boat trailers at the old launch were also scraping the pavement due to an abrupt change in grade on the launching ramps, roughly over a 10% discrepancy.

So, we knew improvements were necessary and that the project was bigger than just replacing the existing boat launch. Parks designers and staff aimed to improve the design, as well as the function of the launch. Through a bidding process, the City hired Janke General Contractors to do the launch construction. Janke had recent experience in Dane County constructing the Lower Yahara Bike Trail from Madison to McFarland and were experts in boat launch construction. 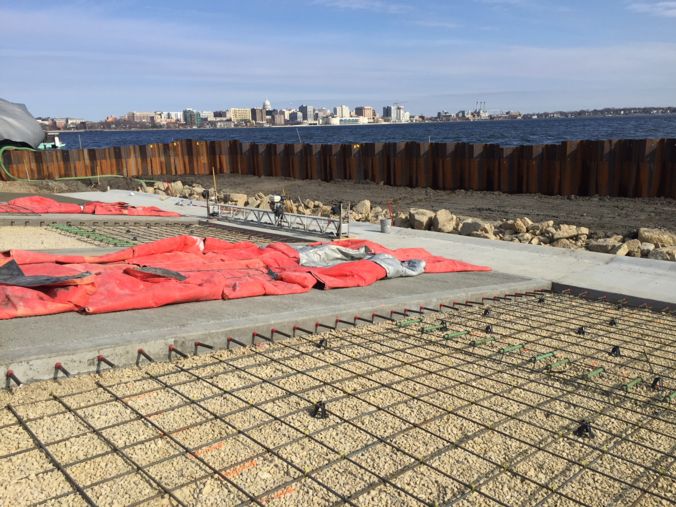 Janke elected to place tight sheeting in Lake Monona, as soon as the lake thawed in March and pump the site dry of water to carry out the work. This allowed the site to be totally contained within the sheeting without any sediment escaping into the lake. After the old concrete ramps were removed, new forms were installed on the now dry lake bottom. The new concrete was poured, rip rap was placed, and special V shaped traction grooves were tooled into the concrete surface.

The concrete ramps were rebuilt using high strength concrete and heavy duty steel reinforcing bars.  These steel dowel bars are similar to what is used in highway construction to keep concrete slabs from settling or separating.  Additionally, 3' deep footings were poured at the edges of all the ramps to further combat movement. The launch grade was revised to about 6%, to lessen to the break vehicles and trailers encounter when they back down the ramps.

A new approach was pioneered at this launch to combat the scouring of the lake bed.  Several steps were taken to repair the damage caused by past power loading and mitigate any future damage.  Steps included:

This new dip and lip design serves two functions.  First a shallow trough is created for trailer wheels to settle into before they go off the back of the ramp. This serves as a warning to users that they have reached the end of the ramp.  Secondly a small riser bump is poured at the end of the ramp.  This lip serves to further prevent wheels from going over the back of the concrete and then most importantly deflects the water jet from boat motors upwards away from the lake bottom. The progress of the scour hole will be monitored in coming years and if successful it will be used at other sites and may help the City avoid costly and damaging dredging projects at other boat launch sites. 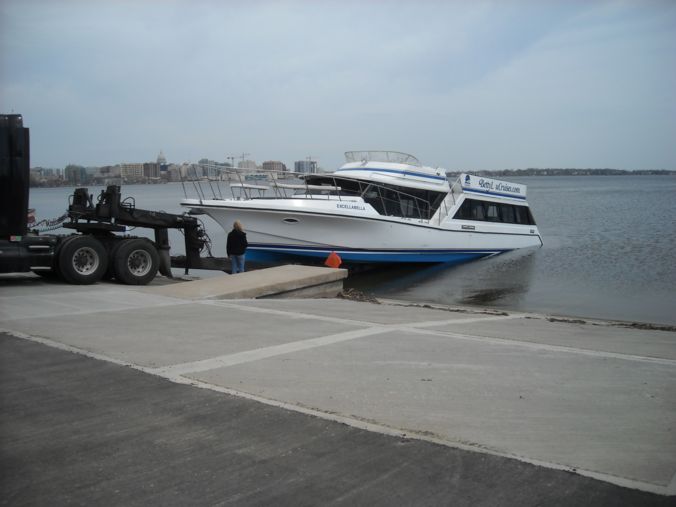 This project was completed on-budget and slightly ahead of schedule, just in time for the opening fishing weekend on Friday, May 4. Work like this is never done alone. It takes a team. In particular, I'd like to thank the following for their guidance, assistance, and expertise in bringing this project to fruition: Wendy Peich from the Wisconsin DNR, Janke General Contractors, and Eric Hoel and Sally Swenson from the City's Engineering Division.