The Madison Metropolitan Sewerage District (MMSD) has been planning for and working on their Northeast Interceptor - Truax Extension Relief project for a number of years.  The project will increase capacity and boost the resiliency of the district's wastewater collection system.  MMSD involved the community in the project during their process.  As a part of that involvement, multiple options for possible routes were contemplated.  After the public engagement work in May 2018, MMSD approached the Parks Division requesting consideration of the placement of the sewer line through Reindahl Park, which was one of four alternatives presented to the public.  This request from MMSD was placed on the June 13, 2018 Board of Park Commissioners (BPC) agenda (File #52011, Agenda #15).   The Proposed Route presented to the BPC showed the routing through the park's western edge, bending eastward and then to the southeast through the small more wooded area of the park north of Wendy's and under East Washington Ave through the "triangle" portion of the park property.  The plan also showed pathway connections built as a part of the project.  The pathways added are consistent with the Adopted Master Plan for Reindahl Park.   The BPC discussed and debated the matter and asked questions of MMSD and Parks staff.  The BPC subsequently voted unanimously to approve MMSD moving forward with further design efforts along this routing.

After the initial approval, parks staff worked with MMSD to develop a routing that was consistent with the tentatively approved route.  Key considerations of the routing were to protect specimen trees (especially the old-growth oaks), provide a path system that was a valuable asset to the park, and to avoid placing the line further into the park than necessary.  Placing the pipe through the middle of the park, or even more in the middle of the park, creates a significantly higher long-term risk of conflicts when issues around the pipe occur.  Additionally, given the no-build nature of the permanent easement, I found it important to limit future conflicts that could occur with facilities needed to meet the future community needs in the park.  This includes potential long-term grade-separated access across or under E. Washington Ave.

After the design work was completed, MMSD worked with City staff to develop the real estate documents for the Permanent Limited Easement for the project.  The authorizing resolution (RES-19-00353 - Leg#54917) was introduced at the Common Council on March 5, 2019.  This resolution was subsequently approved by the Plan Commission, Finance Committee, Board of Public Works, Board of Park Commissioners, and finally was adopted by the Common Council on April 30, 2019.   These documents also created the commitment for restoration efforts in the park that include tree replanting, as well as native landscape improvements in the park. 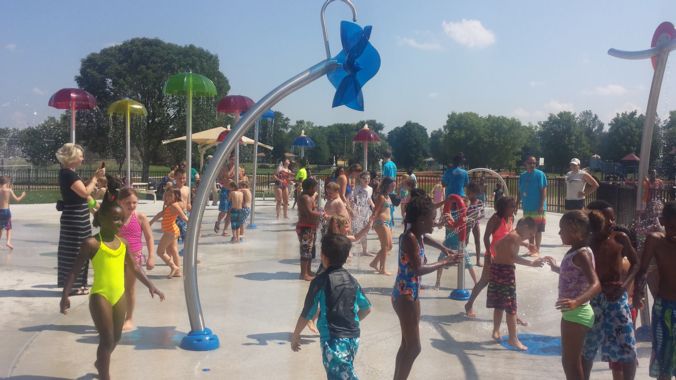 The final design includes a routing that provides protection for the high-value oaks in the park, promotes walkability and connectivity with the path system, and will provide significant landscape improvements that will allow for better-restored native understory forbs and grasses to be planted to promote biodiversity and habitat.  The current plan includes the removal of 49 trees on park property or adjoining terraces, and includes the removal of 39 trees in the more wooded area of the park north of Wendy's.  Of the 39 trees in the more wooded area, 30 are basswood, 8 are hickory and 1 is a juniper.   It is certainly unfortunate to lose trees from our system, but it is important to note that the majority of the trees are basswoods in an area that was historically an oak savannah or woodlot.  The majority of basswoods are a native species, but they grow quickly creating a shadier environment that, along with invasives like buckthorn, make it difficult for young oaks and native groundcover to thrive.  The project at Reindahl, though requiring tree removal, provides an opportunity to promote a more diverse and sustainable landscape that can be enjoyed by all in a highly valued community park.  Though the disturbance through the park is significant, staff are focusing on the opportunity to replant diverse tree species throughout the park (with a focus on appropriate species in the savannah remnant) and to plant native forbs and grasses to promote habitat for pollinators and wildlife along the sewer easement.

MMSD has notified Parks that they would like to move forward with the necessary tree removals to begin work on the boring operation under East Washington.  This work requires large equipment to be on site and the creation of bore pits to effectuate the work under E. Washington. I have informed them that based upon their timeline and plans provided to us, I am approving their access into the park north of E. Washington to move forward with construction within their Temporary Limited Easement, including the approved tree removals.  Staff will monitor the construction and MMSD is aware of and committed to the requirements around tree protection.  Their work in the near term will be focused on the southern edge of the park and should have minimal impact on park users.