With a Little Help from Our Friends the Flea Beetles

For anyone, starting a new job can be exciting and maybe a bit stressful. For Laurel Franklin, her new role in Madison Parks offers her a place to shine and put her years of experience to work. As Madison Parks newest Land Stewardship Technician and the first woman in the role, Laurel manages the many meadows and "no mow" areas in the East parks section. The goal of this position is to transition these areas to healthy, diverse prairies flourishing with native perennial wildflowers and grasses providing an ideal setting for pollinators.

Early in her new position, she found a "small patch" of leafy spurge in Warner Park. The small patch turned out to be more than 4 acres of this perennial invasive, with massive roots often more than 15 feet deep, and known to choke out the good, native plants. She knew something had to be done.

"I am always seeking ways to improve park lands," Laurel explained, "using methods developed in our Land Management Plan, and finding ways to control invasive plants without the use of chemicals." 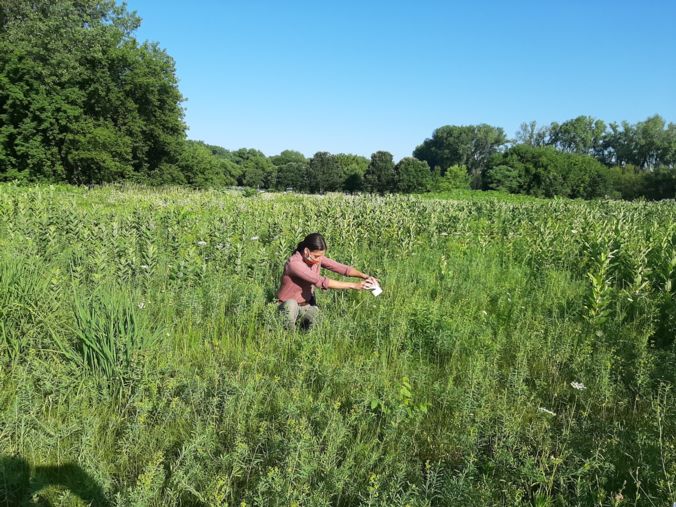 Through her connections and research, she learned of a biocontrol method that suppresses the leafy spurge. The flea beetle, which is not actually a flea, consumes the foliage of the leafy spurge as an adult and feeds on the roots as larvae. Biocontrol refers to the use of living organisms such as insects (or goats) to control a weed infestation and requires both a state and federal permit. With this new information, Laurel detailed the long-term benefits and provided a cost and benefit analysis to her supervisor for approval.

Kristin Mathews, East Parks Supervisor said, "I have been thoroughly impressed with Laurel's ability to think outside the box and explore different land management techniques."

Through Laurel's research, she connected with Kevin Luepke of the Fort McCoy Natural Resources Branch. After receiving approval from not only Parks supervisors, but also securing the necessary permits, Laurel planned a visit to Fort McCoy. There, Laurel met with Luepke and his team and began net sweeping the fields, catching all sorts of insects and critters. 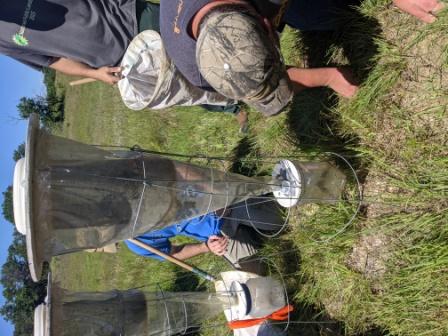 Using an "insect sorter" created by staff at Fort McCoy, the cone-shaped sorter separates insects by size, leaving just the tiniest critters, in this case ants and flea beetles, in the bottom container, and ready for transport. In this field trip, about 5,000 beetles were yielded and then stored in coolers for their journey to their new home in Madison. Keeping them cooled overnight, the beetles were released the following day at Warner Park, and in a newly discovered area in Meadow Ridge Conservation Park. 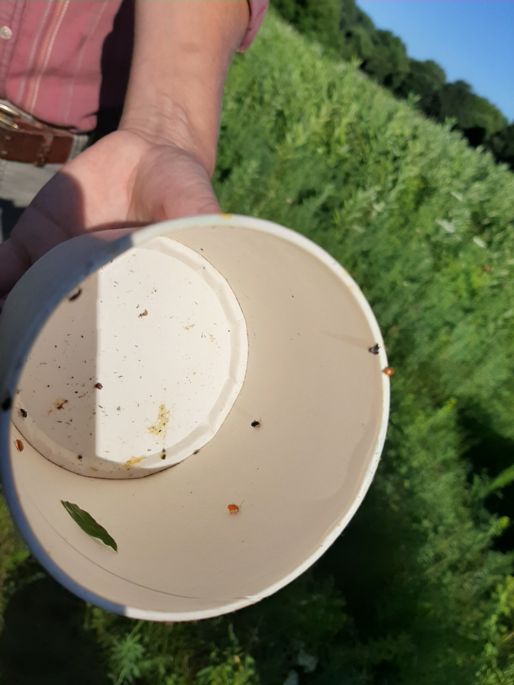 While the larva are still underground, a prescribed burn is planned for April 2021. This exposed soil will help the flea beetle during hibernation, where it will then pupate and emerge as an adult laying eggs through mid-August. The flea beetles are expected to continue to do their work for several years and naturally decrease in population as their food source decreases.

Prescribed burns are planned to continue over the next several years to assist with the work of the flea beetles. Parks staff will continue to monitor these fields and document the anticipated positive results. If all goes as planned, one of the goals is to use Warner Park as a flea beetle collection site for other areas such as conservation and City Engineering.  You can look for future progress updates on this innovated technique.

This content is free for use with credit to Madison Parks and a link back to the original post.