Last month, the Draft Environmental Impact Statement (EIS) for the F-35A Operational Beddown Air National Guard was released. I shared initial information at that time and followed up with more details two weeks ago. Since that time, I've continued to work on understanding the impact that the proposed beddown of F-35A jets at Truax Field is expected to have on nearby residents and on the greater Madison region.

After considerable review of the full EIS, the 115FW Noise Analysis, and the Appendix on Noise Modeling, Methodology, and Effects; additional research into Part 150--Airport Noise Compatibility Planning, National Environmental Policy Act (NEPA), and Executive Order 12898 (Federal Actions To Address Environmental Justice in Minority Populations and Low-Income Populations); and following a tour of the 115th Fighter Wing led by command staff and conversations with residents living inside and outside of the 65 dB contour; it's clear to me that the proposed action is likely to cause significant negative impact to our community.

Based on that determination, I have introduced a resolution for debate and action at the September 17th Common Council meeting: Responding to the Draft Environmental Impact Statement (EIS) for the Air National Guard F-35A Operational Beddown. I'm working to finalize the language of this resolution and will share it once complete. This meeting will provide a good opportunity for concerned residents to share their thoughts on the proposal with the mayor and common council.

In addition, I am cohosting a community meeting on Wednesday of this week along with Alders Abbas and Rummel to share information and to try and answer questions about the proposed action and public process (details below). This community meeting is in addition to the official Public Open House that is sponsored by the National Guard Bureau on Thursday, September 12th, from 5-8 pm at the Exhibition Hall at the Alliant Energy Center.

I'm thankful for those that have already reached out to me on this issue and encourage anyone that would like their opinions considered to attend Wednesday's Community Meeting (9/11), Thursday's Open House (9/12), and next Tuesday's Common Council Meeting (9/17). Written comments can also be submitted directly to the National Guard Bureau here prior to September 27th for official consideration. 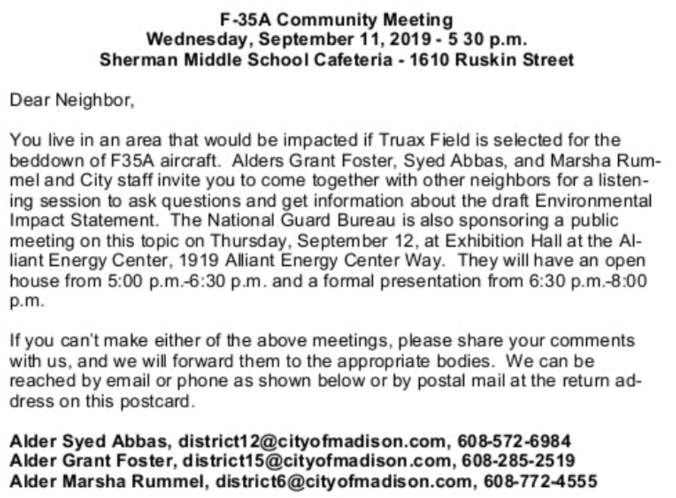