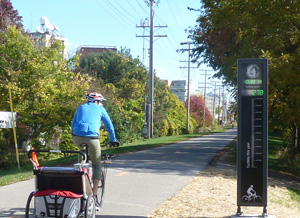 City of Madison Traffic Engineering is pleased to present data from the City's two automated visual bike counters. One bike counter is located on the south side of the Southwest Path, just Northeast of the intersection of Regent and Monroe Streets. The second counter is located on the Capital City Path along John Nolen Drive just east of the intersection with the Brittingham Park Path. Both counters display the number of daily bicyclists and annual bicyclists who pass it.

These counters are not the only bicycle counters in the City, in fact the City has tracked bicycle usage for many years, rather these are the first bicycle counters that display the number of riders to both passing path users and motorists on the nearby streets. It is one of many bike infrastructure improvements that continue to make Madison more bike-friendly. While the Counter provides real-time ridership information, it also serves as a welcoming gateway sign and bicyclists can see that they're part of a larger cycling community. 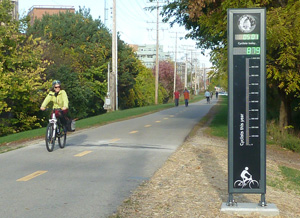 The Counter was manufactured by Eco Counter. Eco Counter is an international company that specializes in pedestrian and bike counting systems.

You can view date at the Visio Eco counter. Data is updated once per day.