Here are more updates to keep you posted.

We are in the midst of a national reckoning on race, and part of that discussion is centered on reimagining public safety.

The PSRC subcommittee is holding a public hearing seeking community input on the police department budget this Thursday, September 24, at 6 PM.  For more information, click here.

The planning process for Law Park has now entered a second phase. Parks Dept has expanded the study area to include the John Nolen Causeway all the way to the north end of Olin Park. This was done partly to coordinate with the planned redesign and reconstruction of John Nolen scheduled for 2024-2025, and partly because of the historic vision John Nolen and other visionaries had for the dynamic possibilities along the Monona shoreline.

The entire study area is now being called The Monona Causeway. The city is seeking input from the community, the plan being "to engage a diverse range of community members in order to identify desired improvements, and generate ideas to create a more enjoyable, welcoming, and accessible Monona Waterfront."

A virtual neighborhood workshop is scheduled for October 29th. If you are interested in participating in this community focus group, please email me at district13@cityofmadison.com.

Last evening at Finance Committee, Planning and Economic Development Director Matt Wachter led a discussion about affordable housing strategy options for the city. In brief, the primary approach to date has been to use the City's Affordable Housing Fund to leverage 9% WHEDA tax credits to subsidize units, allowing us to provide housing for those who earn 30-60% Average Median Income (AMI). Due to economic gains for those in higher income brackets, the AMI has increased to the point where lower income families struggle to afford to live in Madison.  The 9% tax credits allow for more subsidy, but the process by which these tax credits are awarded is extremely competitive and not easy to access.  Mr. Wachter is asking Alders for recommendations as to how we should move forward.

Racial disparities in income and wealth have persisted over decades, and it's increasingly challenging for African-Americans to find a place to live in Madison.  Below is a chart showing how this has changed from 2010 to 2018. 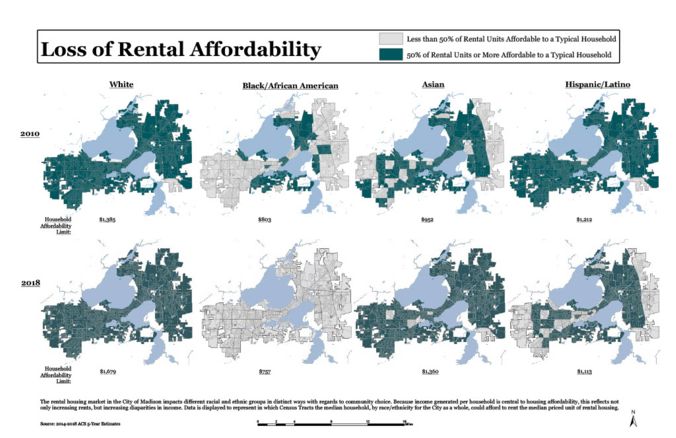 A similar chart from 2010 to 2016 showed only a handful of census tracts available for the typical Black household. This chart shows they've evaporated altogether.  This speaks to what some have called the suburbanization of poverty, by which lower-income folks are displaced to Middleton, Sun Prairie, Fitchburg, DeForest, etc. Lacking robust transit options to these municipalities, increased traffic congestion and carbon emmissions ensue.

But the bigger issue is our already historically segregated City is becoming an even less welcoming place for people of color.

Aware of these challenges, the Community Development Authority is having a Retreat Session this Thursday to examine its Mission, Vision, Values, and Strategy. I serve on the CDA Board, and one of the topics we are discussing is how CDA can retool itself to become a more aggressive Housing Authority, issuing bonds to purchase land and construct new housing projects to meet the demand. CDA has been primarily focused in recent years on maintaining its existing properties, many of which are seriously dated and need constant attention. Plans are afoot to rebuild the CDA Housing in the Triange, for example, but we need to build new housing, not just replace the old.

During my campaign to become your Alder, I promised I would focus on the redevelopment of Bayview and the CDA Housing in the Triangle. And I promised to do my very best to shepherd a positive outcome for Truman Olson so that we can preserve grocery access for South Madison. These remain top priorities. We MUST continue to view challenges with the dual lens of equity and sustainability, advancing pragmatic policy solutions.

I will keep you posted on this very important topic and welcome your input.

The deadline for completion of the 2020 Census count remains uncertain as a federal judge's temporary restraining order directs the bureau to pause plans to complete the count by September 30. The Trump administration had extended the deadline to October 31 in April, then rescinded the extension in July. A group led by the National Urban League challenged the Trump administration to allow the Census Bureau time to complete the count fairly and honor the October 31 deadline. A court decision was expected on September 17 but was delayed when Justice Department attorneys failed to provide requested documents.

Because of changing dates, political interference, and misinformation many Madison residents may not be counted. Community leaders, nonprofits, and Census staff are working frantically to reach as many Madison residents as possible, especially in parts of the Northside, south of Wingra Creek/Lake Monona, and in the Allied Drive area, where household self-response rates are below the city average.

The final Truman Olson neighborhood meeting is scheduled for Wednesday September 30, 6:30 pm. Check the Truman Olson website for the Zoom link.  Postcards were sent out with a typo showing the date as Thursday, September 30. Again, the correct date is Wed Sept 30.

In closing, these are trying times.

I continue to be impressed by your resilience. Volunteers in the D13 Mask Brigade continue to drop off their wares on my front porch.  The District 13 Neighborhood Alliance members continue to look for ways to serve. Folks organize when racist flyers appear. An anti-racism committee crafts a pamphlet called When to Call 911. Neighbors reach out to a homeless family camping in one of our parks, offering a helping hand until outreach workers can get there with a more lasting solution.

This is how we get through this. Together.