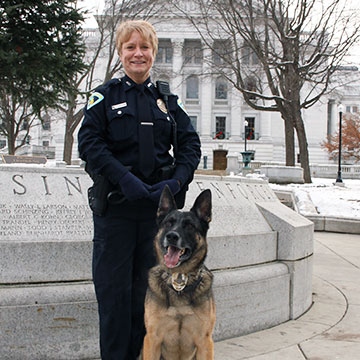 Police Officer Carren Corcoran has been a Madison Police Officer since May of 1990. Some of the positions she has held within the Department include: Patrol Officer, Allied Neighborhood Officer, Field Training Officer, Dane County Narcotics and Gang Task Force, and Community Policing Team Officer.

She had worked Human Remains Detection dogs for 10 years and saw firsthand the incredible potential of a dog's nose in assisting Law Enforcement and attributes the fact as to why she was interested in the K9 Unit.

Officer Corcoran began her assignment on January 30, 2010 when she was partnered with K9 Slim. They completed a four week handler course at Tarheel Kennels in Sanford, North Carolina.

K9 Slim is named in honor of Lori Rappe, who passed away in February of 2010. Lori was one of the original board members for Capital K9, the nonprofit organization that raises funds to support the MPD K9 Unit. Slim was her childhood nickname and the name of her first dog.

Her favorite part of being a K9 handler is when K9 Slim can provide some information to an investigation. She states "Slim loves tracking, so I love tracking. When he gets out of the squad at a call he immediately jumps up on the trunk to see if his harness is there- if it is, he bites it and begins to carry it around".