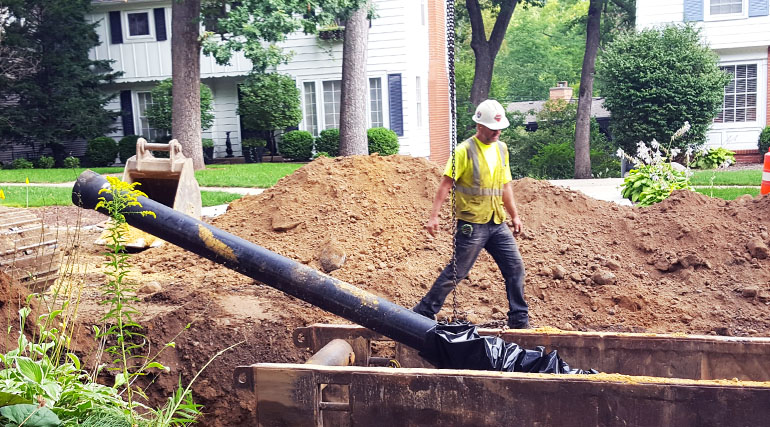 Photo: Water main is lowered into place beneath Yuma Drive.

“We’re on call 24 hours a day, 365 days a year to fix breaks and get the water back on for customers as quickly as possible,” says Greg Kolek, who has overseen water main repairs in neighborhoods all across the city during his 15 years with Madison Water Utility.

But how many breaks are too many? Madison has about 870 miles of water main under its streets, and nearly half of those pipes are at least 60 years old. Some have been underground for more than a century.

"We could always repair – more workers, more equipment. We could always say, 'Three or four hundred breaks a year is okay. We're just going to live with it,’” says Madison Water Utility principal engineer Al Larson. "But people are not going to want to see their street dug up every year and disrupted service. People just get to that tipping point and they say, 'No more. We've got to do something.'" 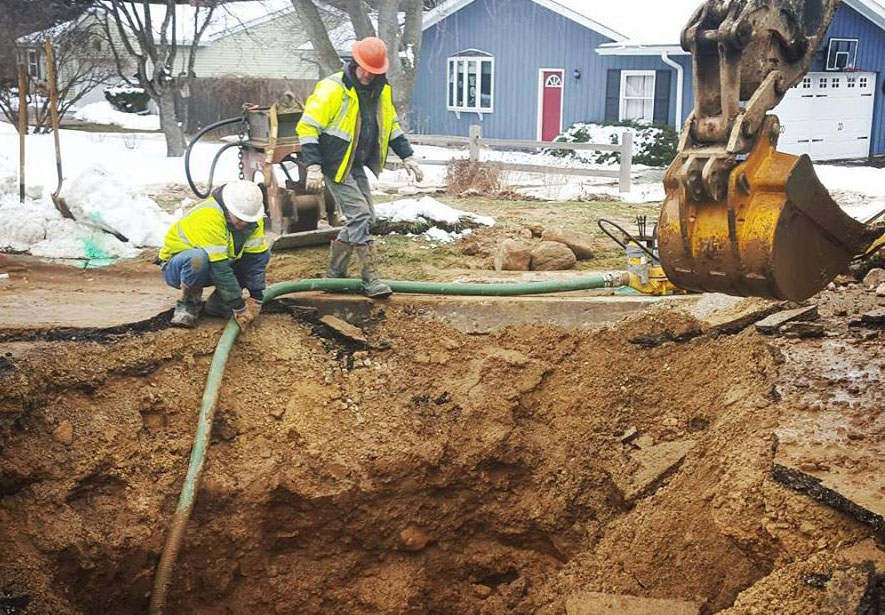 According to Larson, prior to 2005, Madison Water Utility wasn’t doing nearly enough to care for its aging infrastructure. Back then, the utility typically replaced between a mile and a mile-and-a-half of main a year.

“We didn’t have a plan for infrastructure replacement. We should be replacing at least one percent of our water mains every year. We were doing two-tenths of a percent. It doesn’t take a lot of research to understand that we were falling behind.”

A study commissioned by the utility in 2004 showed that nearly half of the city’s water mains needed to be replaced – about 400 miles of underground pipe. The utility would have to implement a long-range 40 year plan and start replacing nine to twelve miles a year, at a cost of about $1 million a mile, just to catch up.

“We said at the time, ‘There’s no way. We can’t go from one-and-a-half miles to nine miles year,’” Larson recalls. “So our goal was to ramp up slowly over the next 15 years to get to where we needed to be. In 2005, we started our Water Main Replacement Program and started focusing on replacements, and we did three miles the next year."

This month, the city will hit a major milestone – 100 miles of main replaced since Madison Water Utility began its Water Main Replacement Program twelve years ago.

“In 2005 I couldn’t fathom being at a hundred miles. I thought that was like climbing Mount Everest,” Larson laughs. “We’ve made great strides toward our goal of replacing 400 miles of the worst pipe.”

But all that infrastructure replacement comes with a cost. In 2005, the utility spent about $1.5 million a year rebuilding mains. In 2017, it will spend $8.5 million to replace or rehabilitate 8.8 miles of pipe. 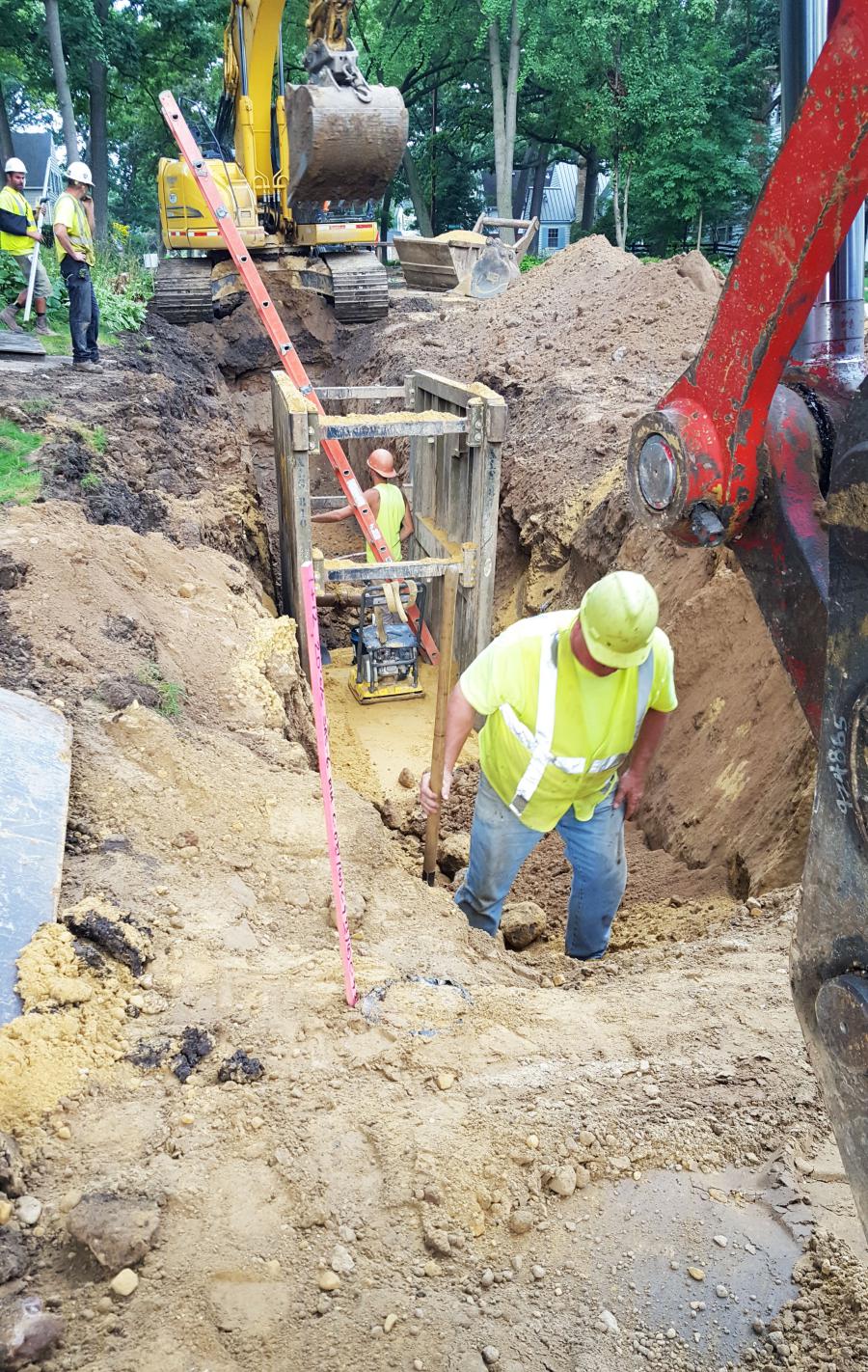 The impact of that rising expense and other major water infrastructure programs on customer bills has been hard to miss. In 2005, the average residential customer paid about $10 a month for water and fire protection. Today, it’s nearly $20. (Water charges make up about a third of the total Madison Municipal Services Bill.)

“I don’t remember getting a lot of complaints about the cost of water back in 2005. I definitely have those kinds of conversations now,” says Pam Mousley, who heads up the billing department for Madison Water Utility. “People think we are a for-profit business, but we’re not. We’re just trying to cover the expense of caring for the public water system.”

And those expenses won’t be going away. The city still has three hundred miles of main and another 30 years to go to meet its original goal.

“We have to catch up because the city expanded and grew quite fast in the middle of the last century, and a lot of water infrastructure was built in a short amount of time,” explains MWU general manager Tom Heikkinen. “Now it’s reaching the end of its useful life. You have to match your effort with that environment.”

Heikkinen says it's the utility's job to keep Madison's water infrastructure in the very best shape possible, because the alternative is unacceptable.

“Every so often we get severe winters, and in those years we might be really struggling to keep up with main breaks. People would be out of water, perhaps even more than a day in some situations, if we didn’t keep on top of our main replacements.”

Instead, Madison Water Utility is focused on replacement and renewal rather than simply responding to break after break. And these days, what once seemed like a long climb just to keep up, is a routine part of utility planning and work.

“We’ve got staff to do the design work, we’ve got construction staff. It’s become an expectation. It’s just part of what we do,” Larson says. “You want to leave the world a better place than how you found it. Somebody provided the water main that goes by my house, and it’s up to me to make sure that when I’m gone, someone else will provide the same standard of living that I get now – having good, clean, safe drinking water."

Madison Water Utility's 100th mile of main is being installed during a street replacement project on Yuma Dr. on Madison's west side. The utility will hold a small celebration with neighbors and employees on Thursday, Sept. 14th at 10 a.m. The event will include coffee and "water main" cake. Attendees will be able to sign a 504 lb. section of ductile iron pipe and watch as it's lowered into place six feet below street level. Once the project is complete, the utility expects the new water main to remain in service for 100 years.

This content is free for use with credit to the City of Madison - Madison Water Utility and a link back to the original post.
Category: Sustainability
Tags: water, Infrastructure, Water Main, Public Works, Clean Water, Fire protection