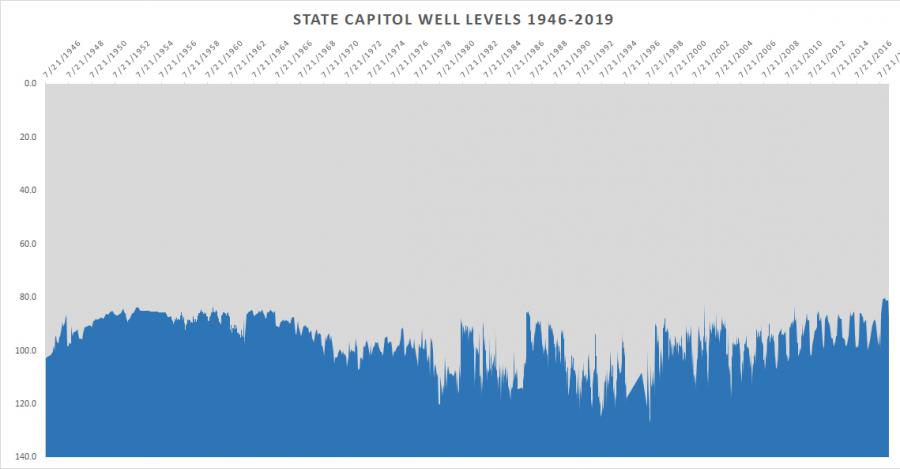 The last five years may not seem all that unusual when it comes to water use – we still take showers, flush toilets, water our gardens, maybe pull out the Slip n’ Slide on a hot summer day. But groundwater levels below the city tell a different story.

“There’s been a big change from where we were even just a decade or two ago,” says Madison Water Utility water supply manager Joe DeMorett. “It’s very important.”

For more than 70 years, the United States Geological Survey (USGS) has been periodically lowering a metal tape down the bore hole of an old hand-pump well in the state Capitol basement, taking regular measurements of water levels in the aquifer system below.

“Underneath the city, there are two different aquifers,” DeMorett explains. “And at this particular point, the two aquifers are joined. They’re connected. The well is open in the upper aquifer and the lower aquifer, so basically it represents the water level beneath the city.”

According to USGS data dating back to 1946, the most recent five-year stretch from 2014 to 2019 brought the highest average water levels in this part of Madison’s aquifer system than any five-year period since 1965 to 1970.

It’s been nearly 50 years since the depth to reach water in the aquifer below the state Capitol has been consistently less than 100 feet. In the 1990s, that metal measuring tape had to be lowered 120 feet below ground to hit water. In 1998, the aquifer hit a record low point, with water levels 130.7 feet below the surface.

“For many years, the aquifer level was going down, and we were pumping more and more. Now that we’re pumping less, we’re seeing a change in the aquifer. And of course we had some wet seasons too, which help,” DeMorett points out.

Several wet summers in a row mean people are watering their lawns and gardens less, but it also means more water is seeping into the ground, recharging the aquifer. 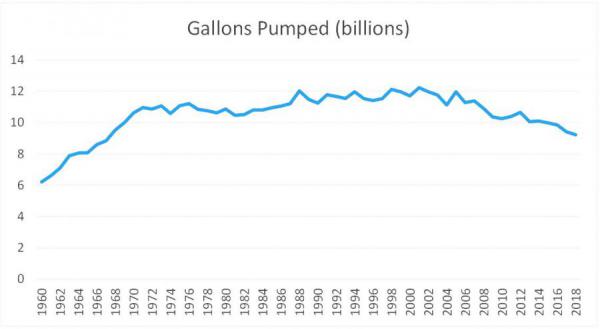 “We don’t want to take more out of the aquifer than that what’s going in,” DeMorett says, pointing out that the deeper the utility has to go to reach water, the more energy-intensive it is to pump it out.

“Each gallon weighs 8.33 pounds. So when you’re pumping two thousand gallons a minute at a well, that’s about 8 tons of water every single minute,” he says. “That’s a lot of weight to be pumping. It’s a lot of electricity. When we pump less, we actually use less energy, so our carbon footprint shrinks.”

DeMorett points to a number of factors for the decline in water use in Madison – wetter summers, far more efficient toilets and appliances, and fewer industries operating in the city.

“We used to have all these dairies, which were big water users. And more manufacturing. A lot of that has gone away.”

When Madison’s Oscar Mayer plant closed its doors in 2017, the impact was immediate. The plant typically used 400 million gallons of water a year when it was at full production.

Another big change happened at Madison Water Utility itself.

"We've changed the way we pump water. We’re trying to pump more wells, but at a slower rate. That spreads out the draw-down so you’re not creating really low points in certain parts of the aquifer.”

Barring the occasional dry summer or drought, DeMorett expects rebounds in the aquifer to continue

“We can’t go back to the way we used to be. We need to be sustainable. As the population grows, at some point (levels) are probably going to start going back down. Verona, Fitchburg, Monona – they use the same aquifer. So its health depends on all of us acting in a sustainable way.”

This content is free for use with credit to the City of Madison - Madison Water Utility and a link back to the original post.
Category: Sustainability
Tags: aquifer, Sustainability, capitol, pumping