Initiative aims to keep pharmaceuticals out of our wastewater and landfills 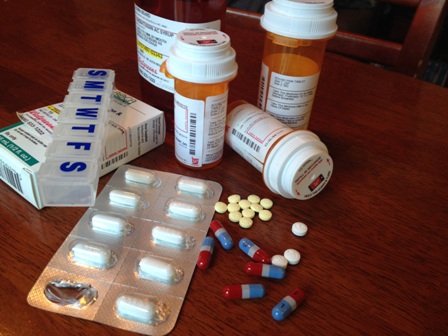 It's an alarming thought – prescription drugs like anti-depressants, hormones, painkillers, antibiotics, and steroids showing up in the water supply. But it's happening in cities across the country, especially those that get their water from lakes and rivers.

"Most of the biggest cities get their water from surface water, so in big cities, this is an emerging problem," says Madison Water Utility water quality manager Joe Grande, who points out that many pharmaceuticals end up in lakes and rivers because they've been flushed down toilets. "Surface water suppliers are often getting water downstream of waste water effluent."

Madison gets its water from an underground aquifer, so pharmaceutical contamination isn't likely to be a problem – recent testing showed no trace of pharmaceuticals in Madison's drinking water. at least not yet. Still, Grande stresses that anything tossed in the trash, whether it be old drugs or cleaning solvents, could eventually make its way to our groundwater.

"If you throw it in the trash, it goes into the landfill, and then there's that potential," Grande says.

Take Back Initiative, May 16

"It doesn't matter what the medication is, it's not going to be okay to flush it or throw it away," says Eric Hewitt, owner and pharmacist at the Medicine Shoppe in Monona.

Twice a year, Hewitt participates in the Drug Enforcement Administration's National Take Back Initiative. For one day only – May 16 from 9 a.m. to 1 p.m. – people can drop by the Medicine Shoppe at 4205 Monona Dr. to safely dispose of any type of medication.

Hewitt expects customers from Madison and Monona to drop off enough medication to fill three or four boxes with nothing but pills – just about every kind of pill imaginable.

"Anything from pain meds...to blood pressure medicine. It really runs the gamut."

Hewitt may be a pharmacist, but he's also got a deep appreciation for clean water. Maybe that's because his dad, John, is a long-time Madison Water Utility employee.

"(The utility does) a great job keeping a clean water supply, and we just want to partner and help with that," he says, adding that even though the program has grown every year, there's still a long way to go. "My hope is that it becomes kind of a standard of practice. It used to be, 'Okay, I'll just throw them in the garbage or I'll just flush them down the toilet.' This program helps create an awareness about the water supply.'"