Frozen on the inside: Indoor flooding season is here 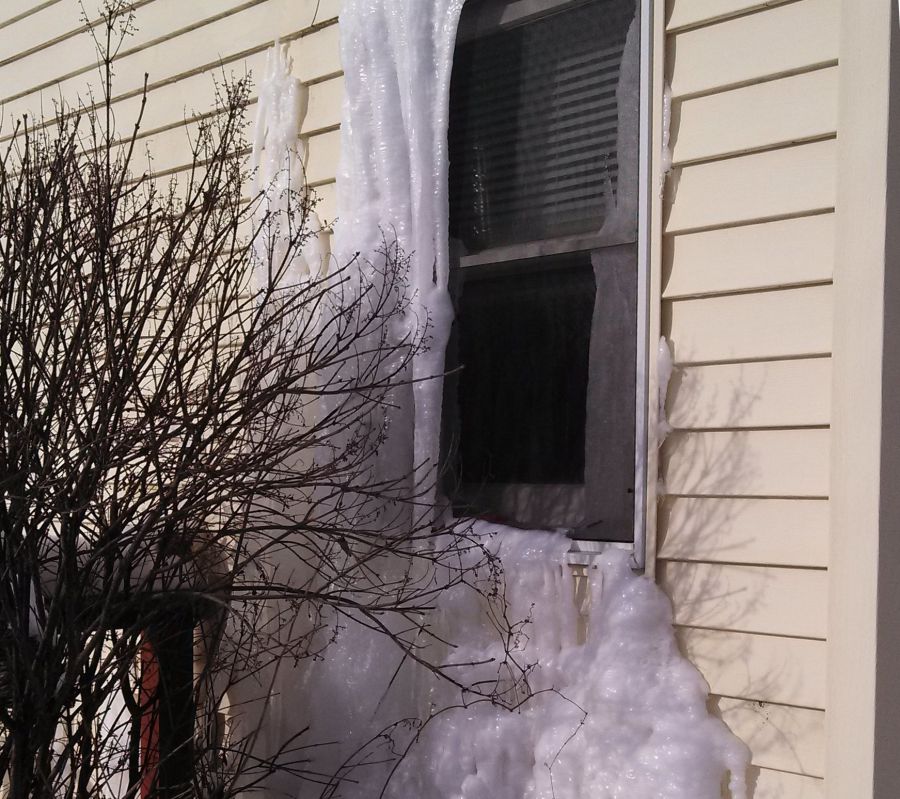 (Photo: Ice dam forms where water has been seeping out of a home's window)

They're known among Madison Water Utility inspectors simply as "flooded houses" – homes with collapsed ceilings and peeling drywall, water pouring out from under doors, thick ice on the insides of windows. Water Utility service inspector Mark Ertel recalls a case one winter that started with a call about a water main break.

"The callers had pulled out of the driveway one morning and saw all this water in their street," he recounts.

Crews responded, but what they found wasn't a main break. It was a nearby home that had exploded with water, all because of frozen, burst pipes inside.

"They saw this big ice wall coming from the first and second floor. Water had just come up so high that it finally burst out the siding. They had an ice dam all the way down the side of the house."

Ertel estimates that thousands of gallons had poured from the vacant home before anyone noticed.

"It was probably three feet thick and five feet wide. It was one of those things like, 'Wow, this is incredible. I can't believe how much water is in this house!'"

As temperatures drop in Madison, flooded house season begins. Often, the homes are in foreclosure, owned by banks far outside of Wisconsin.

"When the foreclosures started to hit, we could see it right away," explains Water Utility service inspector Rene Puzach. "Originally we were catching it with meter readings. We'd be sent out to double-check the readings, and then we could see either water coming out of the house or the windows frosted up from the inside."

"A lot of California banks were like, 'Yep, it's locked up and secure. That's all we're concerned about,'" adds Ertel. "And then we started finding out that they didn't shut the water off."

Puzach remembers one vacant home left in shambles after months of leaking water.

"I was sent there to double-check the meter reading, and I knew right when I came up. I could see the windows were frosted up inside the house ... Water was coming from the second floor down into the kitchen, and the ceiling had broken."

Even though some out-of-state banks are starting to winterize abandoned homes, flooded houses are still common. Ertel and Puzach recommend that neighbors keep an eye on homes they know aren't occupied, because flooding can happen fast.

"From what I've seen, the majority of the time it's a toilet that breaks first. The tank bursts, and that starts the flood," says Puzach.

"If you know the house is vacant and you start seeing moisture building up on the windows – a lot of moisture – then you know there's water somewhere in the house," says Ertel. "These are things you can see from the street." 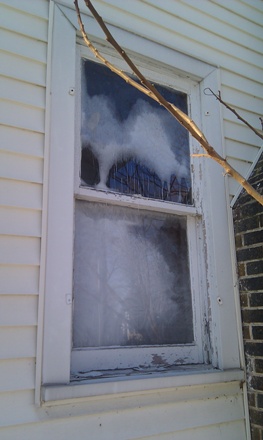 Even homeowners who are just leaving for a few days should make sure to keep their heat on at least 55 degrees, open any cabinets where sink plumbing is against an outside wall, and ask a neighbor to keep an eye on things.

"If they're going to be out for an extended period of time, then I would say have the house winterized professionally," adds Puzach. "If it's windy and cold, that's the worst. (The cold air) gets in through the windows. There may be some plumbing in an unheated space next to a window."

But Puzach and Ertel believe the worst flooded house stories may be behind them, thanks to Madison Water Utility's new Project H2O advanced metering system, which can alert Utility staff if very high water usage continues in a home for more than 48 hours. It's already lead to the detection of hundreds of major leaks across the city.

"Now with the new metering system, we can catch it much sooner if something happens," Puzach points out.

Madison Water Utility has also launched a new water usage tracking tool on its website that allows property owners to view water usage down to the hour. If a homeowner leaves town during the winter, her or she can check to make sure pipes aren't leaking from any computer or smart phone.

Puzach says catching a leak before a home becomes a "flooded house" is critical, because after the flood comes something even worse.

"The mold starts ... Once the black mold starts, that's a whole other layer of trouble."

To see what happens when a leak isn't caught, take a look at the video below. It was taken inside a vacant Madison home where pipes on the second floor burst last winter. The mess wasn't found until spring, when a neighbor noticed water pouring out under a patio door.


This content is free for use with credit to the City of Madison - Madison Water Utility and a link back to the original post.
Category: Serving the Community
Tags: Winter, freezing, pipes