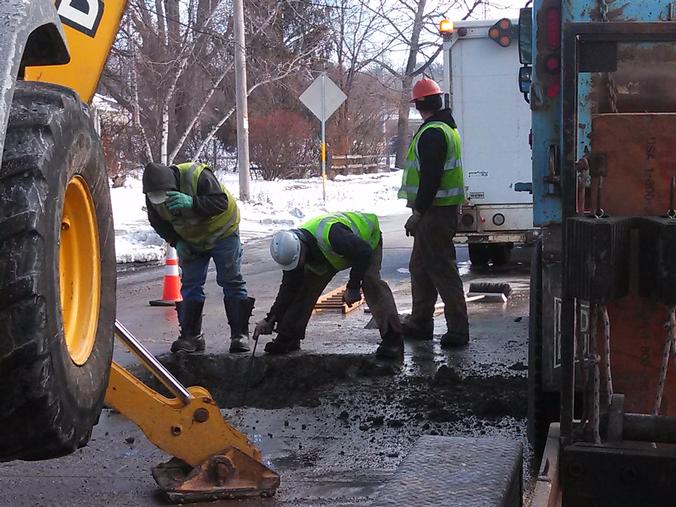 It's Friday morning in Madison, and the rush to work is underway. But on the city's southeast side, five co-workers have already been on the job for hours, dealing with a stream of water pouring down otherwise-frozen Buckeye Road. It's the city's 18th water main break in 8 days.

"As soon as this cold weather came in, I thought, 'Yep, we're going to be starting,'" says Greg Kolek, who works on one of Madison Water Utility's water main break crews.

The rapid drop in temperatures during the first week of December meant the utility's busy main break season started early – and suddenly. With little in the way of insulating snow cover, the frost line moved deep into the ground and hit the city's mains quickly.

"What happens is you start to get a little frost in the ground, and then in the main thoroughfares like this, the cars will come across and just drive the frost down further. And that causes the main breaks," Kolek explains. 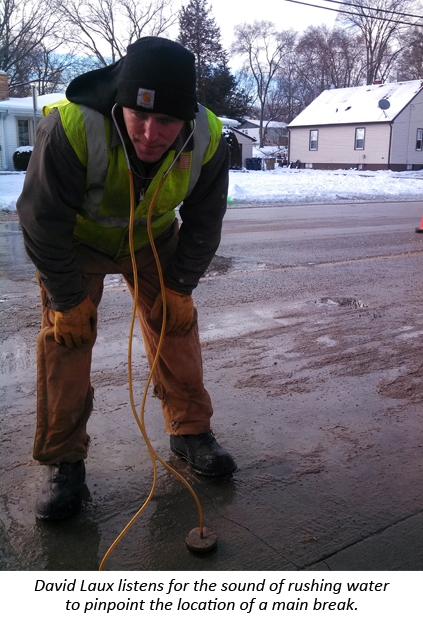 "In my heart, I think it's going to be a busy winter"

Madison Water Utility crews respond to more than 200 breaks every year, most of which happen in the winter and are repaired by just four crews. During cold, busy stretches, those crews often work well into the night, going from one break to the next.

"I've worked winters here where you never went home," says Dave DeLoof, who's been with the utility for 27 years.

DeLoof says it's tough to predict how busy this winter will be, but he's got a theory. And it starts with the break the crew is fixing on Buckeye Road.

"It's been a while since we've been out in this area. That's what makes me think there's going to be a lot of (breaks) – when we start coming out to areas that I have been to before when it's been a miserable winter. I think people who've been here 20-plus years can figure it out. It's still a guess. In my heart, I think it's going to be a busy winter." 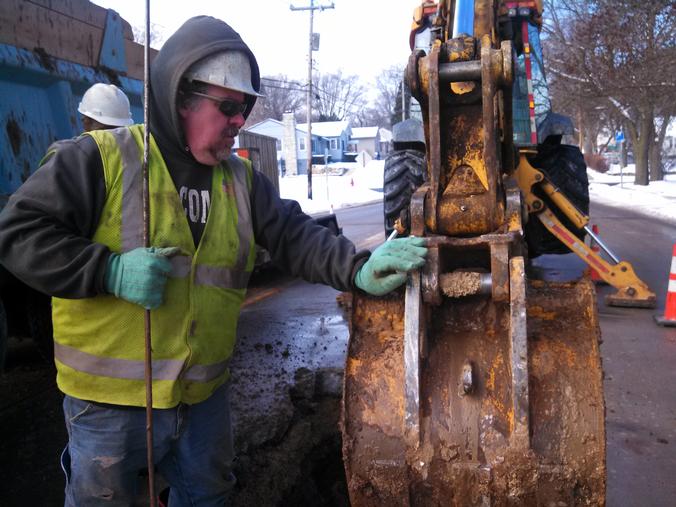 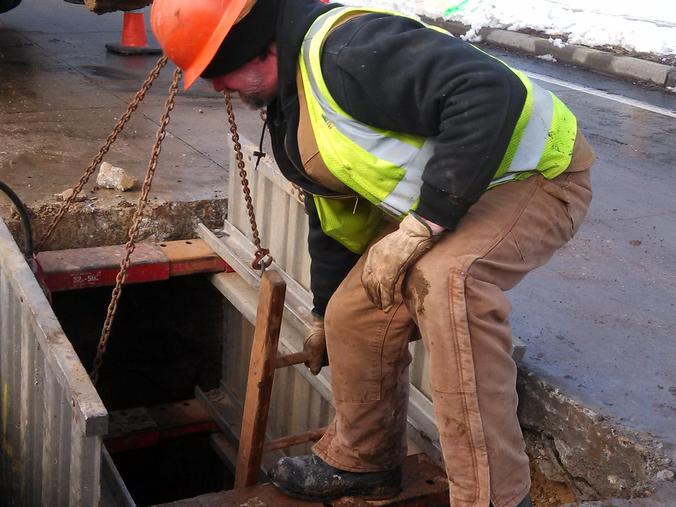 Even on the busiest days, the priority is always to get the main fixed and water turned back on for nearby homes as soon as possible, usually within a few hours. Crews are dispatched 24 hours a day from the utility's centrally-located operations center on Paterson Street, regardless of the weather.

"We bundle up pretty good, and if you're cold, you get in the truck and try to get warm. And then go back at it," says crew member Bob Kempfer. "It's part of our job. Whether it's rain, cold, snow – we're out in it." 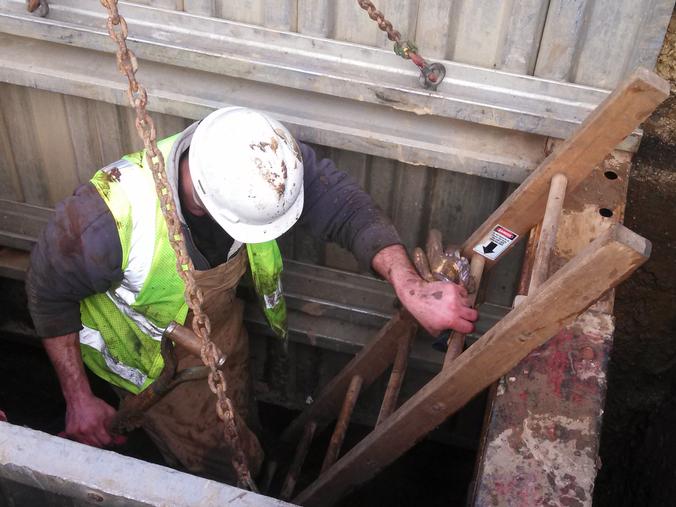 Leaning on each other

It's cold, wet, messy work. What makes the job easier is the crew itself.

"Basically, we just lean on everybody else. Everybody does the job together," says Kolek. "It's a good group of people down here. We all get along real well. We spend more time with these people down here than we do our families in the winter."

Being on the crew isn't just about getting along and getting a job done. It's also about looking out for colleagues working in very tough conditions, especially when it's time to go in "the hole" – a deep, muddy pit that workers must climb into to reach a main. Even though the mud, gravel and concrete are shored up around the pit, no one takes any chances.

"When somebody's down in the hole, that's not the time to take a break – even when it's really cold," says crew member David Laux. "Everybody's watching the banks, making sure nothing is going to fall in." 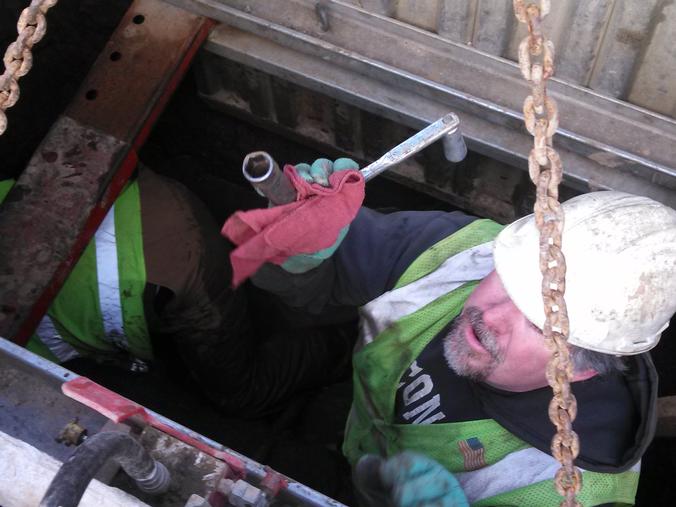 Madison Water Utility's Chris Villaneueva is the crew member in the hole today. Once he reaches the main, repairs go fast. By mid-morning, the break on Buckeye is fixed and the pavement patched. By the time Friday evening comes, commuters ready to start the weekend will be hard-pressed to notice anything happened at all.

But for Madison Water Utility crews, it will be on to the next repair, gearing up for a weekend filled with shovels, backhoes, mud, asphalt –

"And lots of coffee!" Kolek laughs. 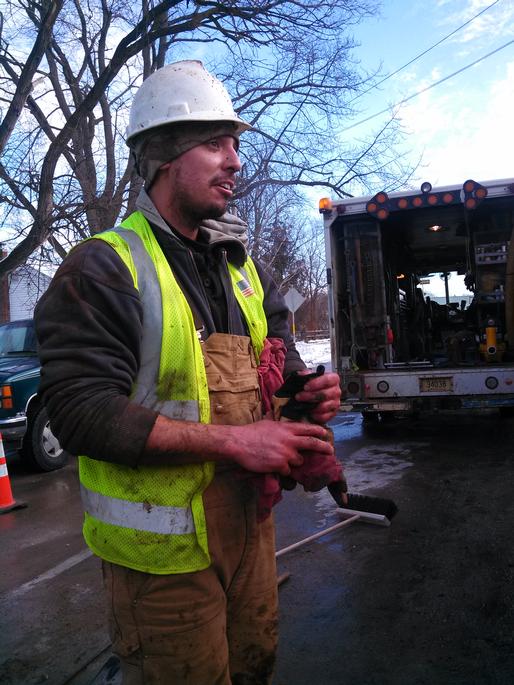 The high number of wintertime main breaks in Madison doesn't come as a surprise. The city's water infrastructure is approaching the end of its useful life – nearly half the pipes are more than 60 years old.  That's why Madison Water Utility is aggressively working to address the problem, ramping up from replacing just a mile or so of water mains a year to 7-8 miles a year. The final goal is an enormous one – the utility plans to renew or replace 400 miles of pipe over the next 40 years.

But even with vastly improved infrastructure, there will always be some main breaks in a city like Madison, where winters can be harsh and unpredictable. And there will be people like Kolek, DeLoof, Kempfer, Villaneueva and Laux ready lower themselves into the hole to fix them.

"It's something that has to be done," says Kolek. "This is our job."

This content is free for use with credit to the City of Madison - Madison Water Utility and a link back to the original post.
Tags: Clean Water, Main breaks, Operation center, Southeast, Water Quality, Water supply