“It’s amazing, really,” says the utility’s Water Supply Manager Joe DeMorett. “I don’t think anybody predicted this big of a change.”
Water use in Madison hit an all-time high in 2001, when Madison Water Utility pumped 12.2 billion gallons of water from wells across the city. Since then, water use has dropped by more than 27 percent.
Madison Water Utility also tracks the annual per-capita water use of people living in single-family homes, and the change is even more dramatic. In the early 2000s, people in Madison used an average of 75 gallons per-person, per-day. Last year, that number was just 50.8 – a 32 percent drop and a new record low. It’s a full ten gallons per-person less than five years ago.
Madison Water Utility General Manager Tom Heikkinen points to a combination of factors for the drop – more efficient appliances and plumbing fixtures; the loss of industry in Madison, like Oscar Mayer, which had been the city’s biggest water user; and a decline in outdoor watering because of several unusually wet summers.
“I think the most surprising thing is the consistency of the trend, it’s almost always in the downward direction,” Heikkinen says. “50 gallons per-person per day on a residential use basis is something that is well below what the textbooks say that you need to plan for a water system. It was not really thought that we would be getting that low.” 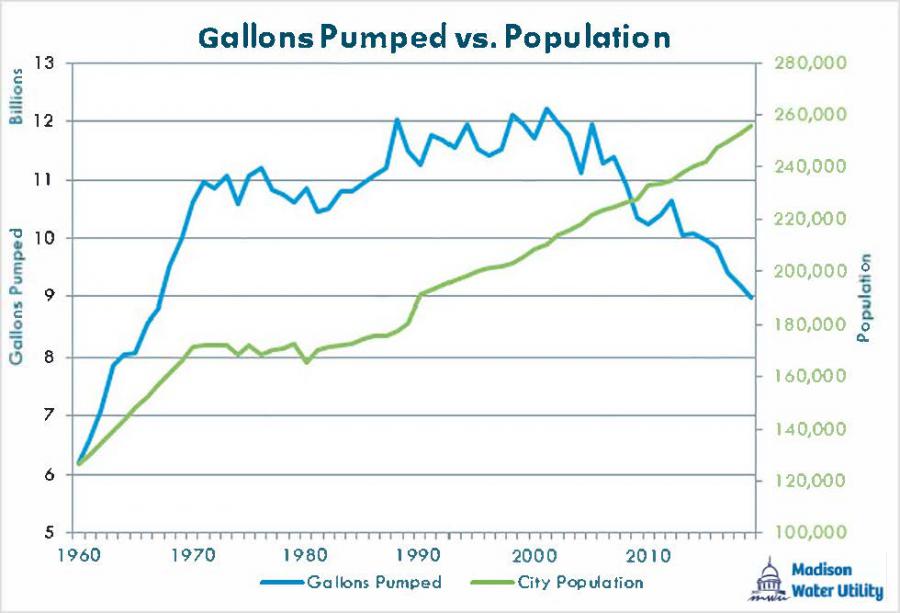 The decline in water use translates into a healthier aquifer system. The city pulls its water from a natural aquifer formed by layers of sandstone deep below ground.
DeMorett, a hydrogeologist, notes that aquifer water levels in the center of the city were on a decline from the 1950s to the late 1990s, dropping to a record depth of more than 130 feet in 1998. But over the last 15 years, there’s been a turnaround.
“(The aquifer) is a resource that we’re really blessed to have. You don’t want to go from a surplus to a mining situation where you’re not replenishing it,” he says. “At the current pumping rates, it looks like we are sustainable. In fact, the aquifer levels are actually increasing. I think that’s the biggest thing. We want water for our future generations.”
But conserving water may not be top of mind in Madison, at least not lately. The last several years are among the wettest city has ever seen.
“Last year was the 5th wettest year on record in Madison, and the year before, 2018, was the 2nd wettest. And 2016 was the 6th wettest,” says Steve Vavrus, Senior Scientist at the Nelson Institute Center for Climatic Research. “It’s amazing to have these three super-wet years within a four year period. It’s so unusual.”
Vavrus says all the rain is partially brought on by climate change and partially coincidence.
“I think that the magnitude of these wet years is probably too much to be accounted for just from climate change … The 1880s also had a very similar period of super-wet years. In fact, they are the other top three that are the wettest among the top six,” he explains.
According to Vavrus, Madison will see heavier precipitation in the winter and spring because of climate change, but summers are more uncertain.
“Summer, I think, is still a wildcard. We could be getting wetter overall but still have occasional drought summers,” he says. “There’s some concern that if we do have conditions favorable for drought in the future, that the intensity will be even worse because the temperatures are higher.”
While the decline in water use is something to celebrate, Vavrus points out that Madison’s last drought was just eight years ago.
“I think the uncertainty in summer precipitation in the future is the reason we shouldn’t just declare victory. There’s no reason we can’t get another summer like 2012 again,” he says.
Heikkinen admits that even with conservation, Madison Water Utility still needs to supply enough water to handle the worst-case scenario – a major drought or fire, or both at once. Still, conservation has allowed it to focus on replacing and repairing aging water mains and facilities, improving water storage by building new water towers, and adding treatment systems that remove naturally-occurring iron and manganese.
“We do have aging infrastructure that we’re trying to take care of. Just imagine what that would be like if Madison hadn’t conserved and we had to build more wells every couple of years in addition to the treatment facilities and water main replacements and all the other things we’re doing,” Heikkinen says.
In 2006, the city set a sustainability goal of a 20-percent drop in per-capita water use by 2020. Madison surpassed that goal last year. Madison Water Utility has been working hard to encourage conservation through its popular Toilet Rebate Program, which has saved a more than a billion gallons of water since 2009. And more than 12 thousand people are now tracking their daily water use online through the utility’s web-based conservation tool.
For Vavrus, whose work focuses on the planet’s changing climate, Madison’s commitment to water conservation is a bright spot.
“I’m trying to think of some good news to share instead of all doom and gloom,” he says. “So this is a piece of good news, that it can happen. The trend can be in the right direction.”
This content is free for use with credit to the City of Madison - Madison Water Utility and a link back to the original post.
Category: Sustainability
Tags: Conservation, Sustainability