MWU honored for winning Best-Tasting Water in the state! 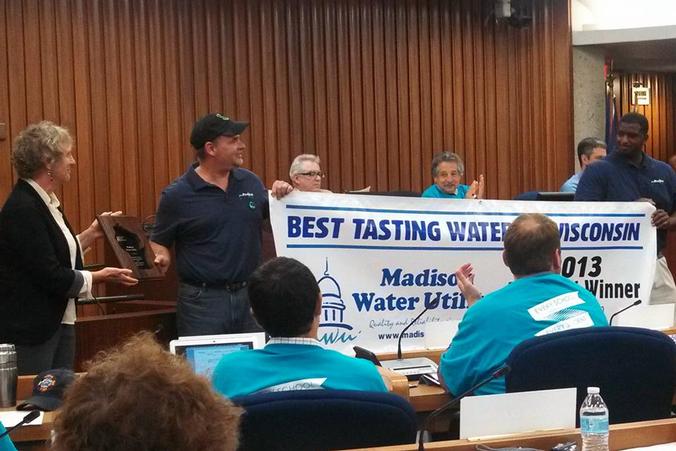 It's not every day that MWU employees stand before the Madison Common Council surrounded by cheers and applause. But it's also not every day that the city is honored by the Wisconsin Water Association (WWA) for having the best-tasting water in the state. 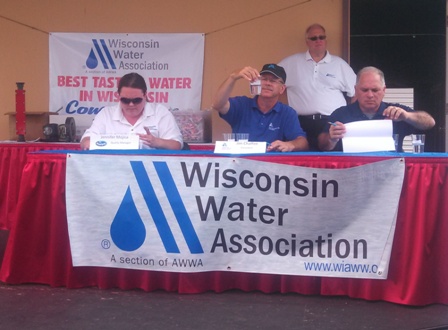 In August, Madison competed in the WWA Water Taste-Test at the 2013 State Fair against more than a dozen other Wisconsin municipalities and came away with the blue ribbon.

"We've been doing the Water Taste Test for many years, but this is the first year that we moved it to the State Fair," says WWA Vice Chair Ann Witmer, who presented MWU with a banner and plaque recognizing the achievement during the city's September 3rd Common Council meeting. "I think it's particularly noteworthy that Madison was the first winner at the State Fair at a very high-profile event that was well-attended."

On-hand to accept the award on behalf of all MWU employees were the utility's AFSCME Local 60 stewards Rick Marx and Donald Smith.

"I just want to thank the WWA for recognizing what we already knew – we have darn tasty water!" joked Marx as he accepted the award. Marx stressed that the win is the result of hard work from everyone at the Utility. "It takes an entire team to bring this darn tasty water to you."

The Madison Common Council also unanimously passed a resolution at the meeting commending Madison Water Utility for "the many contributions made by the staff to provide safe, high quality, and delicious drinking water 24-hours-a-day."

"I've waited a long time for this folks, and I think this is a really proud day for us," said Alder Lauren Cnare before reading the resolution to the council. Cnare is also a long-time member of the MWU Water Board.

The first-place win qualifies Madison Water Utility to compete in the North American competition and vie for the national title at the AWWA Annual Conference and Expo (ACE) 2014 next spring in Boston.