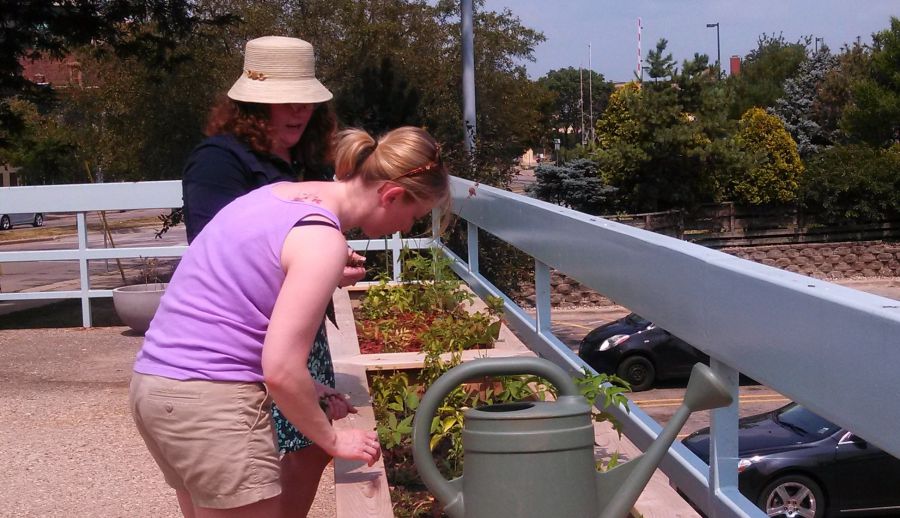 Just about every day Danna Olsen works in her garden, carefully weeding and watering. It's not a big garden, but it's hers.

"I like it that it's small," she says, hovering over her flowers, tomatoes and herbs, watering can in hand.

But Olsen's garden isn't in a yard or even in a park. It's on top of a nondescript, concrete-box of a building called Crowley Station, which has been sitting largely unnoticed off East Wilson St. for more than 40 years. It's one and only mission during those decades – to house a municipal well capable of pumping 2,300 gallons of water every minute throughout downtown Madison. These days, however, the small gray building is alive with another purpose, its rooftop now home to bright flowers and bees, earthworms and insects, squash, peas, hot peppers, all kinds of tomatoes, and yes, even a few weeds.

And it's got a new name – Crowley Station Community Garden.

"People ask all the time, 'Oh, why is there are garden here now? This is new! What is this space?'" says Danni Niles, communications director and co-chair of the new Crowley Station Community Garden. "We kind of have a city emphasis on (making) our city productive and beautiful and healthy. A community garden on top of a water well fits all of that." 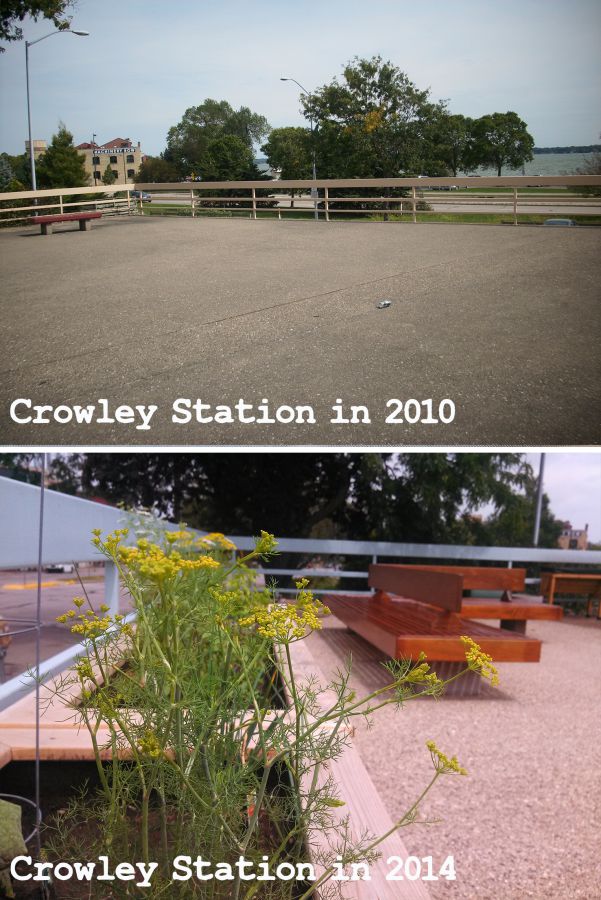 "It just takes some vision"

Turning a little-used concrete rooftop into an urban green space and gathering spot might seem like a no-brainer in a community that prides itself on thinking outside the box. But getting there was far from easy, even in a city that boasts more than 40 community gardens. Until Crowley Station, none were in the heart of downtown.

"It was years of conversations of, 'What can we do? How can we get land?'" recalls Olsen, who started working with the Downtown Community Gardens Group five years ago. She says there was plenty of demand for a community garden downtown, but there were also plenty of barriers. "Land's expensive, raised beds are necessary because the soil's not healthy. You need to bring in soil."

Every year the group collected hundreds of signatures on Capitol Square showing the community's real need and desire for a downtown garden, a place that would be walkable and welcoming for residents of Madison's most densely populated area. After an initial idea of putting a garden on the roof of Mifflin St. library fell through, the would-be gardeners were finally introduced to a group of neighbors living near East Wilson St. who called themselves "Friends of Crowley Station." This is a First Settlement Neighborhood group that was formed with the goal to improve, activate, and transform the Crowley Station into a neighborhood living space. The Friends of Crowley Station have built custom benches for the spot, set up tables and chairs, even brought in public art installations and a Little Library. And what the space needed now was some serious greenery.

"In 2013, everyone kind of came together – Downtown Community Gardens Group, First Settlement, the alders, Parks," says Niles. "But it wasn't really until the Water Utility came onboard and said, 'Yes, we're going to back this'...that things really took off for this site and we had real progress."

In the fall of 2013, Madison's Common Council allotted $10,000, to be paid for by Madison Water Utility, to help create the Crowley Station Community Garden. After years of site searching, petitioning and planning, neighbors living downtown would finally have a garden space to call their own.

"It just takes finding people who are willing to be visionary," Niles says. "The Water Utility willing to say, 'Hey we're going to put raised beds on a place that isn't green,' takes a lot of imagination. It just takes some vision."

From vision to reality

How do you put a garden on top of a water well? It helps to have friends and neighbors who are totally invested in making it happen.

"One weekend we carried 13 tons of soil into these beds by hand, with buckets and one wheelbarrow," Niles says. "The thing that (garden) members said at the end of that – even though they were tired and sunburned – was, 'Oh, we should put more beds up here!'" 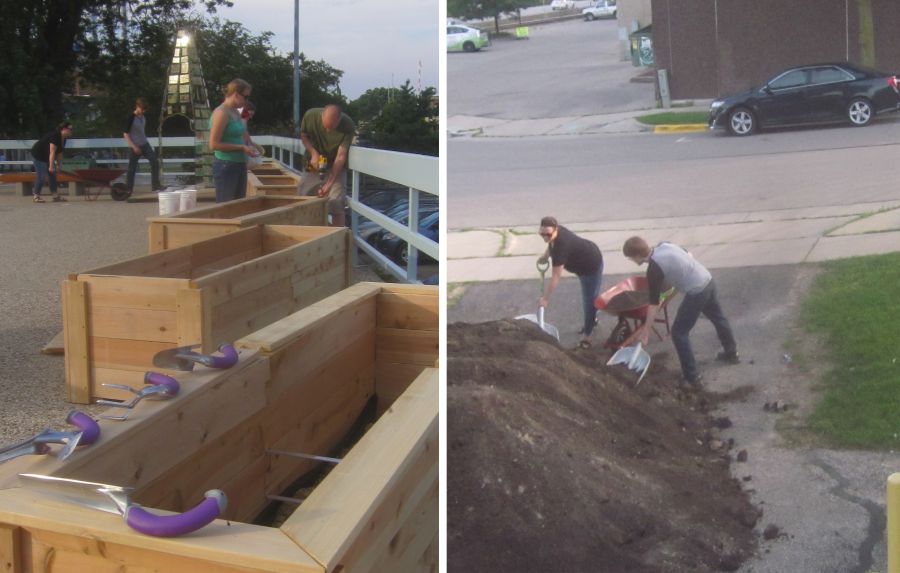 After weeks of hard work, the rooftop railing is now bordered by neat, raised wooden beds. There are watering cans, a locked storage box for tools, even a compost bin – all meticulously maintained.

"Madison Water Utility wanted an organized effort that would take care of (the garden). They didn't want to be managers of the plantings. So we had to show that we would be responsible for that," says Olsen, who points out that the small garden boxes are perfect for beginning gardeners. "It's a really safe place to learn without taking a huge plot and feeling overwhelmed."

For Niles, the garden offers a simple connection to home.

"I grew up on a farm. Having garden space is really crucial to my well-being and feeling like I can make a home here. If you live downtown and you work downtown, you don't have a lot of time to devote to 400 square feet of garden. You just want to connect to earth in a new way. You want those fresh herbs, or you really love zucchini, so you plant zucchini. It fits our neighborhood really well." 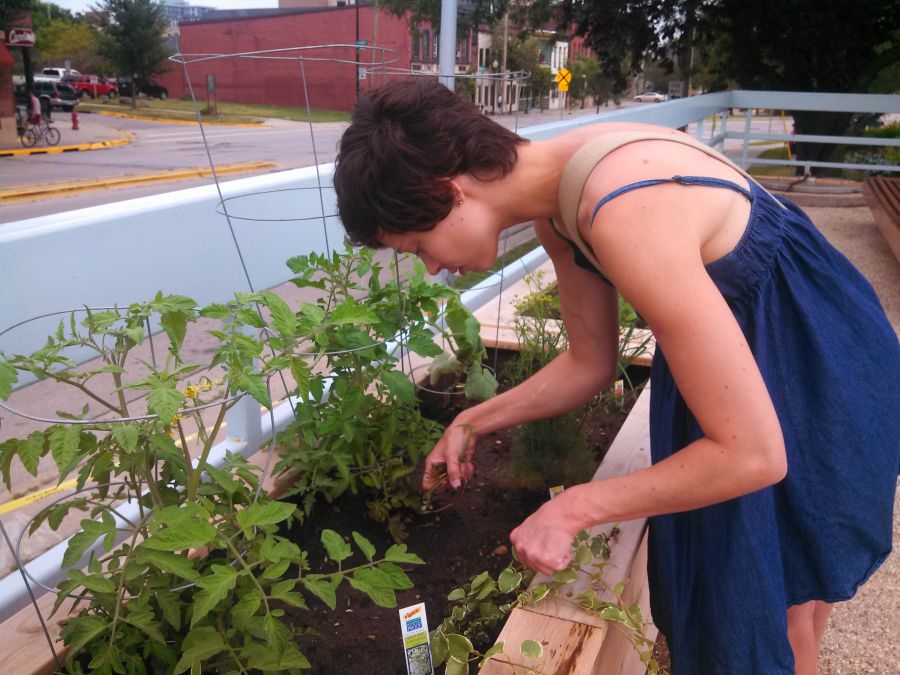 And she says the garden is only the beginning for Crowley Station.

"This is a place-making opportunity; it's a community-building opportunity. We're talking about having a grand opening and having yoga on the rooftop."

Olsen and Niles admit building the garden was a long, often frustrating journey. But finally getting here, putting their hands in the soil, weeding and watering, harvesting the first vegetables, bringing some life into a place dominated by concrete, makes it all worthwhile.

"There are some communities that struggle to get gardens, and it never happens for them," Niles says. "Madison is very lucky that we have a lot of support. But it takes the City. It takes real organizations who can back it in different ways than community groups can to make something happen. It needs to be a partnership."

This content is free for use with credit to the City of Madison - Madison Water Utility and a link back to the original post.
Category: Serving the Community
Tags: Community, Placemaking