No easy answers for Well 8

How do you measure something below ground – not just where it is, but where it might be headed, and how fast? They’re questions groundwater expert Jessica Meyer, PhD., tackles every day.

“No matter what we do, our understanding of the subsurface is incomplete. You can’t see all of it. You can’t even see a majority of it with the techniques available to us. And prediction – I think what’s really important to understand – always includes some degree of uncertainty.”

In late 2014, Madison Water Utility hired Meyer as an independent consultant to examine data related to a chemical contamination plume emanating from Madison Kipp Corporation on the city’s east side. For decades, the company used degreasing solvents as part of its manufacture of precision auto parts. Those degreasers eventually leaked into the soil beneath the plant, contaminating groundwater with a chemical called tetrachloroethylene, or PCE. The leak is believed to have happened nearly 50 years ago, creating a plume of contaminated groundwater that is now largely concentrated beneath a company parking lot.

Just a few blocks away, nestled in a hillside next to Olbrich Park, sits Madison's 1940's-era municpal water well known as Unit Well 8. Very low levels of PCE have been detected in upper groundwater within 600 feet of the well, indicating the very edge of the plume.

“The distance between where we know that plume to be now and Unit Well 8 is not a huge distance,” Meyer says. “But (Madison Kipp) has an understanding of where that PCE is, and that’s important. And it’s not at Unit Well 8.”

But will it ever get there?

Madison Water Utility currently uses Well 8 only seasonally, during the high-demand summer months. But the utility wants to revitalize the 70 year-old facility and use it year-round to meet demand and provide better fire protection on the east side. That means figuring out where the plume is and where it’s going is crucial. Madison Kipp sought to do that by drilling monitoring wells and conducting a series of detailed groundwater studies over the past several years. Findings were summarized in a 2014 report created by the design, engineering and consulting firm ARCADIS.

“They presented (their conclusions) in one report, primarily, that was focused on evaluating this question of whether the PCE contamination is going to impact Unit Well 8 at some point in the future. And their primary conclusion was that it was unlikely.”

The report stated that, “ ..the PCE plume stabilized after approximately 45 years of transport, approximately three years ago. These results suggest that Unit Well 8 will likely not be impacted by PCE in groundwater at the site if Unit Well 8 were to become operational in the future.”

It appears to be good news, but Meyer is more cautions. She spent weeks poring over the site conceptual model, monitoring network and groundwater contamination modeling cited in the report. In her opinion, the conclusion that PCE is unlikely to impact Well 8 is too definitive. (Read Meyer's full summary of her findings here)

“I don’t think the support provided for that conclusion warrants that degree of certainty.”

Meyer describes the decades-old plume as a “very aged problem’ and agrees that it doesn’t appear to be moving very fast.

“It’s not that I don’t agree in general that we expect that plume to be moving relatively slowly … (But) site-specific conditions determine exactly how slowly it’s moving, and measurement of those conditions includes some uncertainty. Understanding how that uncertainty affects our predictions is critical. I would say that the ARCADIS report didn't fully address that.” 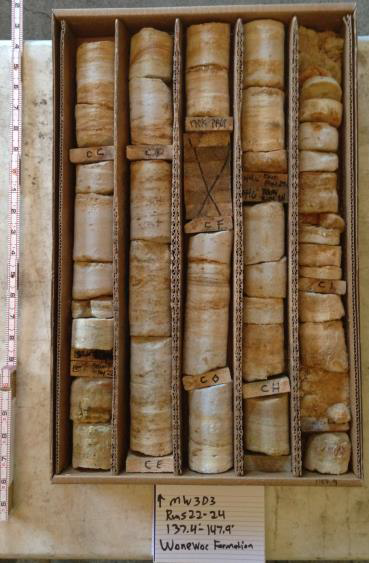 Based on the data she’s seen, Meyer says it’s still unclear whether the plume will reach Well 8. But what is clear is that a process called rock matrix diffusion is working to significantly slow its movement. Surrounding rocks are actually absorbing the PCE, pulling it out of the groundwater.

“This process of diffusion is incredibly important to understanding this problem. So what ARCADIS and Madison Kipp did is they applied a technique where they actually drilled a core – so they pulled up the rock core itself – and they sampled that rock for PCE,” Meyer says. “They were sampling that core about once a foot, so you get this incredibly high resolution understanding of that contaminant distribution.”

Meyer, who has trained students, researchers and consultants across the world to carry out rock core sampling, says the relatively cutting-edge process has allowed Madison Kipp to quantify the amount of contaminants moving into the rocks.

“When I look at those rock core profiles, what I see are relatively high concentrations shallow in the (groundwater) system and those concentrations drop off pretty sharply at around 170 feet below ground surface. And you see non-detects or very low concentrations in the rock beneath that. That’s a very nice, very quantitative characterization of the depth of contaminants at that location. And that was done at two locations at the site.”

Still, Meyer would like to see rock cores pulled from more locations, as well as a “beefing up” of the monitoring network between the plume and Well 8.

“I think it’s important to consider monitoring in a relatively dense fashion in the vertical dimension. So instead of having a shallow (monitoring) well and a deep well, maybe there would be five points or seven to provide a better understanding of how these contaminants are moving vertically…(Madison Kipp) has actually installed four multi-level systems for exactly that purpose. So I would consider implementing a similar approach, but further in the down gradient direction.”

The contamination plume has long been a concern for people who get water from Well 8. Meyer says they may be able to take some comfort in a so-called “pump-and-treat” system Madison Kipp is implementing.

“They’ve installed a well that’s down gradient of the source, between where they think the source zone is and Unit Well 8. The idea here is that if they pump that well, (it’s) going to capture the contaminants moving from the source zone towards that well. And if that well captures the contaminants, then they can’t continue to migrate toward Unit Well 8... It definitely can have a positive impact. It creates what we call a hydraulic barrier.”

Meyer also points to a vertical separation between the plume and Well 8.

“That’s a pretty powerful separation in terms of the flow system in this area…flow in the bedrock has a strong lateral component,” she explains. “The maximum depth of contamination, if you look at those rock core profiles, was about 170 feet. Unit Well 8 is drawing water from significantly deeper than 170 feet.”

But pumping Well 8 full time brings yet more uncertainty into the picture. 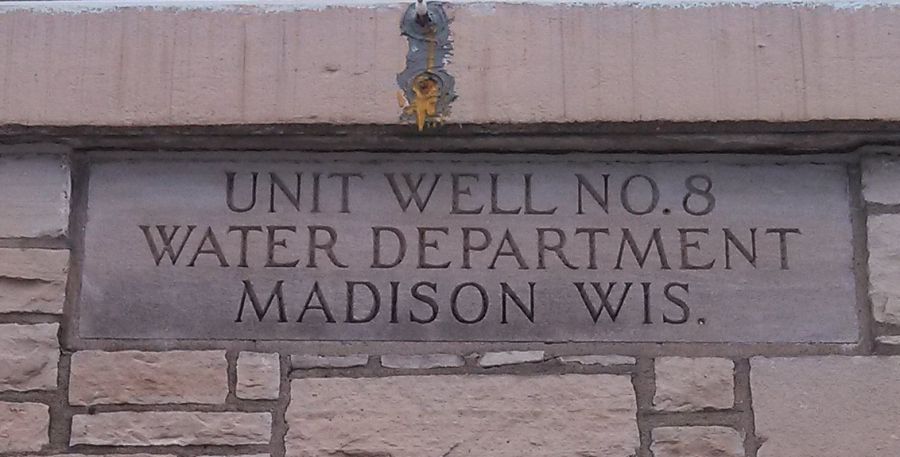 “When you turn on a pumping well like that, you’re going to induce a strong potential for water to move downward. That strong potential already exists due to other municipal pumping wells operating in the area. But that still doesn’t mean water that’s contaminated with PCE is going to reach Unit Well 8. It could flow right by it.”

And as it flows, the concentration of PCE in the plume will likely continue to drop.

“There’s a whole bunch of other processes that are working on those contaminants that are actually reducing concentrations along that path from the source zone to the well, like diffusion, degradation and dilution.”

For Meyer, there’s no way to say for certain exactly what will happen as contaminated groundwater moves through the tens of thousands of rock fissures that may or may not bring it to Well 8. A slow-moving plume with no current contamination source doesn’t appear to pose an immediate threat to drinking water, but that doesn’t mean there is no threat at all. One thing Meyer can say with certainty is that the PCE contamination will be a long-term problem, which is why Madison Water Utility plans to include space in any remodel of Well 8 for a treatment system to remove PCE.

“That plume is going to persist for some time. If the pump-and-treat well is in place and operating effectively, that will really reduce, in my mind, a lot of the concern with respect to Unit Well 8. But I think it’s necessary to continue monitoring and managing it properly. I don’t think it’s something that we can kind of turn the switch off and walk away anytime soon.”

Madison Water Utility has included funding to rebuild Well 8 in its 2016 budget plans. It will likely spend 2015 soliciting community input and looking at additional monitoring options in light of Meyer’s report.

Madison is far from alone when it comes to PCE groundwater contamination. Meyer has worked on similar contamination sites in sites in California and Dane County and worked as a collaborator on sites in Ontario, Germany, and Brazil. They are unfortunately extremely common, and in some cases, there is no company left to take responsibility for a spill that happened decades ago.

“These solvents were very useful, they were in high-demand, and we didn’t necessarily have good guidance on how to dispose of them … In fact, some guidance sheets recommended pouring the solvents on the ground. The thought was that they would just volatilize into the atmosphere. That’s not actually what happened.” 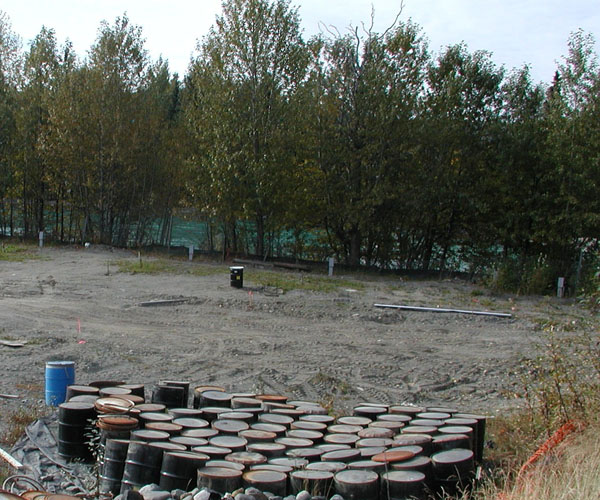 Meyer explains that chlorinated solvents like PCE are denser-than-water, oily-phase liquids, which means in groundwater systems they have a tendency to migrate downwards. The deeper they get in the sub-surface, the harder it is to observe them and figure out where they have accumulated, making remediation difficult.

“With chlorinated solvents in fractured rock, I think we’re beginning to understand how to characterize it, how to really get a quantitative handle on what’s there. And we’re moving forward with getting an understanding for potential ways to remediate it…We didn’t realize early on how these contaminants would behave in the subsurface. And so we’re dealing with the effects of that now ... These issues are going to be with us for a while. Definitely.”

This content is free for use with credit to the City of Madison - Madison Water Utility and a link back to the original post.
Category: Water quality
Tags: Madison Kipp, Well 8, Testing