Sometimes, it's what you don't see

The stories keep coming in – the landlord who found a broken showerhead spewing water in an unoccupied apartment; the man with a silently running toilet; the couple unaware that a burst hose was gushing in their yard.

"They normally say, 'It's impossible. There's no way for that much water to be used and I wouldn't notice it,'" says Madison Water Utility customer service representative Sherri Becker, who often fields calls from customers who've gotten a "continuous usage" letter from the utility to alert them about a possible water leak.

Fellow customer service rep. Pam Mousley sends out the letters, which are based on hourly data transmitted by the utility's new Project H2O wireless meter reading system. So far, more than a thousand letters have been sent out to homeowners whose meter readings show unusually high continuous water usage, even during overnight hours, for at least three days in a row.

"There are more letters going out, catching things earlier," Mousley says, noting that before Project H2O, many customers didn't discover leaks until they got their 6-month bill. 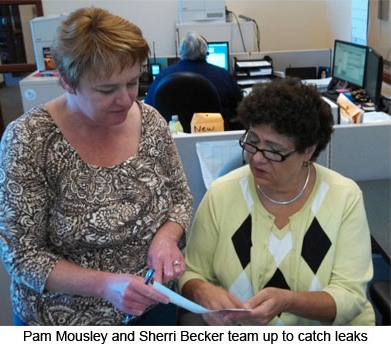 When a letter isn't enough

Mousley recalls one Friday afternoon when she spotted extremely high continuous water use at a Madison home – an alarming 145 gallons every hour. She immediately tried to contact the homeowner.

Then her husband got on the phone and mentioned that the couple was going out of town for the weekend. He told Mousley the meter was behind a basement wall panel, so he couldn't see the use it was recording. And he was skeptical that anything could be wrong.

"I said, 'A week ago you were using 45 gallons an hour, now you're using 145 gallons an hour,'" she recounts. "'That tells me there's something going on. Walk around the house, check your spigots.' He called me back within five minutes. He had an outside spigot that had been turned on – it was connected to a hose in the yard – and the hose had burst."

Skepticism is often the first reaction when a customer opens a continuous use letter.

"At first I thought, 'Oh no, we don't have something running overnight,' admits Tim Morrissey, a customer in the Town of Madison who recently received a letter. "But my second thought was, 'I guess I'd better look around the house!'"

Morrissey quickly found the culprit – a broken toilet in a rarely used part of his home.

"An old rubber gasket just gave way. It wasn't like you could hear it. We sure saved a lot by catching it so quickly."

Sometimes, customers notice high usage on their own. Jean F. called from south Madison concerned that her bill seemed unusually high, but she couldn't figure out why.

"Sherri told me how to check the shower and laundry usage by writing down before and after numbers from the meter," says Jean. "She suspected there was a leak." 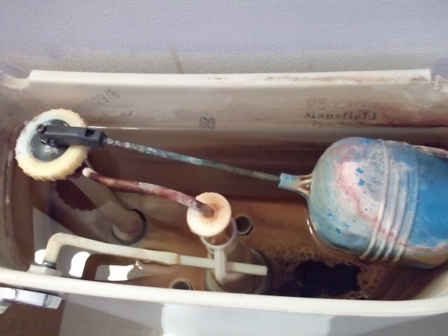 And there was. A quietly running toilet was once again to blame. Jean was able to fix the leak and apply for an MWU leak credit to reduce her bill. She was so relieved, she sent Becker a thank you note.

...thank you for your patience and compassion last Friday. You are the perfect person to handle an upset like this. I was facing something possibly very costly and urgent, both from a natural resources perspective as well as dollars. You can't imagine our relief that this was an easy fix.

Becker, Mousley and everyone in MWU's customer service department hear "thank you" pretty often these days. And yes, Mousley says she got a big thank you from the couple with the burst backyard hose.

"They were very grateful," she says. "I was just happy that they found it. I was as happy as they were!"