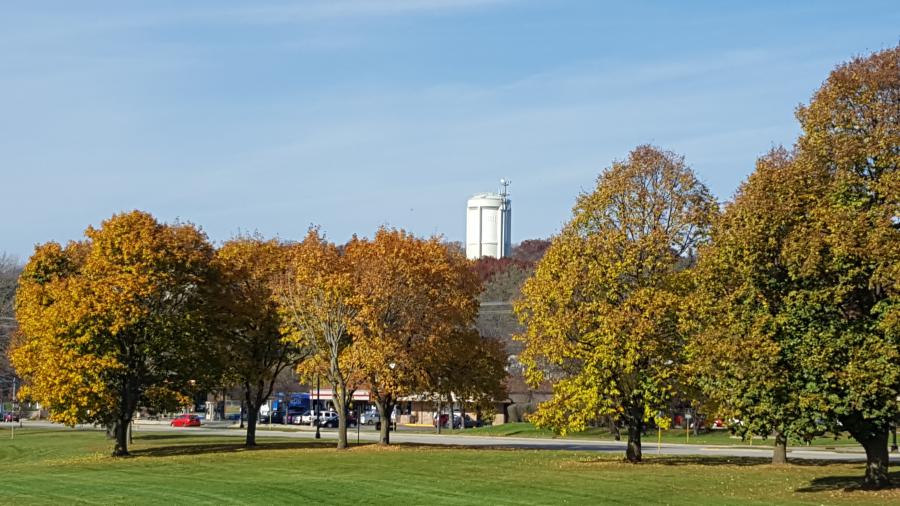 It sounded simple. Madison Water Utility needed to build two new water towers to serve two different areas of the north side, but it only had one site to work with. So why not just put two tanks inside one tower?

"I immediately got the response from potential contractors that this was going to be a challenge, and it may not even be possible,” recalls MWU principal engineer Al Larson.

On the site stood a small, aging water tower built in 1938 to serve the Lake View Hill Sanatorium, now home to Dane County Human Services in Lake View Hill County Park. Madison Water Utility planned to build a new tower to replace the old one that would actually hold two ​separate reservoirs inside. A smaller tank on top would serve the immediate, higher-elevation neighborhood surrounding Lake View Hill Park, and a bigger bottom tank would serve homes and businesses in a larger area down the hill, from Cherokee Marsh to Maple Bluff. 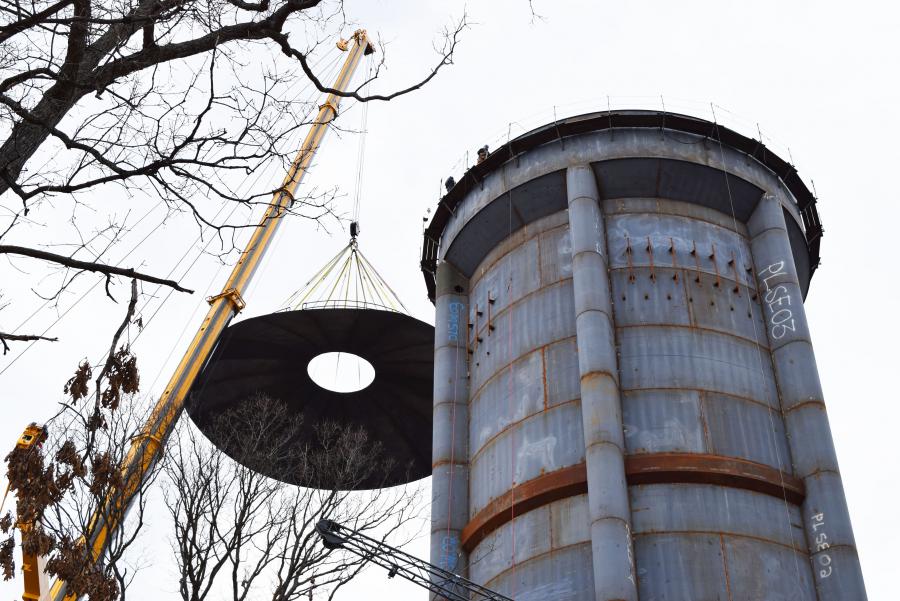 Once completed, it would be the first dual-zone water tower ever built in Wisconsin and hold a total of 1.3 million gallons. And it would be perhaps the most unique infrastructure project in Madison.

“You’ve got a million gallons of water on the bottom. You’ve 300,000 up on top. And you’ve got an empty spot in between them. So you’ve got to balance all these forces, and structurally, you’ve got to support it,” Larson explains. “It turned out to be a lot harder than I thought it was going to be. The contractor was designing almost as fast as they were building.” 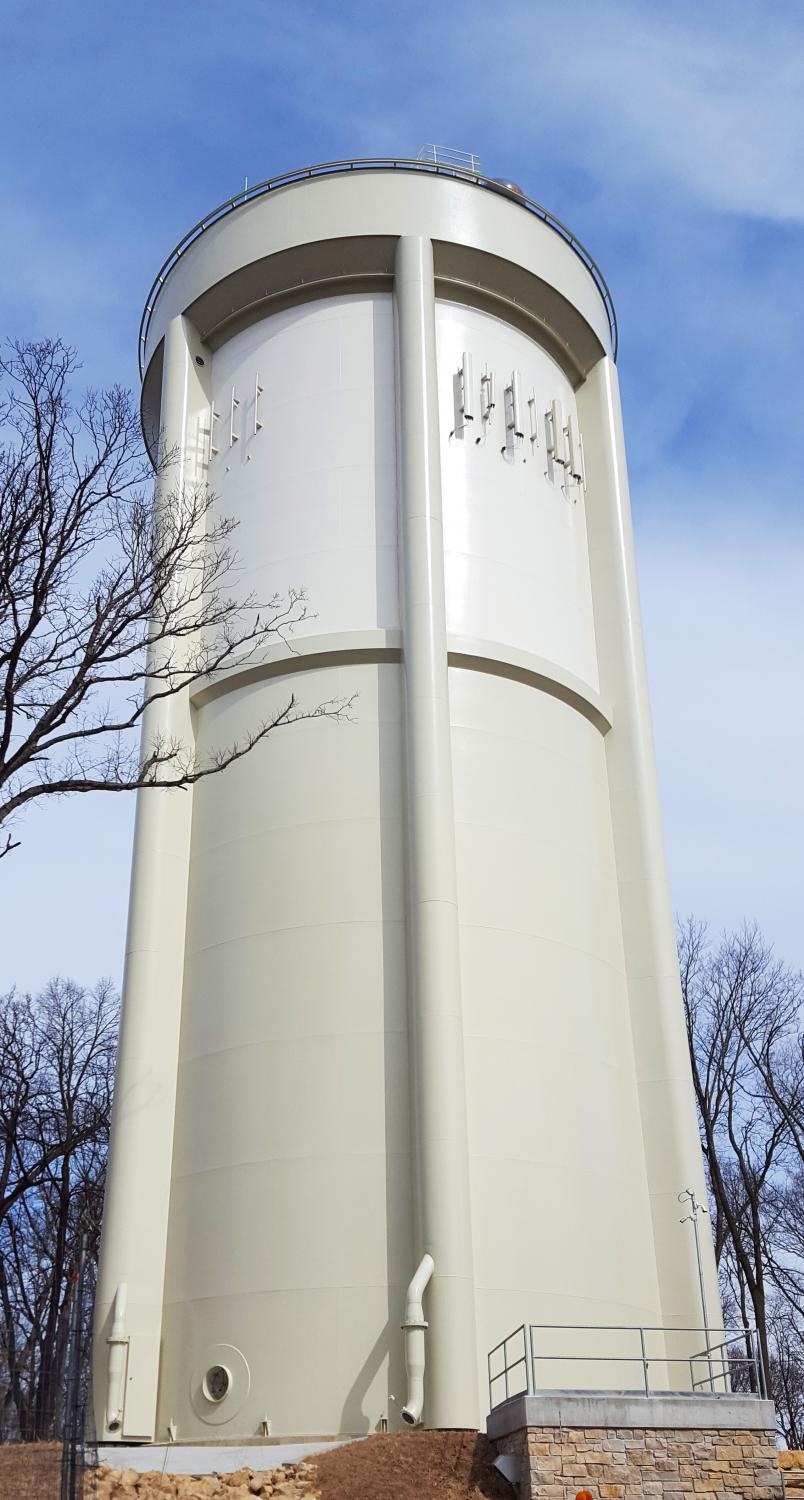 Madison Water Utility also took the unusual step of hiring an architect for the project.

“With it being in a parkland area and high on a hill, visible from long distances, I think Madison Water Utility wanted some help with what it looked like,” says Bob Mangas, an architect with Potter Lawson, Inc.

Mangas drew inspiration from the original “legged” tower to design the new structure, which had to be the same height as the original and occupy approximately the same footprint in the park.

“So that’s why there are five pilasters that wrap around the circumference. They’re intended to be kind of a representation of support legs,” Mangas explains. “We had to come up with a concept that had the size and shape and proportion to allow the storage volume that was being requested.”

Lake View Water Tower took four years to build from start to finish, and today it stands as one of the most visible structures on the north side. The tower earned a 2018 Engineering Excellence Best of State Award from the American Council of Engineering Companies (ACEC) of Wisconsin and earned a national Honor Award from ACEC in Washington D.C.

But for Larson, the project isn’t about getting attention or awards, it’s about bringing better fire protection and safety to much of the north side for generations to come.

“If you had a big fire, that tower would give you everything it can, with no restrictions. With proper maintenance, we’re planning that this should last 100 years.”

“To be involved with the health and safety of people in Dane County – it’s really an honor to be part of a project like that,” adds Sanford. “I’ll be able to point to that for years and show my grandkids.”

“We had to come up with a way that we could put a multi-functional modern facility onto a very small site and still be able to move around the site and do the functions that we needed to do as a water utility,” explains Larson.

Joe Daniels Construction Company was general contractor on the project, with Mead & Hunt designing the new facility. The original Ops Center was in a historic building, and that played a big part in the design.

“We wanted to preserve a portion of that history,” Larson says. “So we had to preserve the brick façade and how the older building looked, and then try to match in the newer building and modify the old building to meet our functional and operational needs.”

It made for a complicated but critical project for the utility. 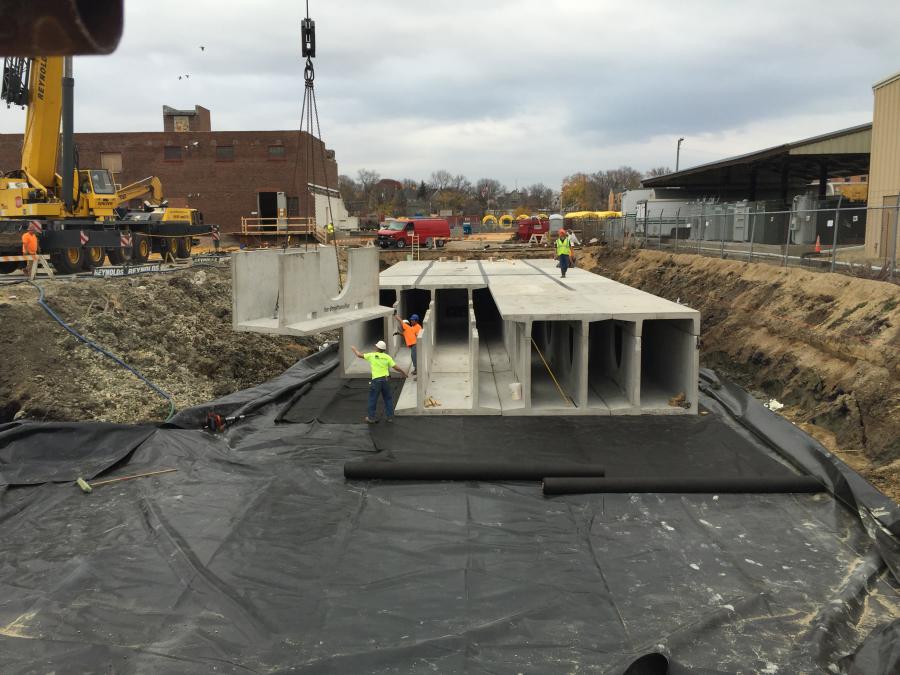 “Normally on a development you build a pond to handle storm water. But if you don’t have any space, what do you do? We put in a tank underground to remove sediment from the runoff, so it’s essentially storm water treatment,” Larson says. “And then that treated water is discharged into the storm sewer system at a very slow rate.”

The new facility was also honored with a Project of Distinction Award by the Association of Builders & Contractors and a national ACEC Recognition Award.

I was very impressed with the Water Utility’s dedicated and focused efforts to improve conditions for their employees and the neighborhood. This facility is a model for urban renewal and how industrial working environments can enhance a neighborhood,” says Keller.