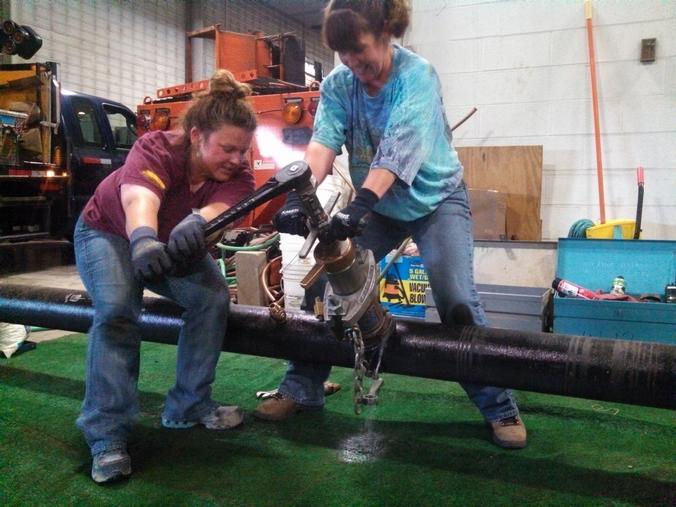 It's not easy. Tapping a copper line into a gushing water main takes skill, speed, strength – and a willingness to get soaked. But members of Wisconsin's first ever women's tapping team are ready for the challenge.

"I thought, 'We have enough women in the utility, we could do this,'" says Kara Jafferis, on-call coordinator at Madison Water Utility.

Tapping competitions feature teams from water utilities across the country who race against the clock – and each other – to tap a line in the fastest time. Winning times are often well under two minutes.

"In Denver, I picked all the other women's teams' brains on how they started, how they practice, how they have improved on their times over the years," Jafferis says. "All of them were extremely encouraging."

Jafferis and the rest of the team have also been getting plenty of tips and encouragement from MWU's men's team, the Mad City Tappers.

"All of them are rooting us on. Definitely has a family feel in the support we get," she says.

MWU's women's team draws members from departments across the utility – from engineering to finance.

"As soon as I heard about it, I wanted to do it," says MWU Account/Computer Specialist Lori Suiter. "I guess I've always been kind of tomboyish, and it sounded like fun."

Lori encourages her friends to take a look at video of the Mad City Tappers in action (below) to get a feel for what tapping is all about.

"I explain how we're actually physically forcing a bit through the ductile iron pipe until it makes threads where we can put a (connection piece) in there," she says.

It's exactly how MWU crews in the field connect a service line to a water main to bring water to a home or business – except everything happens a whole lot faster.

"It's hard work, very hard work," Suiter says. "It gives you an extreme appreciation for what they do in the field."

Team members are busy preparing to make their competition debut at the Wisconsin Water Association conference in mid-September.