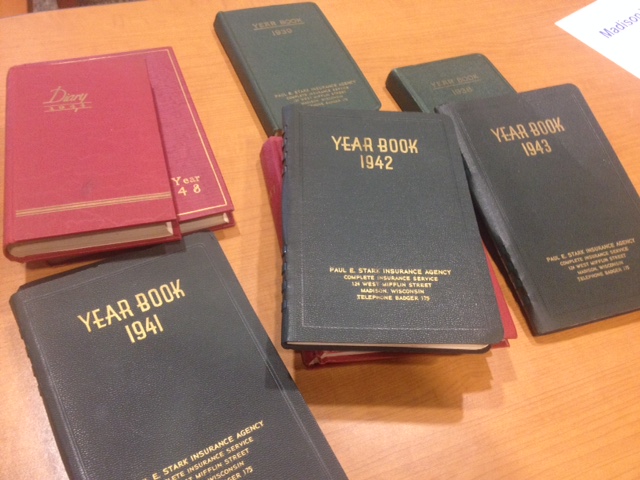 They’re not exactly what Madison Water Utility supervisor John Kaioula expected to find when he started clearing out his office in preparation for reconstruction of the utility’s Paterson St. Operations Center.

“I had a big desk in my office, and way in the back I found these journals. I just wanted to see what they were.”

He pulled out ten neatly bound notebooks, each filled with hundreds of handwritten pages dated between 1938 and 1948.

“I started going through them, and since I’m Hawaiian, I had to look up Pearl Harbor Day.”

He found one of the briefest entries in the entire collection, reading simply, “Japan attacked Hawaii this afternoon.” The next day’s entry included another line, “U.S. declared war existed between Japan and USA this afternoon. Signed by President Franklin D. Roosevelt 4:10 P.M.”

Kaioula wasn’t sure exactly who wrote the journals or why, but knew he’d come across something special.

“I shared the books with the group in the office. They started looking up dates too.”

“I thought we’d find maybe old tools or something when we moved out of the building, but not journals,” says utility dispatcher Karin Daane. “They were very interesting.”

It turns out the journals are a piece of Madison Water Utility history, diligently kept day in and day out, year after year by utility assistant superintendent Elmer (E.L.) Nordness. His journals are part personal diary and part detailed work log, with mentions of bowling tournaments, vacations and Badgers football scores right alongside water quality testing schedules and main repairs. Many entries describe construction of two new Madison wells with help from the Works Progress Administration (WPA) in the late 1930s.

Nordness writes without embellishment. There is no drama in the journals, only a simple, mattter-of-fact daily picture of what working life was like in Madison more than 70 years ago.

“Last day for Pete Lochner, Willie Howe, John Kerins, Adolph Buser and Harry Holm,” he recounts in an entry about retiring coworkers. “They were given bill folds with names on them and a dollar bill in each. Kerins was given a $5.00 pipe, a tobacco pouch and 16 packs of summertime tobacco.”

But after 1941, something else begins to creep into the often mundane, sometimes humorous daily entries – World War II.

Did not bowl at Beaver Dam because Art Jorgenson was given a farewell party. He has been called as a 1st Lieutenant in the U.S. Army. - March 15, 1942

Talked to Harley about getting letter from Draft Board … - May 8, 1943

By mid-1942, acquiring scarce supplies like fuel and rubber is an ever-present issue for Nordness and the utility.

Got rationing certificate for one retread from Tire Rationing Board. They refused request for new tire. - May 26, 1942

The utility also begins tightening security – photographing and fingerprinting all employees, even bringing in armed guards.

Spent most of the day with Mr. Walter Measure of Dist No. 2 of Sixth Service Command of U.S. Army … He wants distribution system map, list of aliens, naturalized citizens, no. of decendents, kind and time lost, plans of buildings … 24-hour armed guards at main station, remove all but 1 or 2 gal. of linseed oil and turps from main station, all keys to units brought in except those used by certain employees, fingerprints of all employees and their identification cards. - Jan 12, 1943

Arranged with Police Dept. to buy a revolver for our guards. Had check made to be issued to Defense Supplies Corp. $28.21 to pay for it. Will buy holster and belt when gun arrives. - March 19, 1943

Nordness doesn’t dwell on the emotional impact of World War II, but as the months and years pass and as his own son is called to duty, what’s happening overseas becomes more and more important in Madison.

“They didn’t have major network news all over,” notes Madison Water Utility employee Jacqueline Frandle. “So people got together, they shared information.” 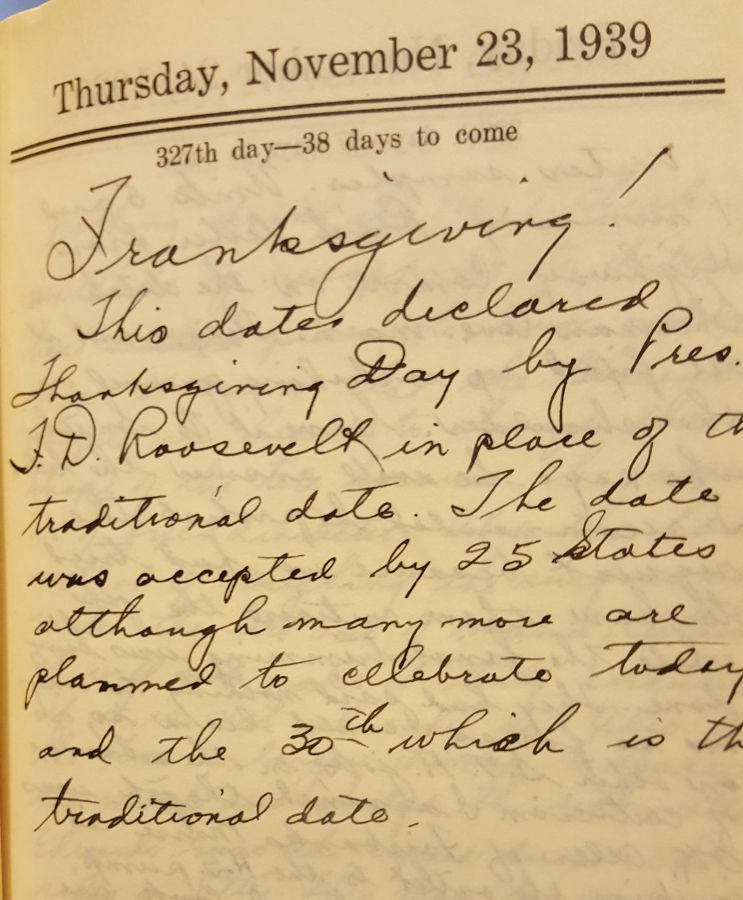 Frandle isn’t as struck by the differences between life at the utility now and 70 years ago as she is by the similarities.

“He mentions family stuff, like socials and gatherings. And today the water utility still has a big family component. A lot of people here do things together outside of work.”

“Hurt left ankle last night at Department Heads vs Common Council baseball game,” reads an entry from 1941. “So Oakley got water samples while I had X Rays.”

Frandle says she learned a lot while paging through the old journals, pointing out one entry in particular about Thanksgiving Day.

‘“Franksgiving!”’ Nordness writes on Nov. 23, 1939. “This date declared Thanksgiving Day by Pres. F.D. Roosevelt in place of the traditional date. The date was accepted by 25 states although many more are planned to celebrate today and the 30th which is the traditional date.” (At the urging of struggling depression-era businesses, Roosevelt moved Thanksgiving one week earlier in 1939 to jumpstart the holiday shopping season.)

“So there’s a little history here,” Frandle says. “It’s great that nobody threw these away over the years so we can see them for what they are now. Just to know they somehow got tucked away and preserved – because some of this stuff you would never think about, and when you read it, it’s kind of touching.”

Nordness would later lead the utility as its superintendent from 1956 to 1961. He passed away in 1967, but his journals remain as a rediscovered link to Madison’s past.

“Imagine in another 100 years what people might think of them,” says Daane. “It’s important not to forget where this utility came from.”