Worst-case: What happens when a water main breaks under an airport taxiway? 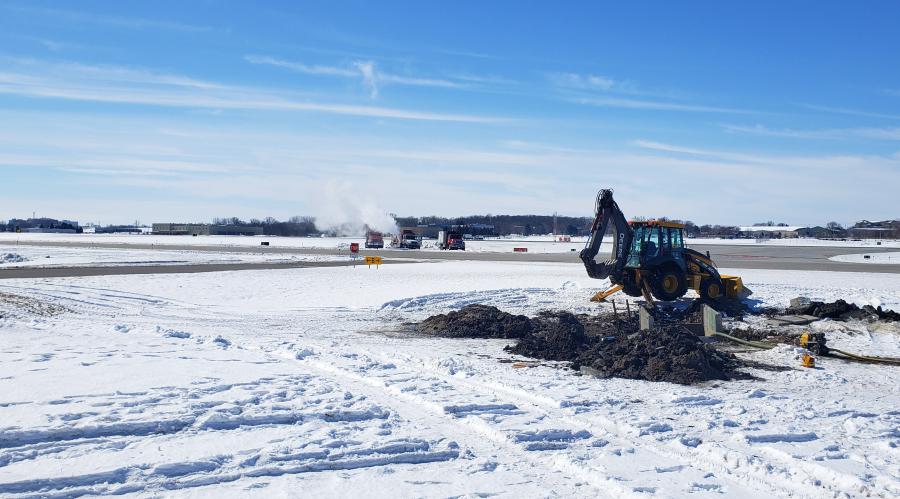 On a cold December day in 2017, Madison Water Utility got a call.

“It was the airport saying, “There’s water bubbling up next to the taxiway,’” recalls Madison Water Utility field supervisor Don Russell. “We sent a crew out there immediately and determined – yep, it was a main break on the 10-inch line that runs diagonally east-west under both taxiways and the main runway.”

Madison Water Utility had installed the pipe in 1942, the same year operation of the airport was transferred to the U.S. Army Air Corps, which would manage the site until the end of World War II. The Corps expanded the airfield and rebuilt four runways, but the water main stayed put – in the worst possible location. More than seven decades later, it finally gave out.

“The break was direct center of the taxiway,” says Russell. 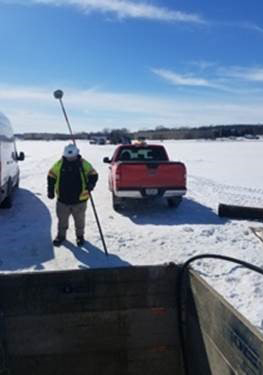 Crews shut the water off, but the utility would need to find a way to fix the break. The water main beneath Dane County Regional Airport could not be abandoned.

As it looked at solutions, Madison Water Utility supplied water to the entire northeastern part of Madison through that single section of main under Commercial Avenue. Getting a second source of water back online was a priority, but it was clear from the beginning that the usual method of repair, which involves digging down to reach the break, was not an option.

“The taxiway itself—the concrete—is about 18 inches thick, which is two to three times the normal thickness of an interstate. And the rock base under it was three to four feet,” he explains. Add to that the potential for major disruptions to both commercial and military air traffic, and an old-fashioned repair or replacement project was out of the question.

Instead, engineers at Madison Water Utility decided to use new cured-in-place pipe (CIPP) technology to fix the break and strengthen the rest of the main that runs beneath the runway and taxiways. The process essentially builds a new, stronger pipe inside the old one and can extend the life of a water main by 80 to 100 years.

“This was a complex project that required an innovative technology to accomplish,” says Kim Jones, Airport Director. “Working closely with Madison Water Utility to prevent a lengthy construction project that would impact our primary runway was imperative.”

Schockling says the technology only requires crews to dig a handful of pits to access parts of the main, which is then lined with a special fabric coated in resin.

“A little machine just drags the liner through the pipe under the runway and taxiways. So they start at one end of the pipe, and they use this machine to drag this liner through as it’s being coated,” says Schockling. The resin is then cured and hardened. “You have to make sure that the liner adheres to the pipe.”

After delays because of heavy rains, the project started in January of 2019. Madison Water Utility crews began digging pits at the airport reach the main and cut open portions for relining, but the work would prove incredibly challenging.

“The groundwater table is very shallow there. Some parts of the project, the water main was 10 feet deep to the top of the main, and we hit groundwater at 8 feet,” Russell recalls. “It’s just a soup sand, it constantly seeps in. With the backhoe we couldn’t excavate quick enough. You take one bucket out and two buckets slide in.” 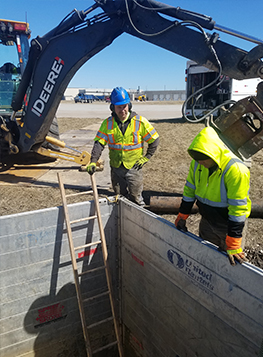 The city had to bring in special vactor trucks to suck the water and sand away from the mains, but that only solved part of the problem.

“Soupy sand would come up from the bottom. So as quickly as we’d get the shoring in, we had to immediately put a foot-thick layer of clear stone rock in the bottom in order to suppress and keep the slop out. So every step was just a challenge,” says Russell.

Madison Water Utility and its relining contractor, Michels, spent months on the project, working through even the coldest stretches of winter. Through it all, the airport remained open, with flights still taking off and landing.

“This new technology and a strong partnership with Madison Water Utility allowed a fix to a major water main without disrupting our main runway,” says Michael Kirchner, Airport Engineer.

“Our goal was to not interrupt their operations at all,” adds Schockling. “This wasn’t an easy project. We’re grateful for the assistance of Dane County Regional Airport staff and their patience as we worked to overcome some major hurdles.”

Fifteen months after the World War II-era main was shut down, Madison Water Utility brought it back online, this time stronger and more durable than ever.

“It was non-typical work, very challenging,” says Russell. “Little by little, we just kept plugging away.”

This content is free for use with credit to the City of Madison - Madison Water Utility and a link back to the original post.
Category: Our People, Serving the Community