Winter bicycling can be fun, with the proper attitude and some thoughtful equipment and clothing choices. The exertion keeps you warm, and being active makes winter more enjoyable. The day of a storm and a day or two after usually are not great for bicycling. Take a break and walk or ride Metro Transit until the roads are cleared for good bicycling conditions.

If you see a bike path that needs to be plowed, or there are sections of the path covered with snow and ice, contact Report a Problem: Bike Concerns.

Making Bicycling a Viable Mode of Transportation Year Round

Madison's bicycle transportation network includes more than 55 miles of shared use paths, 133 miles of streets with bike lanes and 116 miles of signed bicycle routes. Our vision is to make bicycling an integral part of daily life in Madison, thereby making Madison a model for health promotion, environmental sustainability and quality of life.

Proper maintenance of bike lanes and shared use paths is an important consideration in people's decision to bicycle and a key factor in bicycle safety. Our objective is to provide safe, comfortable riding conditions, which promote bicycling as a viable alternative mode of transportation.

Arterial bike paths are plowed as needed after any snow event. When a general plowing is underway the arterial paths will be plowed. The goal is to have these paths clear for commuters as soon as practical on weekdays.

Because we often have to plow major streets three or four times during a given snow event, windrows at the intersections of bike paths and streets are inevitable. We instruct our plow operators to make an effort to minimize the windrows. We also send a plow back on the bike paths once we are finished with our plowing to clear the windrows. Bicyclists should be prepared to encounter windrows at intersections.

Even though most on street bike lanes are on salt routes they are seldom clear during winter. Salt's effectiveness is limited due to its dependency on traffic volume to distribute the salt and stir the snow and ice accumulations to promote the melting action. Given the lack of volume and small tire size of bicycles, few bike lanes will be as clear as the adjacent vehicle lanes.

Our ability to plow on street bike routes to the curb is limited by two factors. The first limitation is that the ASPO does not apply on streets where parking is allowed on only one side. This includes large sections of the E. Gorham and E. Johnson bike lanes as well as sections of Jenifer Street. Due to the large volume of cars parked on these streets we are never able to get to the curb during regular operations.

Another limit to our ability to plow to the curb is compliance with the ASPO. When a car remains parked in violation of the ASPO we must plow around it. This action creates a space of approximately three car lengths where snow remains on the street.

Another cause of snow accumulation along the curb line is significant amounts of snow. During the last 10 years Madison has experienced some of its largest snowfalls on record. This results in large piles of snow on the terraces which eventually end up along the curb line and onto the street.

These circumstances lead to snow accumulating along the curb line and into the parking lane. This forces parked cars further from the curb so they encroach on the bike lane. This gradual narrowing of the on street bike lane forces bicyclists into the traffic lane.

In order to get on street bike lanes as open as possible, our plow operators will make a final pass on all salt route streets as close to the curb as possible. This will maximize the clearance of the bike lanes.

Being visible is your first concern in winter bicycling. There are fewer bicyclists on the road and motorists often do not expect to see bicyclists. Wear bright colors during the day to announce your presence. At night there is no substitute for the best lights you can afford. Reflective strips on clothing, leg bands, vests, etc. also help at night.

Choose your route carefully. The heat from traffic helps clear streets of snow and ice. The places that will be best to ride are where cars are driven, not near the side of the street which will stay icy and snow covered. Try to find streets that have enough traffic to clear the snow and ice, but not so much traffic that you feel uncomfortable riding in the path cleared by the cars.

Preventive maintenance is also important. Having a breakdown in the winter is no fun. The cold, wet and road salt can lead to unexpected problems.

Winter bike set up is a personal choice. While most any bike will do, winter bicyclists generally recommend something along the lines of a hybrid or mountain bike with upright handlebars, thumb or grip-twist shifters, knobby tires (studded tires are popular, too) and low gearing. Accessories include a rack for carrying things, fenders to help keep you and the bike clean, and good lights and reflectors.

Adapting to winter road conditions for bicycling is similar to changes needed for driving a car. On snow covered or icy roads, ride slower, be aware of hazards and know how to react to them.

Two of the biggest concerns for bicyclists in the winter are changing road conditions and changing light conditions through the day. 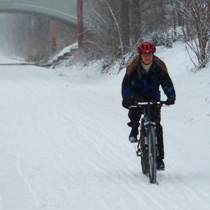 DID YOU KNOW?
Bicycling is the most efficient and non-polluting form of transportation known to humankind.