A lot is happening in the City right now:

The Ad Hoc Redistricting Committee met on Monday evening, and preferred a new option, 7a, which would keep District 5 mostly the same, though add in Ward 82, and remove a small portion of Ward 61. 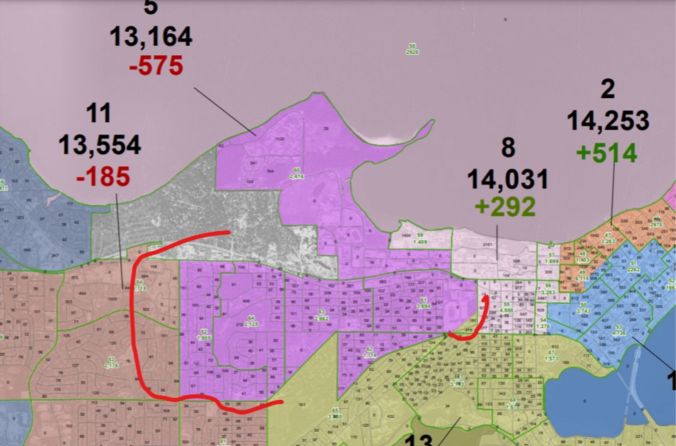 Notably, this option keeps the UW student population predominantly together, which was a really important modification.

The Committee will meet again tomorrow, October 7 at 4pm, to consider some additional modifications to Districts 10, 13, 14, 3 and 17. As always, any modification to one district's boundaries impacts other districts, as there is an effort to keep the populations across districts relatively even. Thus, some additional changes to District 5 could occur.

The Mayor released the Executive Operating Budget yesterday. This is the budget that covers staffing and city services (the Capital Budget covers buildings and major projects). Unlike the Capital Budget, which the City can borrow to pay for, the Operating Budget MUST balance. And this year, that is a complex dance as City revenues are down, yet we have federal stimulus dollars available for certain expenses. I sincerely hope you will take advantage of the multiple opportunities for public comment between now and early November when the final budget is adopted.

There will be a series of meetings on Bus Rapid Transit (BRT) over the next three Thursdays:

Focused Interruption will be hosting a webinar on gun violence reduction on Tuesday, October 19 at 6pm.

The City of Madison's Rehabilitation Loans program is accepting applications. This program provides financial incentives to upgrade eligible housing units in need of rehabilitation, resulting in improved housing stock. To accomplish this goal the City will provide loans to property owners, both owner-occupied and rental properties, with varying loan terms based on eligibility.

October is Breast Cancer Awareness Month, and the perfect time to get screened if you put it off due to the pandemic.

I know many of you may be still reeling from the tragic loss of three of our community's young athletes this weekend. I'm hugging my high schooler a little tighter, and sending even more love across the miles (if that's possible) to my college freshman. My condolences to those who knew the young men.