There is evidence of an attempt to form an organized fire service in Madison dating back to 1838.; Augustus A. Bird and William N. Seymour, both of whom settled in Madison after coming here to build our first capitol, summoned the help of the villagers when there was a fire by running through the town ringing dinner bells and shouting "Fire, fire, turn out!". Citizens and firefighters raced to the fire grabbing buckets along the way and using the fire company's only apparatus, a "bucket rack" used to carry buckets to the fire.

When incorporated as a village in 1846, one of the first ordinances passed concerned fire protection. It required all owners of a building in which fires were kept to have buckets in a convenient place and required that two Fire Wardens be appointed "to give directions and commands to all persons assembled to any fire" and "to cause to be extinguished any fire". However, despite the appropriate concerns and a few pieces of basic equipment acquired over the years, Madison remained unable to band together a group of men to use the equipment.

Though there were many attempts to organize sooner, the beginning of the Madison Fire Department as we know it today dates back to the volunteers of 1856. By the time the village was incorporated as a city on March 4, 1856 the need for an organized fire service was obvious. In his inaugural message, Madison's first Mayor, J.C. Fairchild, proclaimed: "No city has been so providentially exempt from fire in the past as Madison. During the last winter, two fires occurred. A recent fire in the business section of the City illustrates two facts: a want of necessary apparatus and a surprising knowledge and tact on the part of your citizens in subduing fire...This want of apparatus must be supplied, and connected with public cisterns."

The City Charter directed the Council "to authorize formation of fire engine, hook and ladder, and hose companies, and to provide for the due and proper support and regulation of the same...Each company shall not exceed seventy able bodied men, between the ages of fifteen and fifty years, and may elect its own officers and form its own by-laws". To encourage an ample supply of volunteers, the Charter exempted firefighters "from highway work, poll tax, from serving on juries, and from military duty during the continuance of such memberships". The Charter also provided for organization of a Sack Company and appointed by the volunteers of four Fire Wardens, one for each Ward, who would have authority to access any building for the purpose of inspection to guard against fire.

The first two fire engine houses were completed in the Spring of 1857. One site was on Block 102 facing Webster and the other on Block 75 facing State Street. The cost of the two houses, including lots, totaled $4,600.

On April 2, 1857, fire companies were notified that the first two engines had arrived. The engines were manufactured by Wm. Jeffers & Co. Madison celebrated the long awaited arrival of their first two fire engines with a parade, including a band, after which the crowd assembled to witness the testing of the hand pumpers at Lake Monona.

As of April 10, 1856, William H. Holt had organized a group of volunteers to fight fires in Madison. Members of Holt's newly organized Challenge Engine Company No. 1 were "Americans" (mostly 4th Ward Irishmen). The name was soon changed to Mendota Engine Company No. 1. Their first uniforms consisted a red flannel jacket with a blue collar and hemmed with white braid. A black belt, black pants and a red and white hat completed the outfit.

Madison Fire Company No. 2 was organized June 23, 1856 by prominent German residents. In addition to its firefighting duties, it served as a business and social group. Its constitution was adopted July 30, 1856 and signed by 61 members.

Volunteers were paid $12 per annum to cover expenses related to their services.

On September 30, 1857, Hook and Ladder Company No.1 was organized with over 20 members on record. In 1858 it became known as the Capital Hook and Ladder Company No. 1. Until 1885, the company was independent from MFD and purchased their own equipment, paying $685 for the first hook and ladder truck which arrived in April, 1858. Built by James Smith of New York, the truck was at the time one of the longest in the country measuring 50 feet from tongue to tiller. It carried five ladders, the longest being 48 feet in length. At least four volunteers were needed to push the truck to a fire. In 1891, a new horse drawn truck was purchased, at a cost of $2,400, for the hook and ladder company and placed in service at the No. 1 engine house. As of October 9, 1891, the Company's name was changed to Wm. H. Rogers Hook & Ladder Co. No. 1.

On January 18, 1858, Sack Company No. 1 was organized to act as a special police force at the scene of a fire to keep crowds under control, protect against looting and try to preserve goods from fire and water damage. The name of the company was derived from their principal piece of equipment, a sack.

Comprised mostly of members from Madison Fire Company 2, the E.W. Keyes Steam Engine Company No. 1 was organized on November 14, 1866. This was followed in December of 1866 with the arrival of Madison's first steam engine, also named after the Mayor of Madison, E.W. Keyes. A second steam pumper was purchased for the Andrew Proudfit Engine Company No. 2 (previously Madison No. 2) in 1870. 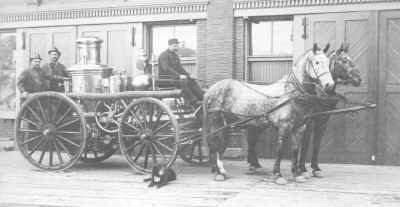 Andrew Proudfit Engine Company No. 2's steamer engine is shown in front of Central Fire Station at 10 South Webster Street (picture taken after 1881). The ornate lantern shown here on the steamer is among the items in the collection of the State Historical Society of Wisconsin.

As of 1880, water for fire suppression was obtained from any of fifteen tanks located in different parts of the city or three large railroad water tanks. The City's water supply totaled 11,800 barrels. In 1882, a waterworks costing $36,000 was installed in the City. A steam powered engine provided pressure to the water mains. Just as the steam engine companies had displaced the hand engine companies some years before, "hose companies", using the new waterworks, became the dominate force within the department.

The End of Volunteers

On July 1, 1901 the department took a giant stride towards a professional rank when it was reorganized and hired 16 full-time firefighters. Charles Bernard, who had led the volunteer force for 11 years, was appointed the Madison Fire Department's first full-time Chief Engineer and John Engelberger, Jr. was named his assistant. During this period, volunteers were still used to support the fire department. In 1907, Charles Heyl succeeded Bernard as Chief Engineer. Soon after taking office, Heyl convinced the City Council that a fully paid Department would provide the City with better protection. On July 1, 1908, Madison had its first fully paid Fire Department. Firefighters worked six 24-hour shifts with one day off per week and three hours off for meals per day. By the end of the year, personnel included one Chief Engineer, one Assistant Chief, one Electrician, and 24 full-paid men. Payroll for the entire year totaled $21,783.