Shon F. Barnes was hired as Madison Police Department's Chief of Police by the Police and Fire Commission (PFC) in February of 2021. Chief Barnes is a nationally recognized leader in crime reduction and community-police relations. He was previously the Director of Training and Professional Development for the Civilian Office of Police Accountability in Chicago, Illinois. Chief Barnes was the Deputy Chief of Police in Salisbury, North Carolina (2017-2020) and a Captain with the Greensboro Police Department (NC) where he began his career as a patrol officer in the fall of 2000. Chief Barnes was honored as a National Institute of Justice, LEADS Scholar, for using innovative technology to reduce crime and is a council member on the National Police Foundation's Council on Policing Reforms and Race. The council is a nonpartisan initiative which uses research and evidence to consider and offer recommendations to resolve some of the most pressing issues regarding police reform. Throughout his career Chief Barnes has implemented Neighborhood Oriented Policing which focuses on smaller police beat response, police neighborhood ownership, and community engagement at levels within the organization.

Chief Barnes is married to Dr. Stephanie Dance-Barnes and the two have three children Ashlee, Aeiden, and Addison. My philosophy as it relates to policing simply states, "Community Policing should be neighborhood oriented, community focused (business and residential), problem oriented, and based on the most current empirical research available to quickly reduce crime and improve citizens' satisfaction with police services." 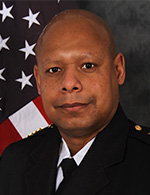