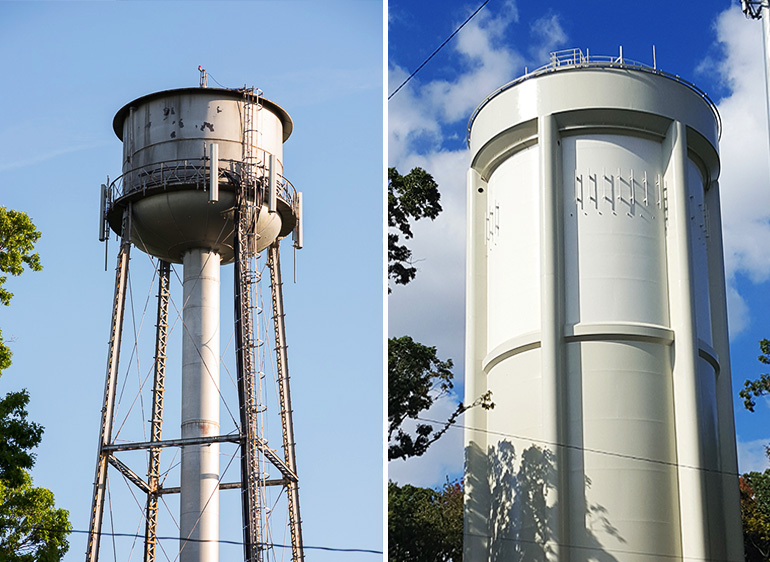 This project has been completed. Thanks to everyone for their patience during construction of the tower and upgrades to the nearby water main system.

Built in 1938 to supply water to Lake View Sanatorium, Lake View Reservoir (1320 Lake View Avenue) now provides water storage and fire protection for a large portion of the Lake View Hill Neighborhood. Because the reservoir is undersized and has reached the end of its useful life, MWU will construct a larger reservoir and use the site to improve water storage for the remainder of the city’s north side, ensuring better fire protection for the entire area. You can find more information on the history of Lake View Reservoir and the park that surrounds it on our Inside MWU page. Cost of water tower construction: $5.2 million. Cost of upgrading nearby water mains and booster pump station: $2 million.

Work has been completed on three projects to upgrade water mains near the new Lake View Reservoir.

Lake View Reservoir is finished, it is filled with water, and it is fully operational and providing reliable water supply service to the north side. City Radio has moved its equipment off of the monopole and onto the new reservoir. Sprint and AT&T have installed new antennas on the tower and are fully operational. Verizon should have its equipment moved to the tower by the end of March. At that time, the monopole will be removed.

Madison Water Utility is soliciting bids for landscaping and restoring the area. This work will involve planting 14 trees and 21 shrubs, installing and planting 4 rain gardens, and seeding the disturbed area. This work will provide improved storm water management and help restore the park to its original condition. The landscaping work will begin in late April and be completed by June 1st.

In the early summer months, Madison Water Utility will be replacing the 8" water main from Northport Drive that fills the reservoir and feeds the pump station with a more appropriately sized 16" pipe. A new connection from the new reservoir to Esch Lane will also be constructed to improve reliability and fire protection capacity to the area north of the reservoir. All of this work will improve the water system and support a reliable drinking water supply to the north side.

You can find more information on the water main projects here.

We appreciate your patience and understanding throughout this major construction project as we update and improve our water supply infrastructure. 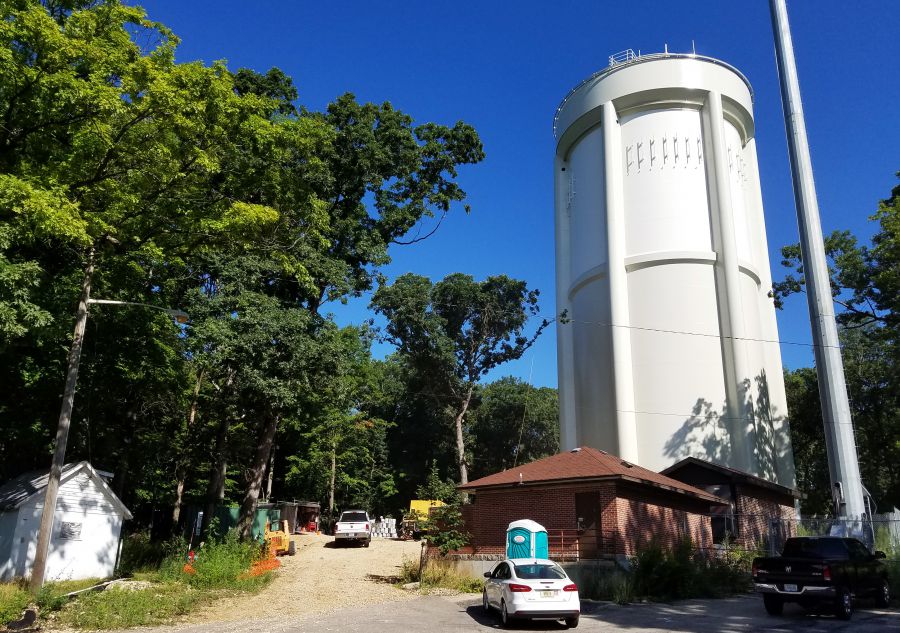 Interested in following the project or giving feedback? Sign up for Lake View Reservoir Reconstruction updates by entering your email address in the box on the right side of this page.

Once you're on the project email list, you'll be notified about upcoming public meetings and get meeting notes, planning documents, design drawings, online surveys and photos. You'll also be able to ask questions and give input at every step along the way. Learn more about our Citizen Advisory Process

Why is the project needed?

The existing reservoir is too small and has reached the end of its useful life. The area requires 300,000 gallons of water storage for emergency and fire fighting reserves. Additionally, our Master Plan identified a need for an additional one million gallons of water storage on the north side for system reliability and fire protection. The proposed project could satisfy both of these needs in a single project at the existing site.

Will the new tank be the same size and height?

The proposed new tank (see below, click to enlarge) will be the same height as the existing tank but it will be larger. The current reservoir is undersized at 55,000 gallons and does not meet current water storage and fire protection standards. 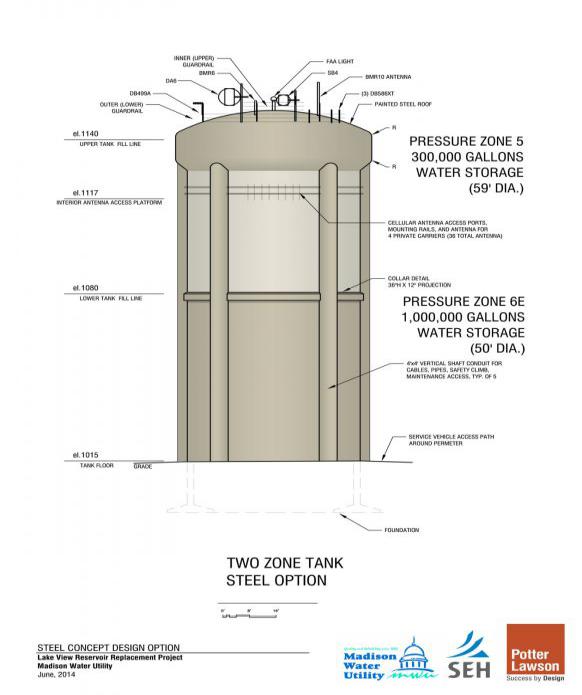 What area does the reservoir serve?

The existing reservoir serves Pressure Zone 5, approximately 190 homes and a portion of the Dane County facility. A map of the service area is included below: 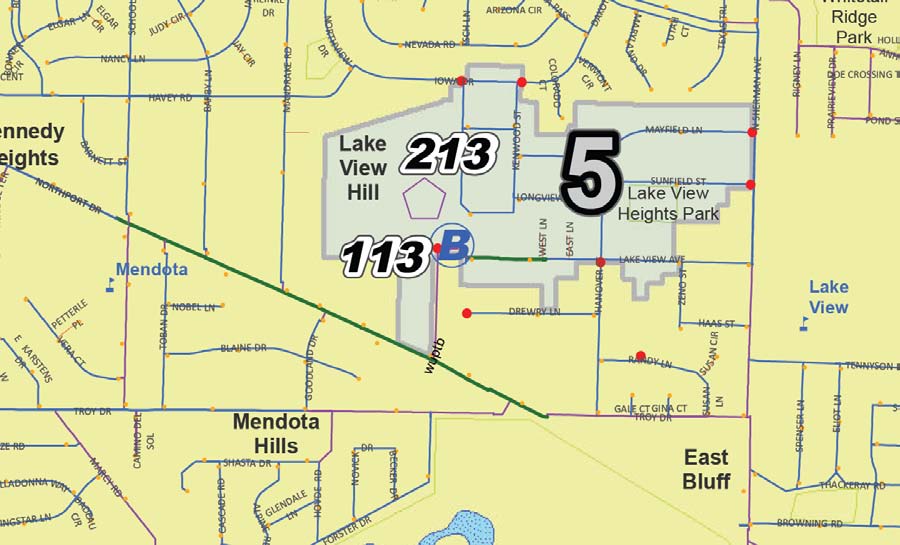 The proposed two zone reservoir would serve Zone 5 and also the surrounding area, which is part of Pressure Zone 6E.

What is the project’s anticipated schedule?

The tank design and landscape plan were approved by the Urban Design Commission and reviewed by the Board of Public Works. Construction is expected to take place in 2015, and the tank will be painted in the summer of 2016.

How much will this project cost?

Due to the complex nature of the design, Madison Water Utility only received a single bid on construction. On October 28, 2014 the Water Utility Board passed a recommendation awarding the project as bid at $5.2 million.

In addition to construction costs, $2 million has been budgeted for upgrades to the water mains that serve the immediate area and booster station improvements.

Will there be antennas on the new tower?

Due to the elevation of the site, this location is particularly attractive to cell companies. The cell carrier lease payments are shared 50/50 between Dane County and the City of Madison. Dane County allocates the money for park care and maintenance projects. Federal regulations require that Madison Water Utility cooperate with cell carriers interested in mounting equipment on our water towers.

The City of Madison also has its own telecommunication equipment located here, including antennas that transmit emergency 911 calls.

February 2015
The construction contract with Landmark Structures, Inc. was approved by the Board of Public Works and the Common Council in February 2015.

Because the height of the existing tower exceeds current airport height limitations and zoning restrictions, constructing a new tank requires variances. The Federal Aviation Administration (FAA) ruled the project was not a hazard to navigation in December 2014. The Dane County Board of Adjustments granted a variance on the airport height limitation at their January 22, 2015 meeting.

The tank design and landscape plan were approved by the Urban Design Commission and reviewed by the Board of Public Works. Because of the complex nature of the design, only one bid was received for the construction, which came in above the Engineer’s estimate of $4.5 million for construction. On October 28, 2014 the Water Utility Board passed a recommendation to award the project as bid at $5.2 million.

January 28, 2014 - Public Hearing before the Water Utility Board

Board members voted unanimously to move forward with the design of a two-zone reservoir concept (below). The Board directed the Utility to include Cor-ten steel as an option in the bidding (Cor-ten steel develops a rust-like coating when exposed to the elements and could eliminate the need for painting the water tower).