Pinney Library's move is in progress 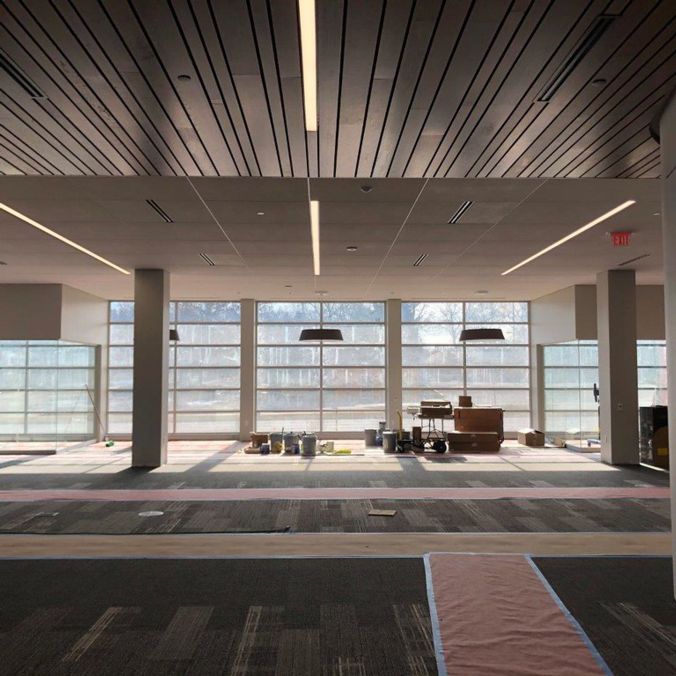 Pinney Library's interim space at 211 Cottage Grove Road closed to the public last week. The library will remain closed during the move to the new library on 516 Cottage Grove Road, and reopen on Thursday, March 12 at 11 am. Read the full press release about the closure and the new library or check out the Engineering Department's project page for more information about the space.

What you need to know about library services during the close.

Artwork and activities in store for the new Pinney Library

A few examples include a hand-embroidered Wisconsin prairie by Yeonhee Cheong and a vibrant outdoor sculptural mural by Michael Velliquette.

Titled Pair of Perches for Pinney People Pondering, the seating area was constructed from local ash and birch plywood, with spun cherry legs and paint. The project was funded with a $12,000 grant from Madison Community Foundation that was secured by Madison Public Library Foundation. It's an offshoot of the Madison Community Foundation-funded Phoenix from the Ashes project, a larger partnership involving Madison Parks Department, Madison Arts Commission and Wisconsin Urban Wood to to reclaim ash trees infested by the emerald ash borer. 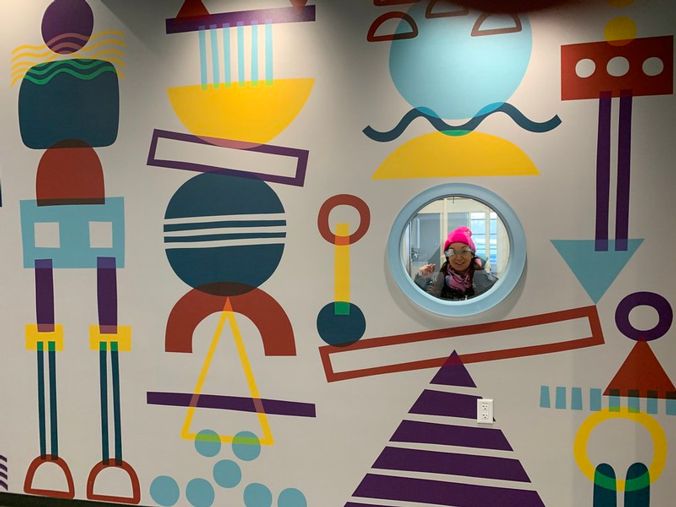 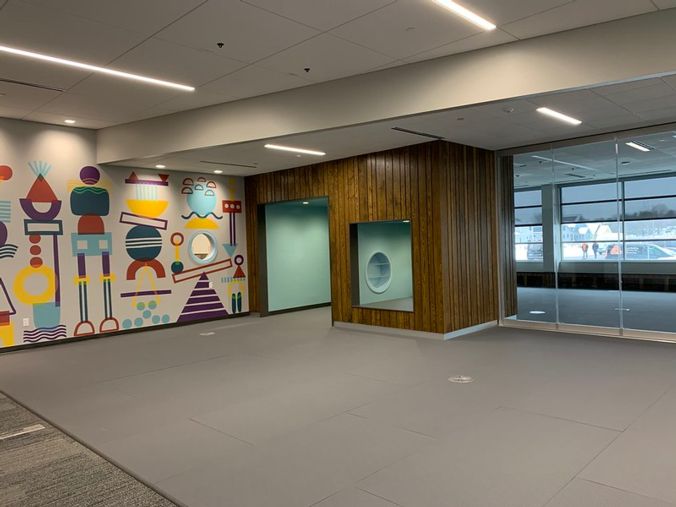 The PlayLab at Pinney Library promotes early literacy through child-directed play for children ages birth to 5. PlayLab programming will encourage community support and family literacy with a variety of programs featuring music, play and great books.

Library staff have been working on continuing family engagement sessions and partnership meetings with various east side community organizations. At a recent family engagement session with Madison Metropolitan School District's Darbo Play & Learn, families learned about the PlayLab and had an opportunity to play with some of the materials that will be available in the space. Read more >

Black History Month at the Madison Public Libraries includes a series of events focused on Black history in Madison and a display of UMOJA magazine covers at the Goodman South Madison Library throughout this month.

Check out the complete list of activities and learn how to participate.

Twisted Grounds, a cafe planning to open in April 2020 at 6067 Gemini Drive, has applied for an alcohol license that would allow them to serve beer and wine.

You are invited to attend an informational session about their alcohol license application on Thursday, March 5, at 6067 Gemini Drive.

If you are unable to attend, you can email me with your thoughts and input or consider attending the March 18 Alcohol Licensing Review Committee meeting where they will consider Twisted Grounds' application.

Postcards will be mailed to residents in the coming days about the prescribed burn. The Dane County Emergency Management automated phone call system will be used to notify relevant neighbors on mornings when we will be burning.

These burns will be conducted by certified professionals with a permit from the Madison Fire Department. The burns will only take place under specific weather conditions in order to manage smoke and minimize impacts to neighbors. In addition, the burn professionals will install appropriate road signage on the day of the burn.

Further details can be found on the 2020 Prescribed Burns website.

On Wednesday, March 11, Metro Transit and the City of Madison Transportation Commission will hold a public hearing at 6 pm to discuss potential service updates proposed to go into effect in August.

Staff propose shifting service from Acewood Blvd., where there is low ridership, to Dempsey Rd. between Milwaukee and Cottage Grove Rd. 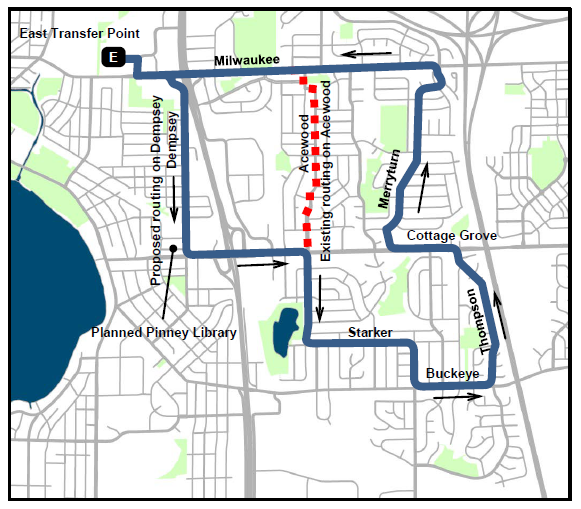 The census is a count of all people living in the United States mandated by the constitution to occur every ten years. Distribution of $675 billion of annual federal funding is tied to data gathered in the census.  That means that every person not counted could lead to a loss of $2,000 per year for critical services and infrastructure. Madison needs a complete and accurate count of everyone living in the city in order to receive our fair share of federal funding. Responses to the census are confidential, and the questionnaire will not ask about citizenship or immigration status. Find out more at 2020census.gov or cityofmadison.com/2020Census.

One of the critical parts of ensuring a complete count in the Madison area is having enough Census Bureau workers and having those workers be representative of the community where they are working.  Carrying out the 2020 Census is a massive undertaking – 500,000 people must be hired nationwide. The tight labor market in Madison and Dane County has meant that the Census Bureau has lagged here – only about 46% of the needed workers have been hired.  These temporary part- or full-time jobs start at $22/hour, with flexible hours and paid training. Anyone who's 18 or older and has documentation to work in the United States can apply at 2020census.gov/jobs.

I've been informed that the blasting at the future Kwik Trip site at Cottage Grove Road and Sprecher Road has been completed as of Friday, February 21. If this changes I will let everyone know via my blog.

Common question: Why not have weekly recycling pickups?

I receive the question every so often: why not have weekly recycling and biweekly garbage pickups? I discussed this with the City's Recycling Coordinator, Bryan Johnson, and learned this isn't something Madison is able to do right now because it would require a great deal more resources and produce a very small return.

In the waste industry, everything is tracked by the weights of the items picked up, and by weight is how the city pays to dispose and recycle the items collected.

The study found that communities that have weekly recycling only saw a marginal increase in the weight of material they collect.

At four pounds per year per household served, the Streets Division's recycling collection weights could potentially increase by 150 tons at the end of the year.

In other words, weekly recycling could potentially generate an additional 12.5 tons a month.

Right now, they collect around 1,500 tons of recycling a month.

To go to weekly recycling, existing service would need to be doubled, but with little gained.

Additionally, the city would need to continue collecting trash weekly even if they moved to weekly recycling. Just switching would mean more trash would end up in the recycling, and that is the last thing they want for the recycling program.

Instead of going that route, here are a few different ways to increase your recycling capacity:

Over the past three years, Madison and surrounding areas have experienced a large number of extreme storm events. When the stormwater system is overloaded with too much storm or rainwater, either in heavy rainstorms or multiple heavy rainstorms in a short amount of time, flooding happens.

Madison ordinances include requirements for water quality, water quantity and erosion control design standards for anyone who wants to build in the City of Madison. City engineers reviewed the current ordinance and standards. Based on the recent heavier rainfall the area is experiencing, City engineers updated the standards to support expected larger and more intense rain storms.

The proposed changes have been posted and are ready for review and feedback. A series of public meetings are scheduled to take feedback on the proposed changes. Meeting details and contact info here. Emailed comments should be sent to engineer@cityofmadison.com by April 10, 2020.