Included below is an overview and key information for city government, the Common Council, and Boards, Commissions and Committees. 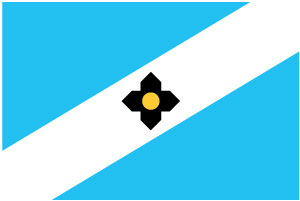 The Madison, Wisconsin flag consists of a light blue background bisected from lower left to upper right by a white band. These symbolize Lake Mendota and Lake Monona and the isthmus between them. In the center of the flag is a black cross that symbolizes the four lakes (Mendota, Monona, Wingra and Waubesa) as well as the State Capitol. The gold circle symbolizes the dome of the State Capitol.

The original flag was designed by Rick and Dennis Stone, members of the Madison Scouts Drum & Bugle Corps, with the help of John Price, their color guard instructor. It was adopted by the municipal government on April 12, 1962. In 2018, the flag was modified by removing the sun symbol of the Zia Pueblo people and replacing it with a gold circle. The redesigned flag was adopted as the Official Madison City Flag by the Common Council on July 24, 2018.

Use the directory below to access information for each agency (Department/Division) in the City, including mission statement, agency contacts, and links to each agency webpage.