Madison has five vibrant local historic districts, with unique places and important stories to tell. They are a part of what defines the cityscape of Madison. In order to preserve the physical character of these places and allow them to evolve in a way that they are still able to convey their history, the Madison Landmarks Commission reviews and approves the exterior changes proposed in the districts.

The Historic Preservation Ordinance has a separate set of standards for work proposed in the districts, divided up by the level of intervention: maintenance, repair, alteration, addition, and new construction. The standards for maintenance provide helpful information for property owners about how to care for our historic places, but this work does not typically require an approval from the Landmarks Commission. The rest of the standards provide the framework for how repairs and changes in our districts can take place.

For more information on the historic resources and stories of our districts, please see the information below: 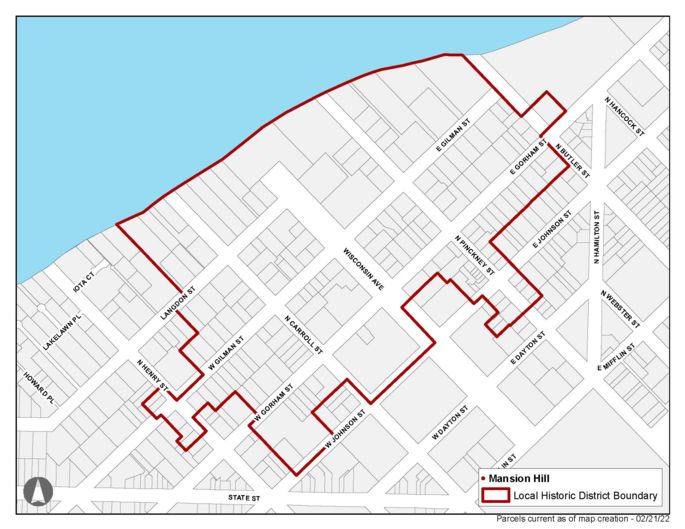 Mansion Hill is the residential neighborhood north of the Square in downtown Madison. Its heart is the corner of Gilman and Pinckney Streets, where four Victorian mansions evoke an aura of yesteryear. In the 19th century, Mansion Hill was one of Madison's two most prestigious neighborhoods (the other, along East and West Wilson Street, has been mostly obliterated by time). Mansion Hill contains the greatest concentration of intact Victorian houses remaining in Madison, many of which were the homes of Madison's pioneer movers-and-shakers.

In the 1950s, '60s and '70s several of the finest old houses in Mansion Hill were demolished to make way for anonymous apartment buildings and two large insurance companies. Fearful of further erosion of the residential character of this historic neighborhood, residents petitioned the City to designate Mansion Hill as an historic district. The Common Council complied and Mansion Hill became Madison's first historic district in 1976. 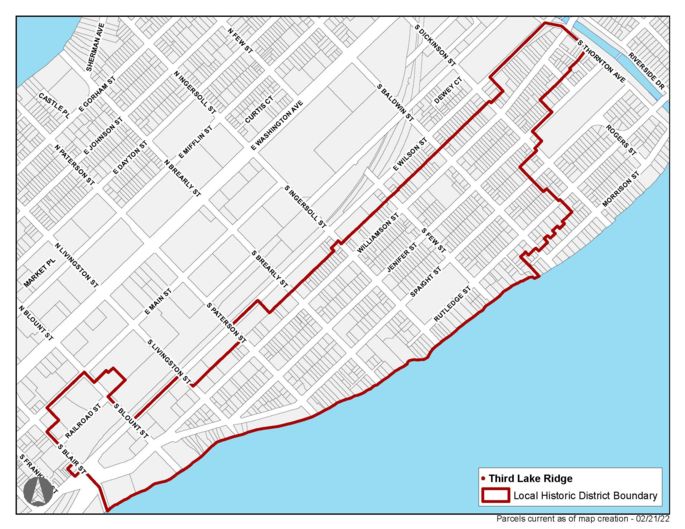 The Third Lake Ridge historic district encompasses the oldest sections of the Marquette neighborhood. It extends roughly from Blair Street to the Yahara River and from Williamson Street to Lake Monona. It is an area noted for its variety of building types, including churches, a tobacco warehouse, corner groceries, tiny cottages, imposing mansions and a railroad depot. It was a place where a diversity of people - Germans, Norwegians, and Yankees - lived, worked and shopped. The historic district designation came about as part of a multi-faceted revitalization campaign undertaken by the Marquette Neighborhood Association, which included such things as beautification, economic development, zoning studies and traffic redirection. The Third Lake Ridge was designated Madison's second historic district in 1979. 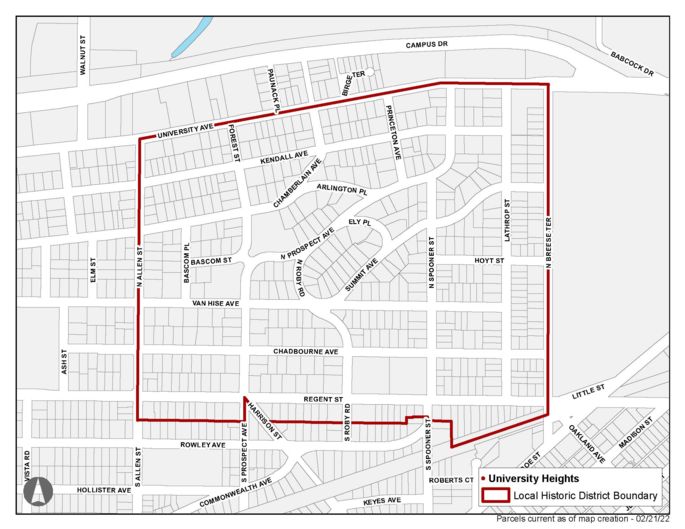 One of Madison's first suburbs, University Heights was platted in 1893. Located close to the University, its curvilinear streets and beautiful vistas attracted families of university professors and other business people. Some of Madison's most architecturally significant Queen Anne, prairie style and period revival houses were built here. Madison's finest architects, as well as nationally-known architects Keck and Keck, George W. Maher, Louis Sullivan and Frank Lloyd Wright, designed residences in the Heights.

The Common Council designated University Heights as Madison's third historic district in 1985 at the request of neighborhood residents. 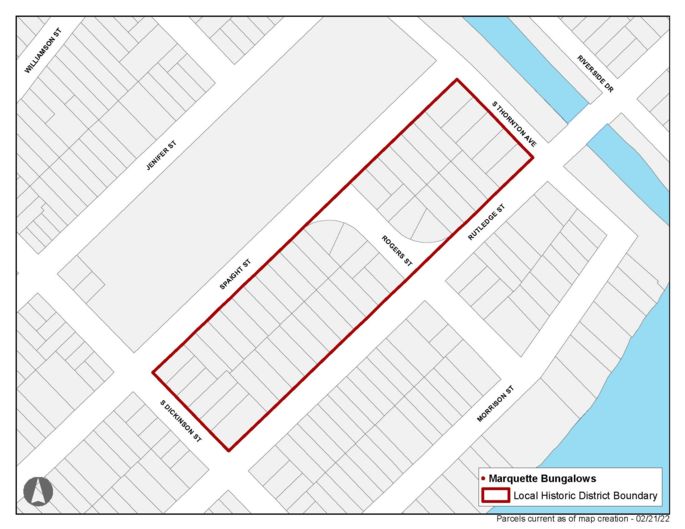 The Marquette Bungalows is a cohesive grouping of bungalow houses on two blocks just south of the O'Keefe/Marquette School complex.  The boundaries are Spaight Street on the north and Rutledge Street on the south,  S. Dickinson Street on the west and S. Thornton Avenue on the east.  In 1924 the Karrels Realty and Building Development Company platted the blocks as the Soelch's Subdivision.  In that year, they built five homes on the lots and continued to build several houses each year until 1930, when the last of the 47 houses was completed.  The bungalows share similar sizes and shapes, with a myriad of different details to distinguish each house.  Although the houses were not large, the quality of construction and detailing were high; many of the houses had wood floors, fine woodwork, built-in cabinetry and leaded glass windows.  At the request of neighborhood residents, the Marquette Bungalows were designated as an historic district in 1993. 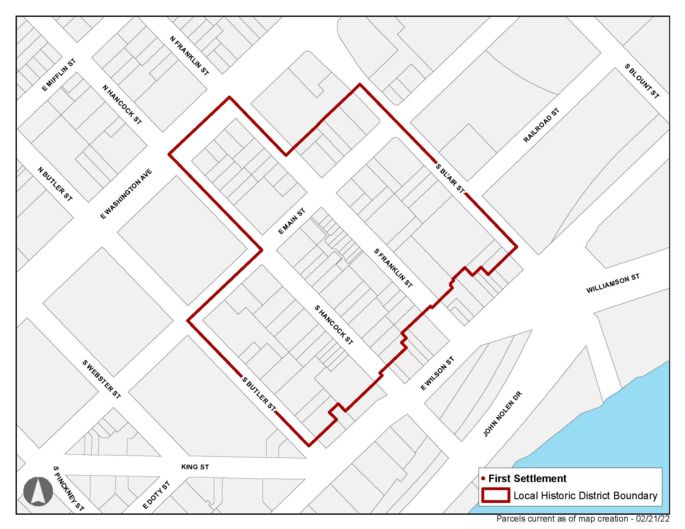 The First Settlement neighborhood just southeast of the square was the home of Madison's first residential settlement.  In 1837 Eben and Rosalie Peck built a boarding house on South Butler Street to house workers who would build the first state capitol here.  Their log cabin was the first occupied residence in Madison.  As the nineteenth century progressed, more modest frame houses were built in the area, with finer brick residences sprinkled throughout.  The neighborhood remained fairly stable  until after World War II when development of the downtown began to encroach on the area.  The construction of the GEF buildings for state government severely impinged on the desirability of the area, which was marked in city plans of the 1960s and 1970s for complete redevelopment.  In the late 1970s, though, pioneer downtowners began to move back to the area and restore the simple houses of a bygone era.  In 2002 residents succeeded in having the Common Council designate the area as Madison's fifth historic district.