Judge Doyle Garage in the News

On Monday, October 30th, the entire 200 block of South Pinckney Street will close until the completion of the Judge Doyle Square project in 2021. Drivers parking at the Government East Parking Garage will need to use the East Wilson Street entrance/exit. A walkway along South Pinckney will remain open at all times.

The full closure of the 200 block of South Pinckney Street is needed in order to build the new parking garage, which will extend under the street. 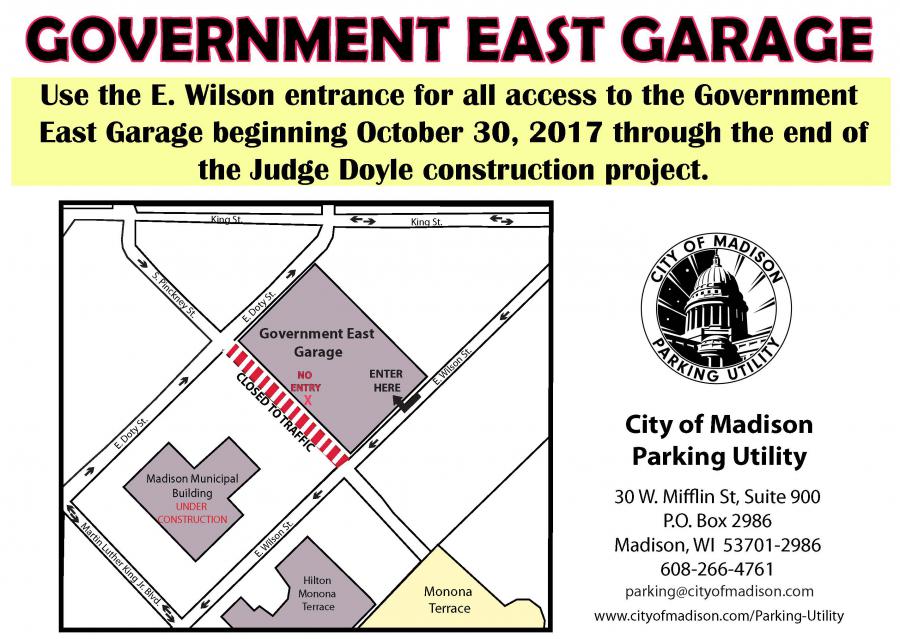 This map of the street closure can also be found at this link.

Judge Doyle Garage in the News

November 14, 2019 Addendum to Q3 2019 Report
Addendum to Third Quarter Report to the Mayor and Members of the Madison Common Council

As of the end of the fourth quarter of 2018, the Judge Doyle Garage construction continues to make considerable progress, reaching the 60% completion milestone, remaining on schedule to be completed with the certificate of occupancy issued by the end of August 2019. To coordinate the completion of the municipal garage, as well as the new Podium element above, construction activities have been grouped in the existing contract and the new Podium contract to achieve the most efficient combined project. The Podium portion of this project is currently out for bid and can be found at this link.

E. Wilson St has now been restored to two lane traffic. S. Pinckney St will remained closed for the duration of the project. Drivers parking at the Government East Parking Garage will need to use the East Wilson Street entrance/exit. The Level U4 underground plumbing, subgrade preparation, and waterproofing are continuing and the concrete slab on grade has started. The Level U3 structural deck framing has started. The occupancy of the new parking ramp is targeted for August 2019.

April 09, 2018 Q1 2018 Engineering update:
Excavation of the site has reached the bottom at approximately 60 feet deep and concrete forming is currently in progress. Doty St. is scheduled to be closed from April 18-22 for the tower crane setup. Doty St. will remain open with two way access, from Martin Luther King Jr Blvd to the entrance of the Block 89 Ramp.

October 31, 2017  Ground Breaking Ceremony
The 10:00 a.m. groundbreaking ceremony will take place on Block 88 at the site of the project behind the Madison Municipal Building.

May 2, 2017  File #39493
Approving a Certified Survey Map of properties owned by the City of Madison and City of Madison Parking Utility located at 215 Martin Luther King, Jr. Boulevard and 215 S. Pinckney Street

March 21, 2017 File #46425
Amending the 2017 Capital Budget to Increase by $6 million the Funding Authorization for the Judge Doyle Public Parking Garage Project on Block 88.

November 1, 2016  File #44813
Approving the issuance of a Request for Proposals (RFP) to solicit an operator for the Bicycle Center in the public parking facility on Block 88 as a component of the Judge Doyle project

September 20, 2016  File #44295
Contract with AVA Civic Enterprises, Inc. for Project Director Services for the Judge Doyle Project and as Sole Source to act as City Agent for the Development of Judge Doyle project.

April 19, 2016  File #42435
Approving the Selection of a Judge Doyle Square Development Team With Which to Commence Negotiations and Directing Further Actions