July 2020 Update:
Following the July public meeting, several discussions were had with Parks Commission members, residents, and Parks staff, which resulted in plan modifications to the Spring Harbor Outfall Repair project.  The plan alterations are highlighted below.  Sally Swenson, the Project Engineer, will be accepting comments on these modifications, so please contact her with any concerns or questions. 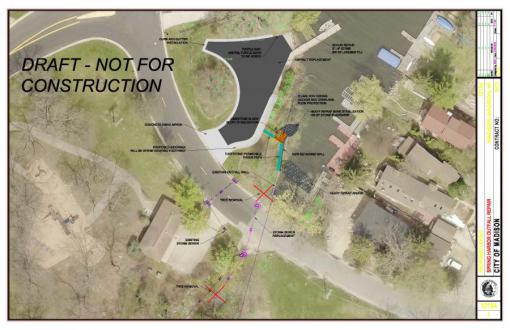 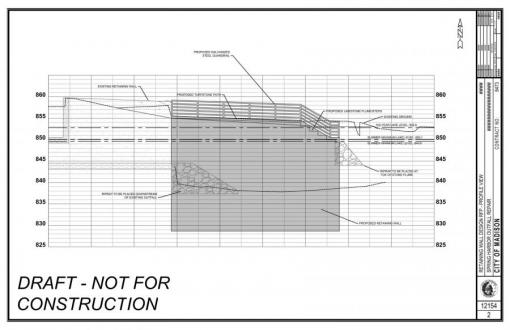 The August 20, 2018 rain event caused the concrete storm sewer outfall structure at Spring Harbor to fail. The heavy rain and high volume of stormwater runoff caused scour beneath the existing retaining wall. The scour was significant enough to undercut and destabilize a portion of the wall, which lead to its rotation and ultimate failure. As an emergency repair, the City placed temporary sheet piling and riprap to secure the embankment.  This project will construct a permanent repair for the failed wall.  Additionally, the project will resurface the boat launch area and replace a failed storm sewer pipe beneath Lake Mendota Drive.  Each item is discussed below.

The proposed project will repair the failed section of retaining wall by replacing it with a concrete-faced sheet piling wall.  The concrete facing will allow the new wall to blend with the existing section of box culvert, while creating a wall that is not susceptible to being undermined by scour.  However, instead of extending the concrete wall 3-4 feet above the adjacent ground surface, the new section of wall will be topped with a tubular steel railing, which will provide fall protection, but will create less of a visual barrier.

The asphalt boat launch is in poor shape due to age.  It is unlikely that the existing surface would hold up well under construction activities.  Therefore, this project will remove and replace the existing asphalt surface.  Curb and gutter will be constructed on the north and west sides of the launch area.  On the eastern edge, a new section of sidewalk will tie into the existing sidewalk.Finally, a pipe that connects the spring area, south of Lake Mendota Drive, to Lake Mendota and Spring Harbor failed.  This pipe will be replaced as part of this project.