Station 12 on the city's far-west side began operations at 400 South Point Road in August 2009, filling a significant gap in emergency response.

The station's Community Room is named in memory of Dr. Darren Bean, the Department's former Medical Director. Dr. Bean died in a Med Flight crash in May 2008. A memorial plaque for Dr. Bean is showcased in the Community Room.

In 2018, the firefighters of Station 12 designed and developed a trail system that cuts into the City property south of the fire station. The trails are enjoyed by neighbors, especially dog walkers, and also doubles as a wildland live burn training site for the crews.

Station 12 was built to meet specifications for Leadership in Energy & Environmental Design. LEED is an internationally-recognized green building certification system providing third-party verification that a building or community was designed and built using strategies aimed at improving performance across all the metrics that matter most: 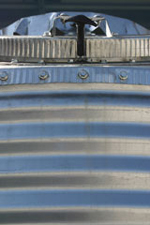