Station 7 is located on Madison's west side. It is staffed daily with eight firefighters and two firefighter/paramedics who work 24-hour shifts.

Station 7 houses Engine Company 7, Ladder Company 7, and Medic 7. The firehouse was built in 1997 to accommodate Madison's development to the west and replaced the older firehouse located on Raymond Road.

Station 7 added the City's eighth ambulance in April 2010 and became a double company when it added Ladder 7 in November of that year.

Station 7 also houses one of the State of Wisconsin's Regional Hazmat Response Teams. Firefighters based at Station 7 are highly-trained Hazardous Materials Technicians who will respond throughout the State to aide in chemical spill mitigation and containment. All members are also trained in Weapons of Mass Destruction response.

HIT 7 is paired with HIT 12, which is stored at Station 12. HIT 7 is staffed with the firefighters from Station 7. 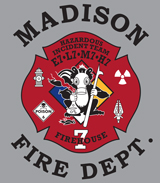 Many stations develop a specific identity over time and develop station logos that members of the crew display with pride. The crew at Station 7 has chosen a whimsical representation of their HAZMAT activities in the form of a masked skunk.

The skunk relates to the noxious fumes and "smelly" chemicals the crew deals with, though they are quick to remind everyone that if you are close enough to smell the product, you are too close and in the "hot" zone.