Seems like the number one question people in the North District are asking this week is, "who won the Chili Cook-off?" They are referring of course to the second annual Great Chili Cook-off sponsored by our friends at the East Madison Community Center. Held in support of Nutrition Education Month, ten of Madison's best chili chefs fed nearly 90 people. Besides great food, our guests enjoyed musical entertainment, a presentation by MPD's C.O.R.E. Team and terrific door prizes.

So who won? For the second year in a row, the Teachers of Hawthorne took home the coveted trophy. It's probably because they cooked up some great chili, but we suspect they may have been helped by the fact the bulk of the voters were their students! Coming in a close second was Sheray Wallace followed by Quentin Sears, Officers Dex and Alex. Although our officers were not the overall champs, we can happily report that the MPD reps managed to finish well ahead of Station Eight.  The MFD may have our number in hockey, but when it comes to chili, the cops are tops.

The real winners?  Everyone who turned out for a terrific evening meeting neighbors, sharing wonderful food and enjoying the company of friends and family.  We look forward to next year. 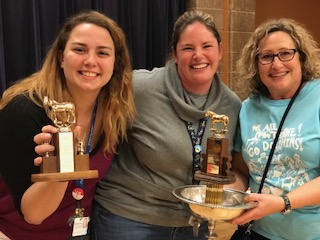