In general, sump pump discharges are a challenge for any homeowner to deal with, and the response may involve both City Building Inspection and Engineering. Each circumstance may require a different response. Below is a list of general information and frequently asked questions about sump pumps and discharges:

What is a sump pump?

A sump pump is a system used to collect and remove water that has accumulated in a under or adjacent to a basement floor and discharge it to the surface area outside the affected home.  This system commonly consists of perimeter drains (under the basement floor) that are directed to a sump pump crock (pit) that contains a pump that lifts the water out from below the floor and discharges it to the surface outside of the home.

Sump pumps are normally hard-wired into a home's electrical system, but may include a battery backup for operation during a power outage.

What is sump pump discharge?

A sump pump discharge is the point where the water has been lifted from the crock/pit in the basement floor is released to the ground outside the home. Discharges are often made to grass areas that slope away from the home, to the driveway, or to the storm system directly.  Discharge to the sanitary sewer system (floor drains in the basement) is not allowed.

Where should sump pumps be discharged?

Most new homes have sump pumps, many of which never or exceedingly rarely operate. In those cases, the builder will typically discharge to a point on the property that has grade away from the foundation, and it is never a problem.  For pump systems that operate frequently (several times a day and often all year), they should be discharged directly to the storm sewer system if at all possible. This will reduce the growth of moss/algae in the summer and problems with ice build-up in the winter.

How do I know if I have a sump pump?

Most homes built after about 1985 have a sump pump even if it operates very rarely. Homes built before that may have had one at the time of construction if they were constructed in exceedingly wet areas or may have had one retrofit to the home.  In any case, all sump systems have one thing in common: a “crock” where the water from the perimeter drains (pipes below the floor) are directed.  Once the water gets to the sump crock, a pump installed in the crock “lifts” the water out of the basement and discharges it to the surface.

A picture of a standard crock is below: 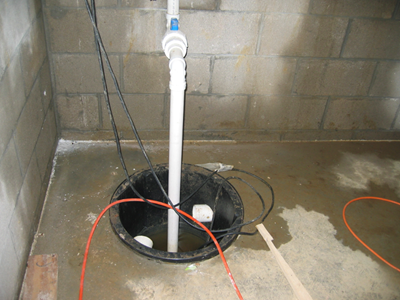 How do I know if I need a sump pump?

If your basement is weeping water through cracks in the basement floor or at the joint between the floor and the walls during routine rain events or constantly during dry weather conditions, it is likely a sump pump system could help alleviate this problem.

What causes water to weep into my basement, necessitating a sump pump and the resulting sump pump discharge?

If you are experiencing these problems, you are in an area with high ground water.  The easiest way to think about this is to visualize your basement as the hull of a boat surrounded by water.  Water is looking for a place to come in, and in the case of a basement, there are easy ways at the joint between the floor and walls as they are not directly connected.  Your basement floor is what is known as a floating slab, meaning it can move up and down independent of the walls, which are anchored below the frost line with (most commonly) spread footings (think of an upside down T).  Since the wall and floor are not connected, a “construction joint” is formed at their intersection allowing a seam for water to weep into the basement.

Why does the area I live in have groundwater?

Many older areas of Madison (and other cities) are built in areas that an engineer would refer to a “made land.”  These areas are old wetlands or low areas that were filled (to differing levels) to allow the construction of homes.  As the amount of precipitation has increased (average annual amounts have increased about 3 inches over the last 20 years), the groundwater table in many of these areas has risen to be in conflict with the basement.  This results in pumps operating 24/7/365 and causing nuisance problems.

The last time the City of Madison had long-term high lake levels was August 2007-August 2008. At that time, it took about another year (until August of 2009) for ground water levels to drop back to more “normal” levels.

What are my options for the physical discharge location for my sump pump?

If Engineering is aware of the plan to install a sump pump before it is installed, we will review records and make recommendations about where the discharge point from the sump pump should be located.  Options include:

When would the above locations be suitable for a sump pump discharge?

Each of the above are suitable in different circumstances and have different problems associated with them as follows:

If my sump pump is operating daily and causing nuisance problems such as algae growth in the summer and icing in the winter, how can I get a direct connection to the storm sewer?

Often if a problem discharge is known, Engineering will try to run storm sewer up to it with a direct bury pipe. This includes installing an inlet and then working with building inspection to write orders to have the property owner connect to the storm.  This can take a year as crews often get requests one year (to put you on the list) and then we complete the work the following summer.

Building Inspection cannot require a property owner to “hook up” to an available storm system. Take steps to adjust the discharge point to not directly discharge onto the adjacent property or Right of Way.