Over the past many years, especially during the summer, Penn Park is often the location for fights, disturbances, gambling and low level drug dealing. Once in a while, these matters escalate into more significant, violent incidents involving weapons, injuries or both. The Brams Addition Neighborhood Association has worked with the South District over this time, trying to keep Penn Park a safe an viable neighborhood park.  A few years ago, a group of nearby residents formed Penn Park Partners, and working with their Neighborhood Officer, did put together some youth programming and evening concert events so that more positive activities would occur in the park.  MSCR at one point ran a summer youth program out of the park, but due to decreasing attendance by area youth, the program was eventually ended.

A simple, well proven strategy for preventing crime in public spaces like a park, is to find ways to bring "legitimate users" into the public space so that those with other intentions consider taking their "dealings" elsewhere., It is equally important to make sure the physical environment is well maintained and attractive to "legitimate users." Recently, a group of South District officers, led by Sergeant Lori Beth Chalecki and Neighborhood Officer Mike Alveraz, have started a "new era" of programming to bring "legitimate users" into Penn Park.  In partnership with the YMCA, the Madison Parks Department, the Devin Harris Foundation, Meridan and Quaker Housing, these officers have organized "fitness" classes at the Penn Park shelter every Tuesday, Wednesday and Thursday evening. The classes started two weeks ago, and thus far have been very well attended, especially the "Zumba" classes.

The South District would like to acknowledge all of our partners in this fitness effort, and especially everyone, young and old, who have attended any or all of these fitness classes. We salute you all and want you to know that you are not only getting into shape, but you are also making Penn Park a better place because you are helping us to increase the "legitimate use" of this public space. A lot of work needs to be done, long term, to the Penn Park shelter to make it more attractive and suitable for our urban community today.  But that said, simply getting people out to use Penn Park today will help to encourage elected officials and community leaders to make sure we ALL work together to make Penn Park a strong asset for the Brams Addition neighborhood. 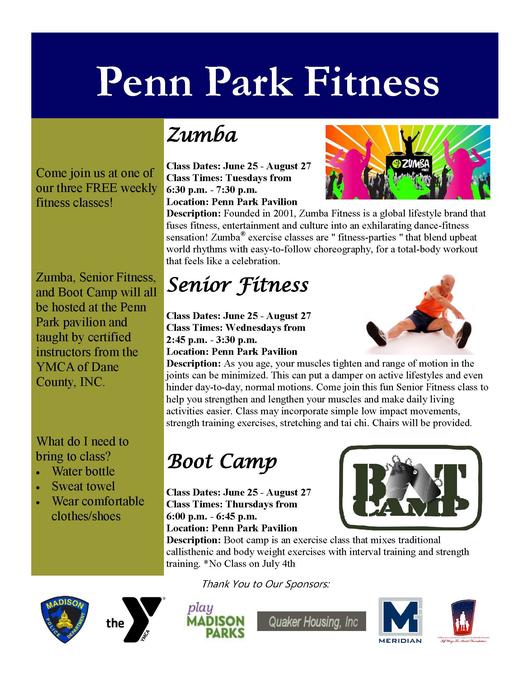