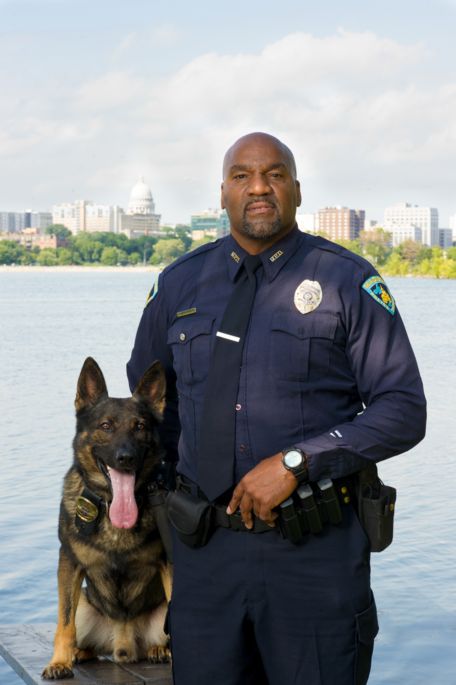 On November 21, 2016, a suspect committed an armed robbery with a handgun.  The suspect initially fled from the scene.  Officer Jim Donnell and K9 Krahnie responded to this first incident.  They tracked from the location of the robbery to a nearby parking lot.  K9 Krahnie indicated the track ended in the parking lot, a trained alert we refer to as a "vehicle pickup" meaning the scent ends and the suspect likely got into a car and left the area.  The investigation continued and led to a vehicle description the suspect used during the robbery.

Later that day, the suspect's car was spotted.  Officers attempted to stop the vehicle which fled from officers once the stop was initiated.  A short vehicle pursuit ensued which ended with the suspect vehicle stopping and the suspect fleeing from his car.  Officer Wilson and K9 Boris were dispatched to track this suspect.  There are not many more dangerous situations for officers to undertake-- such as tracking a known, armed suspect.

Our K9s are trained to track a specific scent.  K9 officers can obtain the scent of the person we're tracking through many means (clothing they've worn, objects they've touched, and so on).  In this case, Officer Wilson used the driver's seat of the suspect's car.  Once Boris was given the suspect's scent, he immediately began tracking from the car across the street and up to a fence along the backyard of a residence.  It was later determined that the suspect jumped the fence at that location.  Officer Wilson and Boris worked around the fence and Boris began tracking the suspect again through some yards.  As they tracked past a house, Boris raised his head up (a behavior we oftentime see when the dogs are close to the subject they're tracking) and began pulling Officer Wilson and his backup officers to the back of the residence.  It was dark outside and there was no illumination in the backyard.  Officer Wilson could see an elevated porch, but did not see the suspect.  Backup officers illuminated the area and could see a pile of leaves under the porch.  Moments later, the suspect's hands emerged from under the pile of leaves as Boris was "announcing" his presence.  The suspect surrendered peacefully to officers on scene.  The dog located a suspect who was in a position to potentially ambush officers and likely played a significant role in the suspect surrendering without further violence.

On November 23, 2016, Officer Wilson and K9 Boris were dispatched to assist officers looking for evidence.  A suspect had crashed his vehicle and fled from the scene.  He was located by officers a short time later, smelled strongly of marijuana, but had nothing on his person. K9 Boris was summoned to sniff for marijuana (or any other contraband) that may have been discarded by the suspect as he fled from his car.  Boris sniffed the area, and likely path, the suspect took from his car to the point he was apprehended.  Inside the fenced yard the suspect found.  Boris began to work intently near an area where the backyard deck and fence line met.  Officer Wilson watched as Boris alerted (laid down) at that location.  Officer Wilson walked over to see what Boris had located.  He observed a plastic bag with several smaller baggies of, what turned out to be marijuana inside.  This evidence would likely not have been located without K9 Boris.

Kudos to Officer Wilson and Boris for their outstanding work.  The team has been working together since March, 2012.  Boris is named after Boris Frank, who is a citizen that played an integral role in the establishment of Capital K9s (http://capitalk9s.org/ ), the non-profit that provides almost all of the financial support for the Madison Police Department's K9 Unit.