Thank you letter from a child

Recently there was a shooting call in the Russett Rd area in which a bullet went through the window of an occupied apartment.  There was a 6 year old girl sitting in a chair who was narrowly missed.   Shortly after this incident her little brother wrote a note to Officer Mike Love, see below: 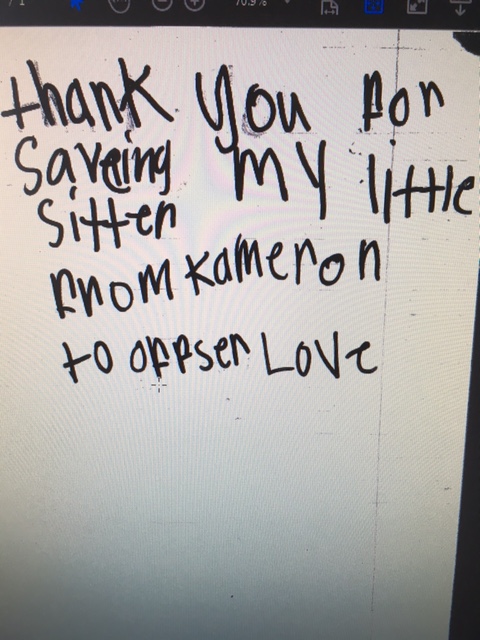 Mike says,  "The letter was written by the brother of the six year old that was sitting in the chair when the round came through the window.  This little boy was around when I interviewed his mother, his sister and his brothers.  He told me he was scared by what had happened and that his sister was scared.  I told him the police were doing everything we could to catch the people that did this.  He then asked me what would happen if the people that did the shooting came back and didn't care that the police were there and wanted to shoot again.  I told him we would protect his family if that happened.  A short time later he came out of the bedroom with the note and gave it to me."

This inicident is still under active investigation and is being handled by the Violent Crime Unit.  Anyone who may have information about this crime is enouraged to call Crime Stoppers at 608-266-6014.