For many years, the Central Police District (CPD) has closely monitored safety issues in the area of 600 University.  While the area has long required additional police presence and activity, in 2017 we've become increasingly alarmed with the patterns and trends we are observing.

Over the last few months, I have worked late on weekend nights several times.  Each time I've witnessed or intervened in fights and disturbances in the Lake--University--Hawthorne--Frances corridor, and each involved multiple people.  On other nights we've had stabbings, weapons such as tasers and OC spray used or threatened (and not by police!), and as many of you are already aware, it appears an altercation that started in the 600 block of University ended with a homicide on Vernon Ave.

Following a series of significant incidents in June, we looked at the data which, unfortunately, proved our concerns to be all too well founded. The below is a snapshot of some of the data we've collected:

[The data was collected for the area of 600 University from January to June for each of the above years.  The trends have continued into mid-July with multiple fights and disturbances taking place]

Not surprisingly the patterns show spikes in activity on Thursday, Friday, and Saturday nights, with many of the calls occurring after 1 AM.  Importantly, the data showed that no one establishment is responsible for generating the issues.  In fact, it is CPD's contention that there are a number of factors impacting safety; we are currently addressing many of these factors including, but not limited to, late night vending, parking, lighting, taxi-stand location(s), and yes, the bars.

For many years, MPD has utilized the Downtown Safety Initiative (DSI) to provide a significant number of extra officers (often 10-15) on weekend nights to help address public safety issues.  While we will continue to deploy DSI on a regular basis, it is clear that their presence is not sufficient to address the problematic behaviors, incidents, and violence.  As with many other issues, it is critical that MPD work in partnership with others to work towards solutions.

Based on our concerns and the data we collected, we invited Alder Verveer, the City Attorney's Office, and the area bar owners to a meeting to discuss the issues and look for ways to work collectively to mitigate them.

In late June we had our first meeting with the bar owners and I am pleased to report that they responded and voiced their support of working collaboratively with MPD to address the issues.  Many good ideas were discussed (many of which at least some of the establishments are already utilizing).  We all understand that safety is critical for the area to stay a vibrant destination.

In the following weeks and months, CPD will continue to meet and work with the bar owners (collectively and individually)--as well as other city agencies and stakeholders.

The map below shows the distribution of calls in the area--note the spread along 600 University; the hotter the color the more calls. 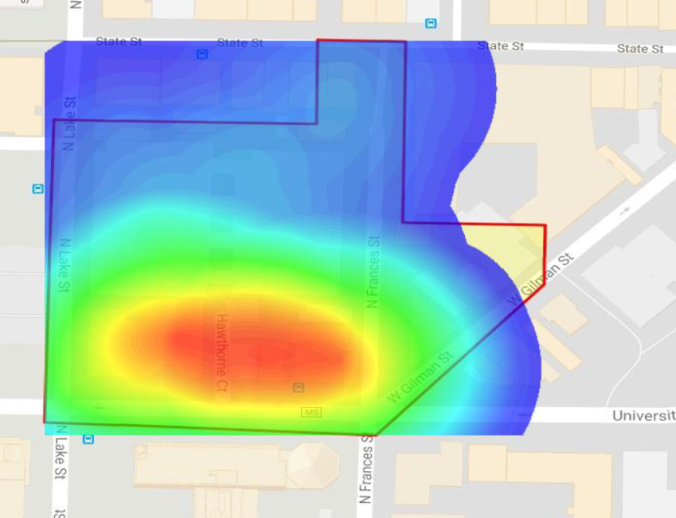