Search For Guns, Rescue Our Kids!

Nationwide, young people are gaining access to guns that can be used under a variety of unlawful circumstances, from committing armed robberies to causing mass casualties within their school communities.

We have seen examples here in Madison of the dangerous consequences associated with not only gun violence, but also the simple act of a juvenile possessing a firearm, real or facsimile, at home, at school, or in our community.

Since the beginning of 2016, over 94 juveniles have been arrested for incidents involving a firearm in the city of Madison. This number includes those times when the firearm was a facsimile weapon, which can be just as dangerous. Facsimile guns can cause significant property damage, serious injuries, and, sometimes, they can look very, very real.

The Madison Police Department recognizes the need to reduce young people's access to firearms, real or facsimile, that could be used for illegitimate reasons. We hope to collaborate with other community stakeholders to raise awareness about firearms related incidents involving Madison's youth. Working with families, we hope to remove unwanted guns, real or fake, from homes in the city of Madison and the Madison area.

Sometimes being a "helicopter parent" can get you a bad rap, but if it means eliminating the opportunity for your child to get his or her hands on a firearm, then go right ahead:

The Madison Police Department responds to calls from city residents who wish to turn in unwanted firearms for safekeeping and/or destruction.  If you have any questions about this process, contact MPD's Crime Prevention Officer, Emily Samson.

Let us work together to make our city a safer place for our kids. 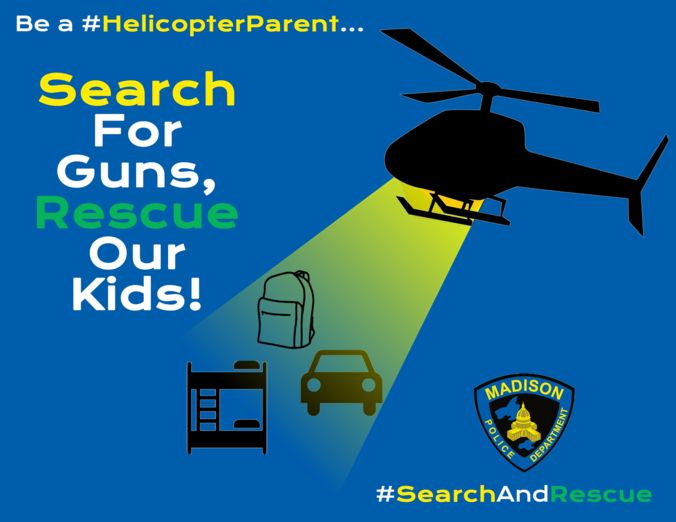