Early Saturday morning (Dec 21 at 12:55 a.m.), South District officers responded to an apartment near the intersection of S Randall and Mound Street for an unknown individual pounding at on the exterior door and incessantly ringing the door bell. The three residents lived in an upstairs apartment and the suspect's behavior was disturbing enough that one of the residents armed himself with a baseball in fear the individual may force entry to the apartment.

Upon the officer's arrival in the area, they were unable to locate the individual. However, were contacted by another couple who reside in a apartment nearby adjacent,apartment and they reported to officers how,an unknown male subject had just moments earlier walked into their UNLOCKED Mound Street apartment. The couple asked the suspect "How did you get in here?" to which the suspect replied "I'm here because I was chosen to be here." The suspect also mumbled other statements regarding coming in from the cold. The couple was able to escort the suspect out of their residence and believed he may have been having some sort of mental health crisis. 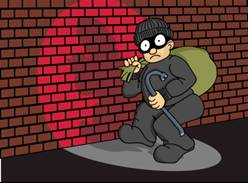