We Are The 28 - The Homicide Lieutenant and the Street Sergeant: MPD Sisters Diane Nachtigal and Trish Drury

Whether downtown at the MPD Central Station, at the theater watching a scary movie, or rocking it out at a heavy metal concert, Lieutenant Diane Nachtigal and Sergeant Trish Drury are sisters who have a strong bond in work and play.  Today, they chat over a cup of Colectivo coffee in Madison's downtown.  "It's great working with my sister," says Diane.  "Police work is so unique.  It is nice to have someone who gets it."

Diane started with the MPD in 2004.  She always dreamed of being a doctor, but plans changed.  She started a family with her husband, and has two children, with six grandchildren.  When asked about policing, Diane replies, "It has challenged me in ways I never thought."  She smiles and adds, "This has been the most fun I have ever had in a job." Trish began her career with the MPD in 2002.  Originally aspiring to be an FBI agent, Trish discovered that the challenges of this career also make it gratifying.  "You have to have fun," she says.  "It can be so stressful that it will eat you up."

As children, Diane and Trish's father was a truck driver, regularly away from home.  Their mother took care of the home, but also worked as a secretary at their high school.  At a young age, both sisters balanced work, school, and family commitments, all inspired by the work ethic of their mother.  It was this willpower that contributed to Trish being one of the first in the Comanche Tribe to obtain a bachelor's degree.

The pair speaks warmly of extended family, and childhood adventures in their blue-backed Colectivo booth. It's a rare quiet moment for the sisters; Diane oversees MPD's Violent Crime Units and Burglary Unit, providing oversight to detectives working homicides, attempted homicides, pattern violent crimes, and burglaries. Trish rides the streets as a patrol sergeant, responding to significant investigations in the field on the afternoon shift. And when you see Trish grin sideways at her sister and Diane's eyes glitter at a sly aside, it's easy to see the bond of duty and friendship these powerful women share. 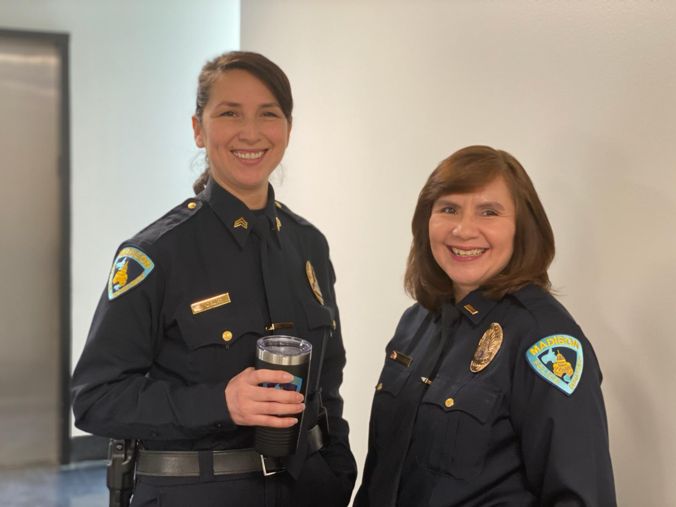 Help us shatter the 28%.  Join The Team Now! https://www.cityofmadison.com/police/jointeam/